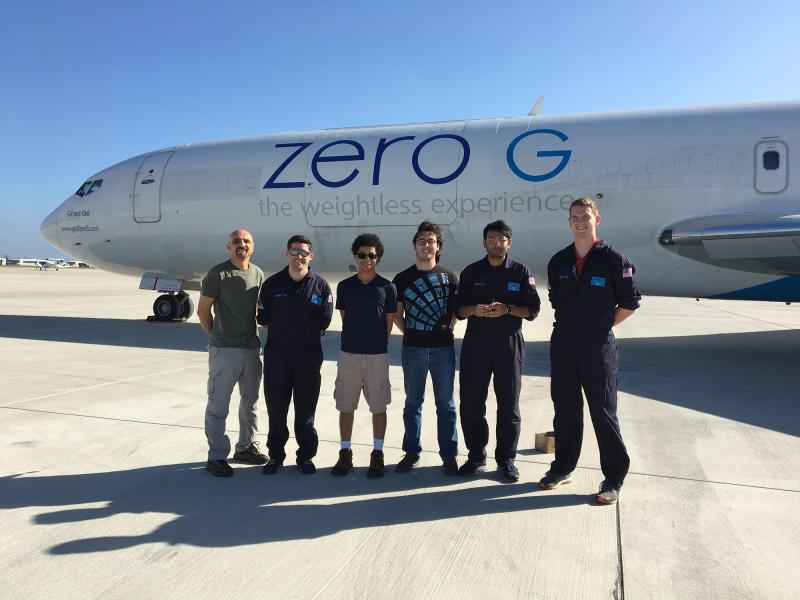 Amir Hirsa, professor of mechanical, aerospace, and nuclear engineering, and a group of undergraduate and graduate students recently returned from Sanford International Airport in Florida after completing an experiment in zero gravity.

“I couldn’t have asked for better people—smarter, more talented, harder-working, or more creative to work with. The ones that weren’t flying were working on their aerodynamics homework in the aircraft hangar,” said Hirsa.

The trip featured the second parabolic flight campaign (the first was in February 2016) for the Rensselaer team, and was in support of an experiment created by the team that will be flown aboard the International Space Station (ISS) in 2019. The purpose of the ISS experiment (the hardware for which is called “Ring-Sheared Drop,” or RSD) is to study the process of proteins aggregating into amyloid fibrils, the same material that forms the waxy substance surrounding and eventually killing the neurons of those afflicted by Alzheimer’s disease. The RSD gives a unique opportunity to study amyloidogenesis at fluid interfaces, mimicking certain aspects of the physiological scenario.

Amyloid fibril formation in proteins is widely studied because of its role in diseases such as Alzheimer’s and Parkinson’s, as well as its promise for advanced materials. In addition to the intrinsically devastating effects of neurodegenerative diseases, these diseases also represent a huge monetary cost in the United States. In 2010, it was estimated that more than 14 percent of the elderly population suffers from dementia and that the cost of care was between $150 and $200 billion annually. The cost is projected to reach $400 billion by 2040.

Zero Gravity Corporation (ZERO-G), the parabolic flight provider for the November 2017 Research Campaign, uses G-FORCE ONE®, a specially modified Boeing 727 airplane. To create weightless environments, the ZERO-G pilots fly the plane in the trajectory of parabolas where in the top part of each arc scientists experience 25 to 30 seconds of weightlessness during which they perform their experiments.

The microgravity environment aboard the ISS is to be utilized to study the biophysics of protein amyloidogenesis. The absence of gravity allows surface tension to provide fluid containment so that protein does not interact with solid walls. Flow effects on protein fibrillization can therefore be studied at fluid interfaces similar to physiological processes. The goal is to advance mechanistic descriptions of fibrillization.

Microgravity is potentially a powerful tool for investigating processes that are sensitive to the presence of solid walls, since fluid containment can be achieved by surface tension. In addition to solid walls, experiments with gravity are also subject to influences from sedimentation of aggregates and buoyancy-driven convection.

The RSD project is in its fifth year; so far, the Rensselaer team has received commitments from NASA totaling nearly $1.5 million and the project has been approved for additional funding until September 2020. The hardware is expected to be on the ISS in early 2019.

Experiments were performed during parabolic flights offered by commercial provider Zero Gravity Corp over a total of 60 parabolas.