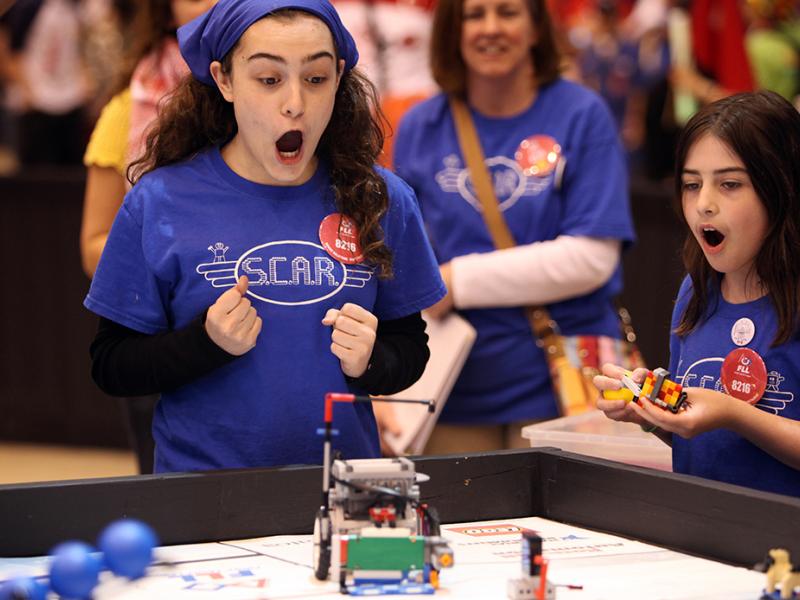 Rensselaer Polytechnic Institute will host the FIRST LEGO League (FLL) Regional Qualifying Tournament on Dec. 16. Area area students have been working together to use their imagination and creativity in combination with science, technology, engineering, and math (STEM) to explore and solve a real-world problem. Photo credit: Archival photo from FIRST

Troy, N.Y. — Can you think about how and why we use water? Just ask the 12 elementary and middle school teams from the Capital Region that will compete in the FIRST LEGO League (FLL) Regional Qualifying Tournament on Dec. 16 at Rensselaer Polytechnic Institute. More than 120 area students have been working together to use their imagination and creativity in combination with science, technology, engineering, and math (STEM) to explore and solve a real-world human water cycle problem as their project.

In the 2017-2018 HYDRO DYNAMICSSM Challenge, student teams are challenged to learn about how we find, transport, use, and/or dispose of water, and propose solutions for any issues they identify.

“Fifty percent of all human illness is the result of waterborne pathogens,” said Dean Kamen, founder of FIRST. “If you gave people clean water, you would empty 50 percent of the hospital beds in the world. We can work together to solve the world’s water crisis, and who better to contribute to this work than the young people who will inherit today’s global issues?”

The global FLL competition is being brought to the region for the 10th time through a partnership between Rensselaer, Hudson Valley FLL, and NY Tech Valley FIRST sponsors. The program kicks off with the opening ceremonies on the Rensselaer campus at 9:25 a.m. in the Darrin Communications Center (DCC), room 308. Immediately following, the robotics competition begins and culminates with a closing ceremony and awards presentation beginning at 2:45 p.m.

FLL is the middle school component of the FIRST Robotics Competition, an international contest that teams professionals and young people to solve an engineering design problem in a competitive way. Over an eight-week period, teams work to build, test, and program an autonomous robot using a LEGO® MINDSTORMS® set to solve missions on an obstacle course.

This year, more than 235,000 children ages 9 to 16 from nearly 90 countries will participate in the HYDRO DYNAMICS challenge. During this year’s competition, teams will work to solve a series of water-usage-themed missions as part of the Robot Game. Missions include removal of a broken water pipe, movement of sludge, filtering water, providing water to make flowers grow, putting out a house fire, and more.

“By challenging teams to understand what happens to our water, and how we can improve the ways we use it, we are also asking students to collaborate in ways they might not otherwise find possible during their normal school day,” said Jordan Vener, who serves as program manager for interactive technologies in the Rensselaer Center for Initiatives in Pre-College Education (CIPCE), which works with area teachers and students to promote the use of robotics in the classroom.

“FLL robotics’ challenges are unique as they call on each team member to apply a range of subject knowledge necessary to solve critical real-world problems,” Vener said. “As teams demonstrate the engineering design process together they also put their social skills to the test. Everyone involved with all things FIRST understands the critical role that teamwork plays to the success of each team. To encourage this cohesiveness, FLL asks its members to embrace a set of values known as the core values. Each year I enjoy making my way to all three judging areas to witness the various innovative and technological solutions the teams have designed. As if that weren’t enough, the robot competition table showcases each team’s ability to strategize using their coding abilities and robot build designs.”

The tournament is supported by 60 volunteers, including Rensselaer students, faculty, and staff, along with area students from high school robotics teams. The teams of judges and referees are comprised of students from Rensselaer’s Science Ambassadors and Engineering Ambassadors organizations, along with longtime friends of CIPCE and FIRST.

“After eight intense weeks, the competition season culminates in high-energy, sports-like tournaments around the globe,” said Paul Schoch, associate professor in the Rensselaer Electrical, Computer, and Systems Engineering department, and director of the university’s Center for Initiatives in Pre-College Education (CIPCE). “Over the years, it has been amazing to watch the teams of children guided by their volunteer coaches as they demonstrate their problem-solving skills, creative thinking, teamwork, competitive play, sportsmanship, and sense of community. We’re proud to again host this competition because events like this not only help students to bring technology to life through their hands-on participation, but it also allows students to tap into their innate curiosity and appetite for discovery, and can also inspire them to consider future careers as scientists and engineers.”

FLL is a partnership between the LEGO Group and FIRST (For Inspiration and Recognition of Science and Technology), which was founded in 1989 by inventor Dean Kamen to motivate young people to pursue careers in science, technology, and engineering.

Accomplished inventor Dean Kamen founded FIRST® (For Inspiration and Recognition of Science and Technology) in 1989 to inspire an appreciation of science and technology in young people. Based in Manchester, N.H., FIRST designs accessible, innovative programs to build self-confidence, knowledge, and life skills while motivating young people to pursue opportunities in science, technology, and engineering. With support from over 200 of the Fortune 500 companies and more than $50 million in college scholarships, the not-for-profit organization hosts the FIRST® Robotics Competition for students in Grades 9-12; FIRST® Tech Challenge for Grades 7-12; FIRST® LEGO® League for Grades 4-8; and FIRST® LEGO® League Jr. for Grades K-4. Gracious Professionalism® is a way of doing things that encourages high-quality work, emphasizes the value of others, and respects individuals and the community. To learn more about FIRST, go to www.firstinspires.org.