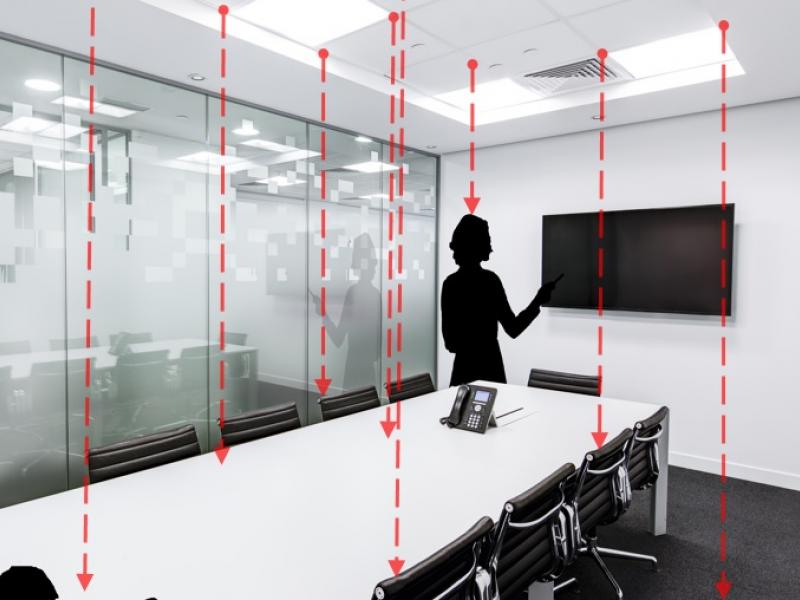 The Center for Lighting Enabled Systems & Applications (LESA) at Rensselaer Polytechnic Institute, along with the University of New Mexico (UNM) and LESA industry partner ABB, are working to create a low-cost, privacy-preserving sensor technology for counting, locating, and tracking occupants in any commercial space that will be developed and tested. Image design courtesy of Vanessa Tan/ University of New Mexico

Researchers at the Center for Lighting Enabled Systems & Applications at Rensselaer Polytechnic Institute, University of New Mexico, and ABB awarded over $2 million from ARPA-E for Transformational Energy Technology

Troy, NY – Recently, the Advanced Research Projects Agency-Energy (ARPA-E) announced $20 million in funding for 15 projects that will develop a new class of sensor systems to enable significant energy savings via reduced demand for heating and cooling in residential and commercial buildings. The Center for Lighting Enabled Systems & Applications (LESA) at Rensselaer Polytechnic Institute, along with the University of New Mexico (UNM) and LESA industry partner ABB, are working to create a low-cost, privacy-preserving sensor technology for counting, locating, and tracking occupants in any commercial space that will be developed and tested. Funding for the entire project is $2.375 million over three years.

Today, about 13 percent of all energy produced in the United States is used to heat, cool, and ventilate buildings, according to ARPA-E. Heating, ventilation, and air conditioning (HVAC) is the largest consumer of energy in commercial buildings, totaling 37 percent of all energy used in this sector. Much of this energy is wasted by heating, cooling, and over-ventilating unoccupied or partially occupied spaces. Due to a lack of accurate and reliable occupancy information, existing building automation and control systems are limited in their ability to substantially reduce HVAC energy use.

“The award from ARPA-E allows LESA to build on its fundamental research showing the power of digitized light, which, when reflected from any object in the space, generates privacy-preserving occupancy and activity data,” said Robert F. Karlicek Jr., LESA director, who also serves as a professor in the Department of Electrical, Computer, and Systems Engineering at Rensselaer. “In this program, the LESA team will apply its lighting toolkit concepts to achieving better energy efficiency in buildings, but this is only the start of how digitized illumination will become an essential part of any Internet of Things (IoT) platform for smart buildings, healthcare, horticulture, new 5G wireless communications, and cognitive environments. We are honored to work with our partners from the University of New Mexico and ABB to take our game-changing energy technology research to the next level.”

The technology uses only high-efficiency, low-power infrared LEDs and photodiodes for distance mapping, and with privacy preserved, can be used anywhere in the building. Studies of prototype occupancy sensing using this technology suggest that energy costs of heating and cooling can be reduced by up to 30 percent by training the building management system to deliver the right temperature air when and where it is needed. The data will also be invaluable for building utilization and security managers, simplifying the installation of new, energy efficient, smart building systems, and services.

According to Karlicek, the sensor significantly extends infrared (IR)-based time of flight (ToF) distance measurement technology previously developed by LESA. The new TOF sensor system will use a patented plenoptic (a light field that captures information about the light field emanating from a scene)detector technology developed by LESA academic partner UNM and will integrate additional sensor signal processing circuitry developed by the LESA optoelectronic illumination and communication (IC) team at Rensselaer.

“The miniature, low-cost TOF sensor array can then be built into lighting fixtures or installed in the ceiling,” Karlicek said. “In addition, several sensors distributed throughout the space will form a sparse network, scanning the entire space for distance information to map the precise number, location, and movement of occupants. In terms of identifying individuals, the sensors only register people’s presence in the space, thus preserving personal privacy.”

UNM will work on the development of a sensor array that provides multiple spatially separated time of flight signals using a unique integrated optical technology developed at UNM, which was recently awarded U.S. Patent 9,766,123 through STC.UNM. The UNM technology uses a grating coupled waveguide as a spectral and angular filter. The input coupling region is displaced from the silicon detection region to provide a unique plenoptic sensor that provides unparalleled spectral and angular resolution while being fully compatible with mature silicon integrated circuit manufacturing technology to ensure low cost.

“It is exciting to see the ideas of digital light that LESA pioneered as aspirational targets become real products that will have a significant societal impact; this is very much a goal of the NSF ERCs, to drive multidisciplinary projects that go from fundamental science to practical application,” said Steven R.J. Brueck, Ph.D., UNM Distinguished Professor Emeritus of Electrical and Computer Engineering, UNM lead for LESA, and emeritus director of the Center for High Technology Materials.

According to the researchers, the data from the sensor network uses the motion and position information to maintain an extremely accurate count of the number of people in the space, and uses a specialized algorithm to track people who may be temporarily lost when moving between sensors, thus reducing the number of sensors needed. The new ToF image processing algorithms will extend the current ToF sensing technology developed previously by LESA’s image processing and controls group at Rensselaer in order to take advantage of the new capabilities of the plenoptic ToF IC that will be developed by the combined Rensselaer and UNM teams.

Occupancy data is then sent to the building control system to manage heating, cooling, and air conditioning (HVAC) energy consumption in order to maximize building efficiency, according to LESA industry member ABB. The goal is to provide optimal human comfort at reasonable cost. ABB, through its U.S. Corporate Research organization in Raleigh, North Carolina, will work closely with the Rensselaer team to validate sensor performance via EnergyPlus modeling and hardware-in-the-loop tests to document energy savings for several types of office settings. The ABB team will also support commercialization efforts, a key deliverable of the DOE’s ARPA-e SENSOR program.

LESA’s vision is focused on creating digitized illumination for new applications in lighting, healthcare, building management, horticulture, and advanced 5G wireless communications platforms. The collaboration with the University of New Mexico and LESA industry partner ABB exemplifies The New Polytechnic, an emerging paradigm for teaching, learning, and research at Rensselaer. The New Polytechnic emphasizes and supports collaboration across disciplines, sectors, and regions to address the great global challenges of our day, using the most advanced tools and technologies, many of which are developed at Rensselaer. Research at Rensselaer addresses some of the world’s most pressing technological challenges—from energy security and sustainable development to biotechnology and human health. The New Polytechnic is transformative in the global impact of research, in its innovative pedagogy, and in the lives of students at Rensselaer.

Funded primarily by the National Science Foundation (NSF), the LESA ERC is an interdisciplinary, multi-university center developing “Smart Lighting Systems that See and ThinkTM”.  The Center engages faculty members, graduate students, research staff, and undergraduates to work on research leading to smart lighting systems with adaptive and controllable properties that will change the way society uses lighting.  The Center joins academia, industry, and government in partnership to produce transformational engineered systems, along with engineering graduates who are adept at innovation and primed for leadership in the global economy.  The LESA ERC is headquartered at Rensselaer Polytechnic Institute in Troy, NY, and partners with Boston University, The University of New Mexico, and Thomas Jefferson University to achieve its objectives.  http://lesa.rpi.edu

About the Center for High Technology Materials (CHTM).

CHTM is a research and education center of excellence in photonics and microelectronics established at UNM by the state of New Mexico in 1983. Major funding from CHTM has come from a variety of government and industry sources including the Air Force Office of Scientific Research, the Defense Advanced Projects Agency, NSF, SEMATECH and many others. Over its history, CHTM has published over 2500 refereed scientific papers, been awarded 204 US patents (through STC.UNM), has received over $200M in research funding, and has initiated 16 companies and worked with many more small companies in New Mexico.

About The University of New Mexico

Founded in 1889 as New Mexico’s flagship institution, The University of New Mexico now occupies nearly 800 acres near old Route 66 in the heart of Albuquerque, a metropolitan area of more than 500,000 people. From the magnificent mesas to the west, past the banks of the historic Rio Grande to the Sandia Mountains to the east, Albuquerque is a blend of culture and cuisine, styles and stories, people, pursuits and panoramas. Offering a distinctive campus environment with a Pueblo Revival architectural theme, the campus buildings echo nearby Pueblo Indian villages. The nationally recognized campus arboretum and the popular duck pond offer an outstanding botanical experience in the midst of one of New Mexico's great public open spaces.

ABB is a pioneering technology leader in electrification products, robotics and motion, industrial automation and power grids, serving customers in utilities, industry and transport & infrastructure globally. Continuing more than a 125-year history of innovation, ABB today is writing the future of industrial digitalization and driving the Energy and Fourth Industrial Revolutions. ABB operates in more than 100 countries with about 136,000 employees. www.abb.com