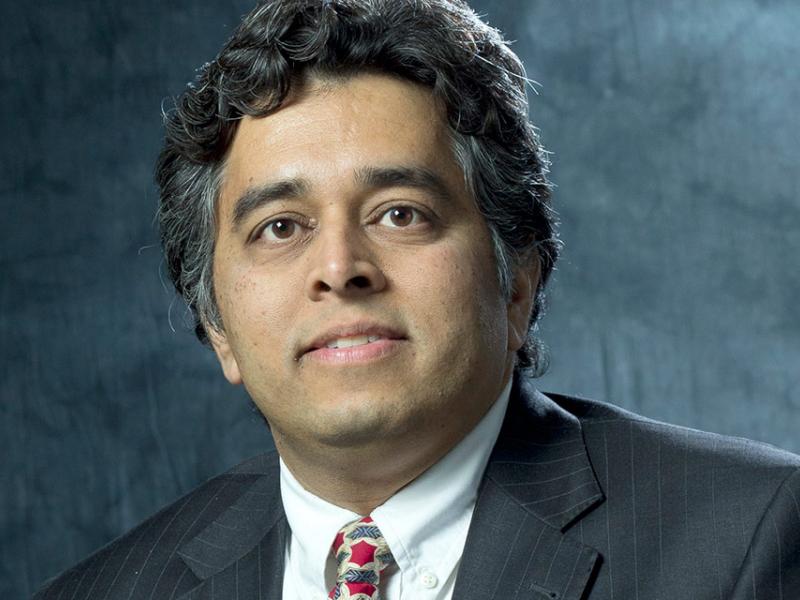 Troy, N.Y. — The American Institute of Aeronautics and Astronautics (AIAA) recently honored recipients of the 2018 Educator Awards presented to several faculty, including rotorcraft and adaptive structures expert Farhan Gandhi, the Rosalind and John J. Redfern Jr. ’33 Professor of Engineering at Rensselaer Polytechnic Institute. The awards were presented during the fifth annual AIAA Science and Technology Forum and Exposition (AIAA SciTech Forum), the world’s largest event for aerospace research, development, and technology, held earlier in January at the Gaylord Palms in Kissimmee, Florida.

During the AIAA SciTech Forum, Gandhi, an innovative researcher in the field of rotary-wing aircraft, who is recognized internationally as a leader in morphing and active rotors, and adaptive cellular structures, was awarded the AIAA Faculty Advisor Award for reviving the AIAA RPI Student Branch; facilitating seminars, astronaut visits, company tours, conference participation; and providing students with opportunity, exposure, and a sense of community through the association with AIAA.

“Rensselaer has a rich and important legacy in aerospace engineering, and I have been immensely pleased to join as a faculty member in the School of Engineering,” said Gandhi, who is also a tenured full professor in the Department of Mechanical, Aerospace, and Nuclear Engineering.

Gandhi joined Rensselaer in 2012, from Pennsylvania State University, where he served as professor of aerospace engineering and deputy director of the Penn State Vertical Lift Research Center of Excellence. In his 17 years at Penn State, he served as adviser to 17 doctoral students and 32 master’s degree students.

“Professor Gandhi is an exceptional researcher, a dedicated educator and an outstanding mentor. This award recognizes his sustained and significant contributions to student mentoring,” said Suvranu De, the J. Erik Jonsson ’22 Distinguished Professor of Engineering and head of the Department of Mechanical, Aerospace, and Nuclear Engineering at Rensselaer.

Gandhi is a prolific researcher. His rotorcraft research programs explore new methods for actively and passively changing the shape of helicopter blades, toward the goal of increasing the capabilities and adaptability of the aircraft, and making them more fuel efficient. For example, chord extension—or widening the blades—would enable helicopters to fly in high-altitude, high-gross-weight, and high-speed conditions, while retraction would reduce profile drag in more benign flight conditions.  He has also extended his research to the areas of full-aircraft morphing and to reconfigurable controls.

Gandhi is active in his field. He served on the American Helicopter Society (AHS) Technical Council from 2007–09, and he was technical chair of the AHS 2009 Annual Forum. Additionally, he served as co-chair of the 2010 International Conference on Adaptive Structures and Technologies (ICAST) and the Chair of the 2016 ICAST. Gandhi is a past chair of the AHS Aircraft Design Technical Committee and the AHS Dynamics Technical Committee. He is a member of the American Institute of Aeronautics and Astronautics (AIAA) Adaptive Structures Committee (chair from 2016-2018), the International Society for Optics and Photonics’ Smart Structures Program Committee, and the ICAST Organizing Committee.

Gandhi has garnered many awards and honors for his work. In 1997, he received the Army Research Office Young Investigator Award, and in 1998 he won the Francois Xavier Bagnoud Award from the American Helicopter Society. Gandhi won a Popular Mechanics Breakthrough Award in 2007, and the Penn State Engineering Society’s Outstanding Research Award in 2009. He was recognized with the AHS Forum Best Aircraft Design Paper awards in 2002,2009 and 2017, and the University of Bristol’s Benjamin Meaker Visiting Professorship in 2009-10. Gandhi is an associate fellow of the AIAA.

The research and faculty advising efforts led by Gandhi exemplifies the vision of The New Polytechnic, an emerging paradigm for teaching, learning, and research at Rensselaer, the foundation of which is the recognition that global challenges and opportunities are so great they cannot be adequately addressed by even the most talented person working alone. Rensselaer serves as a crossroads for collaboration — working with partners across disciplines, sectors, and geographic regions — to address complex global challenges, using the most advanced tools and technologies, many of which are developed at Rensselaer.

The American Institute of Aeronautics and Astronautics (AIAA) is nearly 30,000 engineers and scientists, and 95 corporate members, from 85 countries who are dedicated to advancing the global aerospace profession. The world’s largest aerospace technical society, the Institute convenes five yearly forums; publishes books, technical journals, and Aerospace America; hosts a collection of 160,000 technical papers; develops and maintains standards; honors and celebrates achievement; and advocates on policy issues. AIAA serves aerospace professionals around the world—who are shaping the future of aerospace—by providing the tools, insights, and collaborative exchanges to advance the state of the art in engineering and science for aviation, space, and defense. For more information, visit www.aiaa.org, or follow us on Twitter @AIAA.