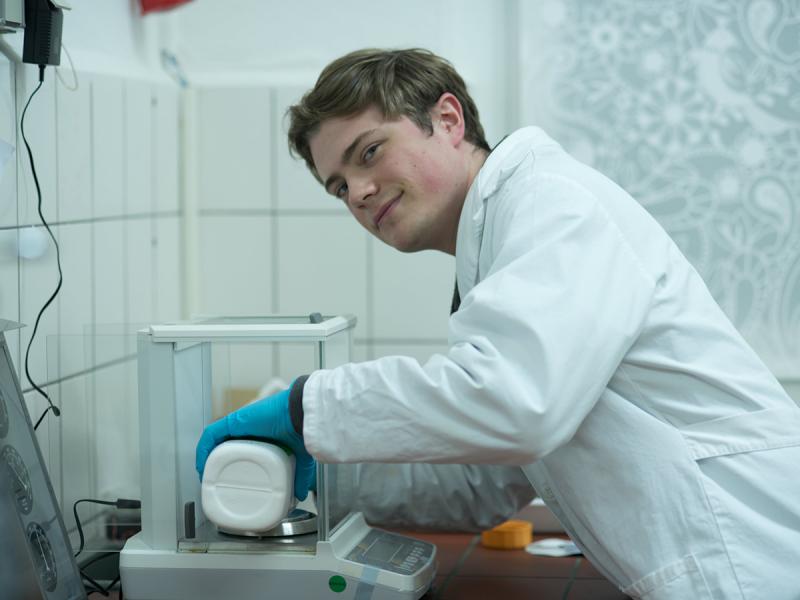 Kent Rapp is working at Willpower Energy, a German startup that helps homeowners produce their own fuel from atmospheric carbon dioxide, water, and electricity.

Kent Rapp ’19, a chemical and biological engineering major, has received a fellowship from the Congress-Bundestag Youth Exchange for Young Professionals (CBYX) program. He has been studying genetic engineering, bioinformatics, and systems biology at the University of Rostock in Germany since October and began the final phase of the fellowship in January with Willpower Energy, a German startup that helps homeowners produce their own fuel from atmospheric carbon dioxide, water, and electricity.

Rapp began the fellowship in August with two months of intensive German language education in Cologne. From there, he traveled northeast to the port city of Rostock to take courses. He shares an apartment with other university students and works in a café.

CBYX was created in 1983 by the U.S. Congress and German Bundestag (parliament) to strengthen ties between the two countries through citizen diplomacy. Each year, 75 Americans and 75 Germans are chosen for the reciprocal, full-immersion program. More than 2,000 American students have participated in the exchange, which typically draws over 500 U.S. applicants a year.

Rapp was drawn to the CBYX program by the opportunity to gain a better understanding of life in Germany and to do his part as a global citizen.

“The U.S. and Germany are leaders in the Western world, and we should seize every chance to connect them,” Rapp said. “I also think it’s important to look outward for solutions. If we combine our different approaches, together we can solve problems that neither culture could solve individually.”

“In an ideal world, I would like to start up a biotechnology company,” Rapp said. “A lot of the work that I have done so far—including my research at RPI—has had to do with synthetic biology, which I find an extremely exciting subject, so the start-up would ideally be in that field. Right now I’m very interested in how we can leverage CRISPR gene-editing technology to accomplish previously unthinkable advancements in not only the medical, but also the industrial, field.”

That enthusiasm and drive are typical of Rapp, who has made the most of his time at Rensselaer. He has worked as an undergraduate research assistant in the labs of Cynthia Collins, associate professor of chemical and biological engineering, and of Mattheos Koffas, Dorothy and Fred Chau Constellation Professor in Biocatalysis and Metabolic Engineering.

“As a global citizen, I hope to be able to tackle the big challenges that face not just my immediate surroundings, but rather the world,” he said. “Right now at Willpower Energy, we’re effectively helping to fight climate change by producing a system to remove carbon dioxide from the air. At Regeneron, I was helping produce medicine to cure a disease that affects people around the world. And with a successful start-up, I hope to be able to at least make a dent in one of the bigger problems we currently face as an increasingly interconnected, globalized, and collaborative world.”