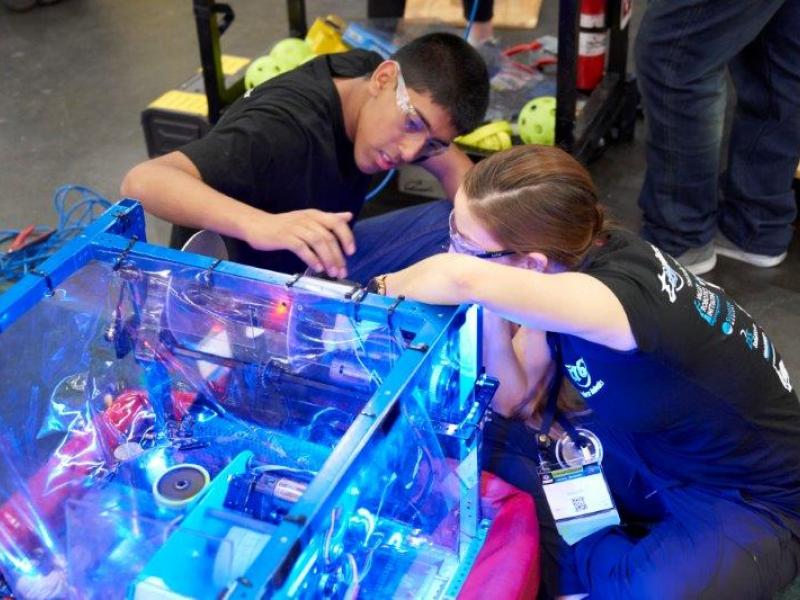 Troy, N.Y. —  This year, 34 teams of high school students from the Capital Region, New York state, Brazil, and Canada—along with hundreds of teachers, industry mentors, parents, and 3,000 pounds of metal, gears, and electronics—will test their skills in a unique competition where math, science, and engineering excellence are celebrated. Rensselaer Polytechnic Institute will once again host the New York Tech Valley Regional FIRST® Robotics competition, March 15-17, on the Rensselaer campus in the East Campus Athletic Village.

Founded by inventor Dean Kamen, who introduced the Slingshot™ water purification system and the “Luke” robotic prosthetic arm, FIRST (For Inspiration and Recognition of Science and Technology) was created to inspire an appreciation of science and technology in young people, their schools, and their communities.

In its 27th season, the FIRST Robotics Competition anticipates that over 91,000 high school students representing 3,647 teams in the U.S. and 27 countries worldwide will be competing in 63 regional events and 10 district events.

In its fifth year, the New York Tech Valley FIRST® Regional Robotics Competition combines the excitement of sports with the rigors of science and technology. Working with adult mentors, students had six weeks to design, build, program, and test their robots to meet the season’s engineering challenge. By combining the excitement of sport and beauty of art with the rigors of science and technology, teams of high school students are challenged to design a team “brand,” hone teamwork skills, and build and program robots to perform tasks against a field of competitors, according to the organization.

The 2018 competition, FIRST POWER UP, finds  teams trapped in an 8-bit video game. Each three-team alliance has three ways to help defeat the boss: Tipping the scale or the alliance’s switch in their favor to earn points, exchanging power cubes for power-ups (force, boost, and levitate) to gain a temporary advantage during the match, and climbing the scale tower to face the boss. The alliance with the highest score at the end of the match, which includes autonomous and teleoperated periods, defeats the boss and wins the game.

“What we’re doing is way more than a competition,” said Paul Schoch, associate professor in the Rensselaer Electrical, Computer, and Systems Engineering department, and director of the university’s Center for Initiatives in PreCollege Education (CIPCE), who is serving as a co-chair along with Deborah Bigelow-Saulsbery. “While not every robot can win, all of the kids do. FIRST inspires a lifelong love of learning that is critical to persevere in today’s ever-changing workforce. We’re developing the innovators, technology leaders, and creative problem-solvers who will make the world a better place.”

This year, more than 1,000 students will compete at the New York Tech Valley Regional to earn a spot at the international FIRST® Championship to be held April 18-21 at the George R. Brown Convention Center in Houston, Texas, and April 25-28 at the Cobo Center in Detroit, Michigan.

By participating in FIRST, students gain confidence to explore the innovation process while learning valuable science, engineering, technology, teamwork, and problem-solving skills. FIRSTRobotics Competition participants are eligible to apply for more than $50 million in FIRST Scholarships from leading colleges and universities. Students also learn and apply the FIRST ethos of Gracious Professionalism®.

Accomplished inventor Dean Kamen founded FIRST® (For Inspiration and Recognition of Science and Technology) in 1989 to inspire an appreciation of science and technology in young people. Based in Manchester, N.H., FIRST designs accessible, innovative programs to build self-confidence, knowledge, and life skills while motivating young people to pursue opportunities in science, technology, and engineering. With support from over 200 of the Fortune 500 companies and more than $50 million in college scholarships, the not-for-profit organization hosts the FIRST® Robotics Competition for students in Grades 9-12; FIRST® Tech Challenge for Grades 7-12; FIRST® LEGO® League for Grades 4-8; and FIRST® LEGO® League Jr. for Grades K-4. Gracious Professionalism® is a way of doing things that encourages high-quality work, emphasizes the value of others, and respects individuals and the community. To learn more about FIRST, go to www.firstinspires.org