Proof of Water Wires Motivated by a Biological Water Channel 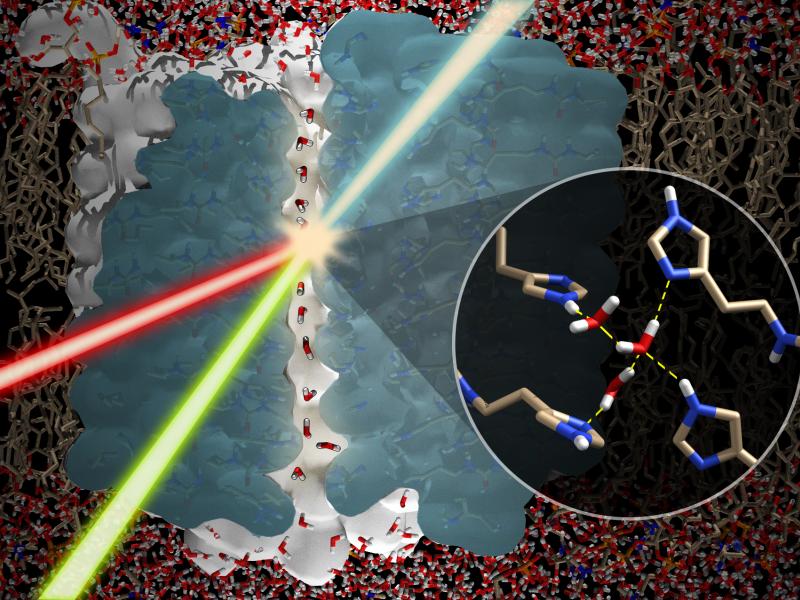 Proof of Water Wires Motivated by a Biological Water Channel

The discovery by a team of researchers co-led by Georges Belfort could lead potentially to artificial aquaporin membranes for desalination systems.

Aquaporins are proteins that serve as water channels to regulate the flow of water across biological cell membranes. They also remove excess salt and impurities in the body, and it is this aspect that has led to much interest in recent years in how to mimic the biochemical processes of aquaporins potentially for water desalination systems.

An international team of researchers co-led by Georges Belfort has discovered water, in the form of “water wires,” contained in another molecule—the imidazole—a nitrogen-based organic compound that could be used as a potential building block for artificial aquaporins. The findings were recently published in Science Advances by the American Association for the Advancement of Science. Belfort is Institute Professor and professor of chemical and biological engineering at Rensselaer Polytechnic Institute.

Belfort’s colleague, Mihail Barboiu, a research leader at the European Membranes Institute (EMI) in France, has synthesized and studied the dynamics of a ring structure of the imidazole embedded in a supported lipid bilayer (i.e., in a synthetic model of a biological membrane surrounding a cell). EMI operates under the auspices of several organizations, including France’s National Center for Scientific Research (abbreviated CNRS in French).

X-ray studies by Barboiu and dynamic computer simulations by CNRS researcher Marc Baaden show that the imidazole’s ring structure makes the molecule an ideal candidate to learn about how artificial aquaporins could be developed. In theory, assembled imidazole molecules act like an aquaporin by allowing water molecules to enter and possibly flow through the center of the ring structure while keeping out other molecules.

Still, there was no direct proof that water existed inside the imidazole water channel. To find out, Barboiu enlisted the help of Belfort and Poul Petersen, assistant professor of chemistry at Cornell University.

Through their experimental studies, Belfort and Petersen have found that not only does water exist in the imidazole water channel, but also that the imidazole ring construct induces the water molecules to self-assemble into a highly oriented linear chain structure—or what the researchers have dubbed “water wires.”

“For the first time, we have made a direct observation of this unique water structure inside a synthetic water channel that mimics an aquaporin,” Belfort said.

Belfort and his colleagues also discovered that the chirality of the imidazole molecules orients the water molecules and could increase the permeability of water through the water channel compared with achiral (i.e., not chiral) imidazole molecules that they also assembled. Chirality happens when a mirror image of an object is not superimposable—for example, your left and right hand.

In the case of the imidazole molecule, its chirality depends on the way that the groups of atoms in a molecule are organized. As Belfort explained, the chiral imidazole atoms can be seen as spokes on a bicycle wheel that cannot be superimposed on the “spokes” of an imidazole that is achiral.

“If you place several of these rings on top of each other like a pile of pancakes, the center (the ‘axel’) of the spokes holds the water molecules and enables them to connect with one another in an ordered way to form a water wire,” he said. “Our results also showed that the water wire changed its orientation when imidazole chirality changes, further confirming that the chiral shape of the imidazole controls how the water behaves.”

In their study, the researchers used artificial water channels that they created from imidazole self-assembled structures inside lipid bilayers, thin membranes that form a continuous barrier around cells. The imidazole building blocks were synthesized by Barboiu and his group in France. Belfort’s research group then assembled the lipid bilayers to contain the imidazole structures.

Belfort’s team used a quartz crystal microbalance (QCM) to measure the assembly and water content. Researchers use QCM to measure small mass changes on a vibrating quartz crystal. The lipids containing the water wire structures were then carried to Cornell by Mirco Sorci, a research associate in Belfort’s lab, to further analyze the presence of the water wire and its orientation, using a special instrument that measures hydrogen bonds between water molecules called a sum frequency generation spectrometer.