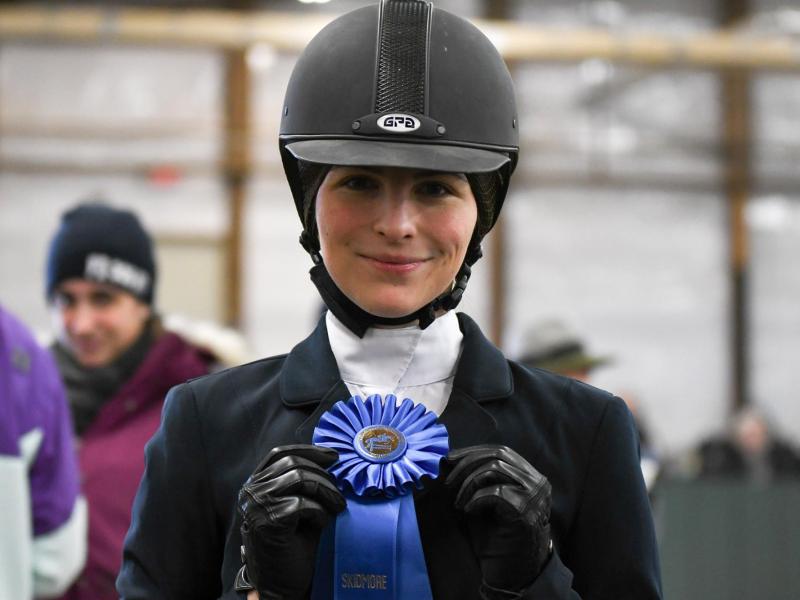 Lessons from riding translate into lessons for life

Along with the challenges of pursuing a dual degree at a technological university, Alejandra Jaime-Rodriguez joined the university’s equestrian team, and with passion and perseverance, but no prior experience, qualified for a regional competition of the Intercollegiate Horse Show Association.

Unfortunately, just prior to the competition, she was thrown from a horse, and was too sore to compete. She did, however, return to riding as soon as she was able.

“You don’t learn how to fall; you learn from the fall—learn from it and get back on the horse,” she says.

Jaime-Rodriguez has been riding at a fast pace since entering Rensselaer Polytechnic Institute four years ago, taking advantage of a full stable of university experiences including a rigorous academic schedule, three different undergraduate research experiences, a corporate internship, and a semester abroad at the Technical University of Denmark.

She entered Rensselaer knowing she wanted to major in economics, spurred on by dinner table discussions about the laws of supply and demand with her stockbroker father. But she wanted to add a dual degree in another subject, and to take advantage of Rensselaer’s strengths in technology and mathematics, reasons she chose to attend in the first place.

Industrial and management engineering was not unknown to Jaime-Rodriguez, based on her mother’s career, and she thought it would be a good fit with her interests in statistical analysis and supply chain management.

Jaime-Rodriguez eagerly pursued research opportunities in economics and internships in industrial and management engineering, and has been described by faculty as someone who “has a penetrating intellect, is deeply immersed in her education, and has shown a maturity and curiosity far beyond her years.”

This year she has been working with faculty in the Economics Department to create a large database of U.S. Immigrations and Customs Enforcement (ICE) detainees in the United States to be used in analyzing the impact of sanctuary city policies on crime rates.

Furthermore, Jaime-Rodriguez has a passion for traveling—unsurprising for someone who has lived in three countries and eight cities. Already a citizen of Mexico and Spain, on her 22nd birthday in November 2017 she became a citizen of the United States of America.

Moving so frequently, which came about because of her mother’s jobs, forced her to be very social, says Jaime-Rodriguez. “Being the new girl every other year, I had to make friends with people who had already been friends for years. It forces you to be very adaptable.”

Jaime-Rodriguez spent one internship at a Procter & Gamble manufacturing facility, where she worked on different projects. While she enjoyed working in manufacturing, she became interested in consulting after speaking with a Deloitte employee during the campus career fair.

So this summer, before returning to Rensselaer to pursue a master’s in quantitative finance and risk analytics as part of the Institute’s co-terminal program, she has accepted an internship at Deloitte as a business technology analyst.