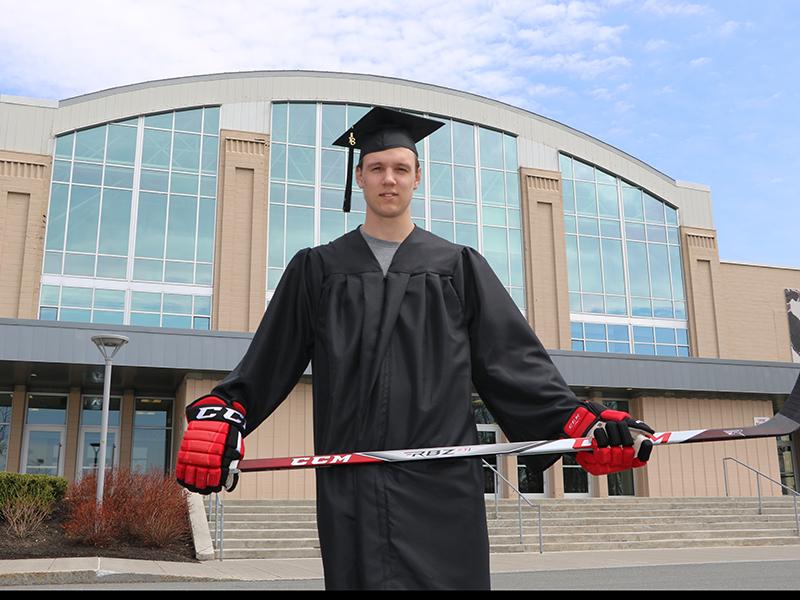 Rensselaer Researchers To Focus on Improving the Life and Efficiency of Nuclear Reactors
Rensselaer Researchers Propose an Affordable and Sustainable Alternative to Lithium-Ion Batteries
Consumers Are Likely To Be Susceptible to Slick Graphic Design of Trading Platforms
RPI Week on The Academic Minute
Rensselaer Announces Institute for Data, Artificial Intelligence, and Computing
May 11, 2018

From Sweden to Troy and beyond

For many, college coursework is difficult enough in your first language. For Swedish-born Viktor Liljegren, who will be graduating from the Lally School of Management at Rensselaer Polytechnic Institute with a degree in business and management on May 19, navigating the last four years as a student-athlete has been a challenge, but he is proud of what he has been able to accomplish.

When Liljegren arrived in Fairbanks, Alaska, to play junior hockey in the fall of 2013, he spoke English well enough to get by, but did not have plans to attend college, let alone a U.S. university. He was approached by former Rensselaer head coach Seth Appert, who made the trip up north to meet face-to-face, and was sold on what the program had to offer.

He made one trip to campus before making his final decision, including a visit to the historic Houston Field House. “I thought it was a really cool arena,” he says. “The first time I got in there, it felt like it was a place with a great atmosphere. I found out early in my career that it was the case.”

Rensselaer’s academic reputation was also a reason why Liljegren chose to attend, as well as a location closer to the East Coast, which meant a shorter flight back to his homeland.

On the ice, Liljegren opened his collegiate career with a bang, scoring a goal in his first appearance—a 3-2 victory at Notre Dame on October 10, 2014. Throughout his first year, he excited the home crowd with his size and skating ability, playing in all but one game and recording seven goals and assisting on five more for 12 points. The team concluded the year with a memorable playoff series victory over rival Clarkson.

Liljegren’s biggest challenges in the early stages came from the language barrier and having to learn in a language other than Swedish for the first time in his life. “Coming in as a freshman and speaking a second language, then reading English in an educational setting, was a challenge.”

He credits those around him—teammates, coaches, and professors—for helping him through the tough times early on and he now enjoys passing along what he learned about Rensselaer, both on and off the ice, to the younger players who have come after him. “Coming in, you’re a follower and you see how the older guys do things and what kind of habits they have. When you’re stepping up to the plate and being a leader, you pass along your experiences,” he says.

During his sophomore season, Liljegren and the Engineers found early success, especially in ECAC Hockey play, going unbeaten in their first six conference games. They wound up sweeping the season series with Union and posting an 18-15-7 record, with Liljegren scoring five goals with 10 assists for 15 points.

With career-highs in goals (10) and points (18) as a junior, Liljegren found his stride on the power play, scoring five times. He once again played in every game, proving his durability through the longest season in collegiate athletics.

A coaching change heading into his senior year could have been an issue for some, but Liljegren and classmates Jared Wilson and Mike Prapavessis took it upon themselves to help the team through the transition. His spell of injury-free luck came to an end 30 games into his final year, ending his consecutive games streak at an impressive 129, after he was knocked out of a contest against Dartmouth on February 9.

Two weeks later, he found himself back in the lineup. It was Senior Night and with his mother Annika in the stands, he was not going to miss it. Playing at less than 100 percent, Liljegren still managed to record an assist—the 27th of his career and his 58th and final point at Rensselaer. By suiting up in all three of RPI’s ECAC Hockey playoff games at Colgate the following weekend, he joined a group of just seven Engineers to play in over 150 games in their careers.

After the RPI season ended, Liljegren signed a contract to play with the Reading Royals of the ECHL, coached by former Engineers captain Kirk MacDonald ’07. “I thought it was really cool to have a coach who had been through what I’ve been through,” he says. “I’m really happy that Kirk gave me the chance to play pro hockey at the end of the year.”

He played in 10 regular-season games and three playoff games with the Royals, scoring a goal and three assists.

After getting his sampling of professional hockey, it was back to campus to finish off the semester for Liljegren. It’s a place that has grown on him over the last four years and where he says he even embraces not owning a car. “I like that it’s a smaller campus and anywhere you need to go, you walk within 10 minutes.”

“I’m really excited for what the future holds,” Liljegren says. “I hope to play professionally for as long as I can, whether it be here in the United States or back in Europe.” As an RPI alumnus, he knows he has a solid backup plan. “I’m not too worried about it as I’m going to have a degree to lean back on.”