Meet the Rensselaer Polytechnic Institute Class of 2018: An Overview of Commencement 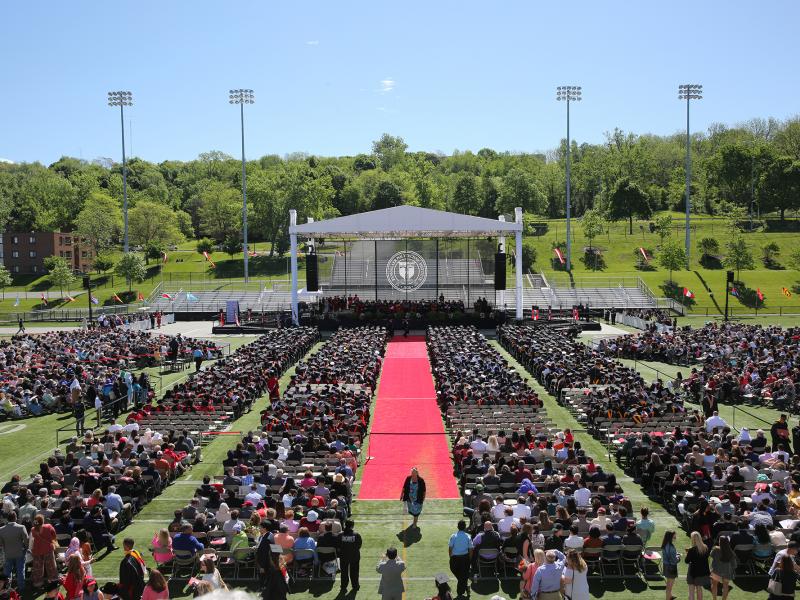 Meet the Rensselaer Polytechnic Institute Class of 2018: An Overview of Commencement

Rensselaer set to host 212th Commencement Ceremony on May 19

On Saturday, May 19, 1,945 students will receive degrees from Rensselaer Polytechnic Institute, the oldest technological research university in the United States, beginning at 8:15 a.m. in the East Campus Athletic Village (ECAV) stadium on campus. They represent the next generation of leaders, engineers, scientists, entrepreneurs, patent holders, game designers, architects, and innovators, in fields ranging from engineering to architecture, fine arts to science, game design to information technology, and business to active military service.

During the 212th Commencement Ceremony, Rensselaer will award a total of 2,010 degrees. They include: 161 doctoral degrees, 417 master’s degrees, and 1,432 bachelor’s degrees. Some graduates have earned more than one degree. This year, more than 10,000 graduates and visitors are expected to attend the ceremony.

A Global Community
In 2018, graduating students come from more than 40 states, in addition to New York. The Class of 2018 contains graduates from 35 other nations, including Brazil, China, Ecuador, India, Ireland, Spain, Switzerland, the United Kingdom, and Vietnam.

The Commencement Speaker Is…
Herbie Hancock, the legendary jazz pianist and composer, will deliver the 2018 Commencement Address. Hancock has been an integral part of every popular music movement since the 1960s. As a member of the Miles Davis Quintet that pioneered a groundbreaking sound in jazz, he also developed new approaches on his own recordings, with record-breaking albums such as Head Hunters, which combined electric jazz with funk and rock in an innovative style that continues to influence contemporary music. Hancock received an Academy Award for his ’Round Midnight film score and 14 Grammy Awards, including Album of the Year for River: The Joni Letters. He is Creative Chair for Jazz for the Los Angeles Philharmonic Association, Institute Chairman of the Thelonious Monk Institute of Jazz, and founder of the International Committee of Artists for Peace.

Taking the Podium
Rensselaer President Shirley Ann Jackson will address members of the Class of 2018. The Honorable Shirley Ann Jackson, Ph.D., is the 18th president of Rensselaer Polytechnic Institute, where she has led an extraordinary transformation since 1999. Her career encompasses senior leadership positions in academia, government, industry, and research. A recipient of the 2014 National Medal of Science, she is the former Vice Chair of the Board of Regents of the Smithsonian Institution and serves on the boards of major corporations that include IBM, Medtronics, and FedEx. In 2014, U.S. President Barack Obama appointed Dr. Jackson as Co-Chair of the President’s Intelligence Advisory Board. From 2009 to 2014, she served on the President’s Council of Advisors on Science and Technology. She also was a member of the U.S. Secretary of Energy’s Advisory Board and the U.S. Secretary of State’s International Security Advisory Board. From 1995 to 1999, Dr. Jackson was Chairman of the U.S. Nuclear Regulatory Commission. She holds an S.B. in Physics and a Ph.D. in Theoretical Elementary Particle Physics, both from MIT.

Class President Brenna Buckley will also address the graduates. An aeronautical engineering major from Hauppauge, New York, she has been the Class of 2018 president for the past three years, and also has been an active member of her sorority, Alpha Gamma Delta. She will begin her career at Electric Boat in New London, Connecticut.

The Honorable Mary Jo White will receive an Honorary Doctor of Laws. White is a litigation partner and senior chair at Debevoise & Plimpton and former chair of the U.S. Securities and Exchange Commission. Previously, as the U.S. Attorney for the Southern District of New York, she oversaw major prosecutions of white collar crime, organized crime, and international terrorism.

Eric Lander will receive an Honorary Doctor of Science. Lander is president and founding director of the Broad Institute of MIT and Harvard. A geneticist, molecular biologist, and mathematician, he has played a pioneering role in the reading, understanding, and biomedical application of the human genome, and was a principal leader of the Human Genome Project.

Alicia Boler Davis ’98 will receive an Honorary Doctor of Engineering. As the executive vice president of General Motors Global Manufacturing, she leads GM’s global advanced manufacturing operations, manufacturing engineering, and labor relations organizations, and is one of the most powerful women in automotive manufacturing.

All in the Family
The Rensselaer degree is well-known throughout the world as a symbol of technological excellence and achievement. Rensselaer alumni and alumnae are recognized leaders in their fields. This year, 83 members of the Class of 2018 are Rensselaer “legacies,” students with relatives who attended the university.

Awarding Excellence in Counseling
Eddie Ade Knowles, professor of practice in the School of Humanities, Arts, and Social Sciences, has been selected as the recipient of the David M. Darrin ’40 Counseling Award, which will be presented during Commencement. This award was established by David M. Darrin ’40 to recognize a faculty member who has made an unusual contribution in the counseling of undergraduate students. The selection of the award recipient is made by Phalanx, Rensselaer’s student leadership honorary society. Knowles was cited for his compassion and dedication to students both in and out of the classroom.

Class of 2018 Parting Gift: Supporting Future Students
Each year at Commencement, the graduating class presents the university with a unique class gift. This year, the Class of 2018 has chosen to raise funds to supplement the Student Relief Fund initiated by the Class of 2017. This fund will support undergraduate students whose financial situation abruptly changes in a manner which may impede their continued enrollment at Rensselaer. Thanks to the fundraising efforts of the class, students with unforeseen financial hardship will be able to apply for this scholarship to cover medical bills, travel expenses, or other needs. To date, through Class of 2018 fundraising efforts, the class has raised over $9,120 to support the Student Relief Fund.

Please Note: All numbers and facts include Troy and Hartford campus students and degrees issued in August and December 2017. All of the numbers cited are estimated as of May 15, 2018, and are subject to change up until Commencement.