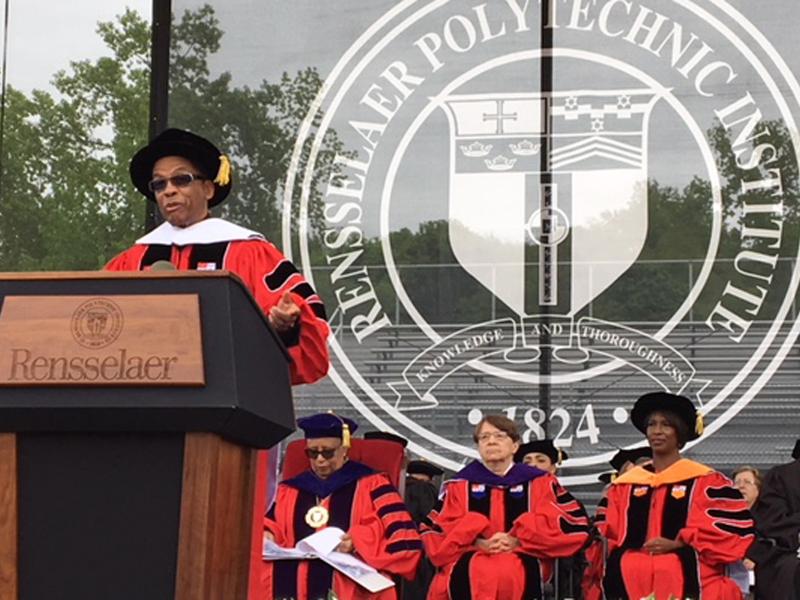 Rensselaer Boasts New State-of-the-Art X-Ray Diffractometer To Support Regional Scientific and Technological Research
Rensselaer Researchers To Focus on Improving the Life and Efficiency of Nuclear Reactors
Rensselaer Researchers to Address Big Data Challenges
Prediction of Human Movement During Disasters To Allow For More Effective Emergency Response
Stress, not laziness, is behind procrastination. Here are 3 ways to ‘retrain your brain’
May 19, 2018

When legendary jazz pianist and composer Herbie Hancock took the podium at the 212th Commencement at Rensselaer Polytechnic Institute on Saturday, he told a story from his own years as a young graduate, at a time when he was playing piano with the Miles Davis Quintet. In the midst of a “magical” performance in Stockholm, Sweden, as Davis was building his solo, Hancock played a chord “that was so wrong, it was like lighting a match to the gorgeous house of sound we had been building.”

Davis took a breath, then played some notes that made Hancock’s chord “right.”

“That was not just a great music lesson for me, it was one of the greatest life lessons I have ever gotten, in the value of listening to other perspectives, suspending judgment, and expanding yourself by including and caring about others,” said Hancock. “Because it’s all about heart.”

In his address to graduates, Hancock said the best advice he can bestow on the Class of 2018 is this: “Getting your life and career together means getting your humanity together.” Hancock said that to truly achieve our potential and mission in life, we must be willing to look within ourselves and accept diverse perspectives.

“Whenever we don’t like the circumstances in which we find ourselves, we tend to look outside of ourselves for who or what is at fault. But that is a false assumption,” said Hancock. “Nine times out of 10, you are your worst enemy. If we take it upon ourselves to transform ourselves, we transform others and the world around us.”

Hancock addressed 1,945 graduates and attendees at the 212th Rensselaer Commencement today, held at the East Campus Athletic Village. During the ceremony, Rensselaer awarded a total of 2,010 degrees. They include: 161 doctoral degrees, 417 master’s degrees, and 1,432 bachelor’s degrees. Some graduates have earned more than one degree.

Rensselaer is focused on the paradigm of The New Polytechnic, which Jackson said “exploits the advances brought about by the emergence and the merging of the biological, digital, and physical worlds; advances in genomics, computation, and artificial intelligence, and the Internet of Things, in order to address great global challenges.”

“Interestingly enough, these same advances have given rise to new communications platforms and with them the amplification of the voice of one, or a few, which can be very important, but which can sometimes crowd out the voices of others,” Jackson said. “But what cannot be crowded out is the personal and collective amplification of what you do with your Rensselaer education, with confidence and courage.”

Class of 2018 President Brenna Buckley told graduates, “The most valuable thing RPI has given to us is experience. Somewhere along the way, not realizing it, we were given a challenge. We stumbled across a problem or maybe a few, that we had no idea how to solve,” said Buckley. “Because of these experiences, the phrase ‘Why not change the world’ is said to us not as a question, but as an expectation. Our experiences, regardless of the degree we are receiving today, have given us the ability to go out and make big changes.”

The graduates were addressed by each of the honorands. The Honorable Mary Jo White, former U.S. Attorney for the Southern District of New York and former chair of the United States Securities and Exchange Commission, advised the graduates to “stay forever young.”

“Forever young to me means you stay bold, curious, and open to all of life’s and the world’s challenges, but also to its joys and just the pure fun of things. You avoid ruts, take chances, make changes throughout your lives and you do new and difficult things,” said White. “Most importantly, staying forever young means keeping your idealism and following your passions.”

Genomic science pioneer Dr. Eric Lander reminded graduates that while science and technology are “together the most transformative force there is for bettering the human condition,” progress comes with responsibility.

“Progress depends on three sacred commitments,” said Lander. “A commitment to facts: if we deny inconvenient facts or traffic in ‘alternative facts,’ the whole structure on which progress rests quickly crumbles. A commitment to people: we must include everyone, because brilliant ideas are broadly distributed across all groups and breakthroughs come by approaching problems from diverse perspectives. And, a commitment to responsibility: we cannot just discover and invent; we must ensure that our discoveries and inventions are used to serve humanity.”

Recalling her own time at Rensselaer, Alicia Boler Davis ’98, executive vice president of General Motors Global Manufacturing, told graduates they were well-prepared for a rapidly changing, increasingly global economy, provided they remembered what they learned at Rensselaer.

"Confidence, curiosity, and courage … have carried me through my career. And, Class of 2018, they can do the exact same thing for you,” said Boler Davis. “As you know, our world faces many challenges and has many problems that can only be solved by science and engineering. In other words, what the world needs now is you.”