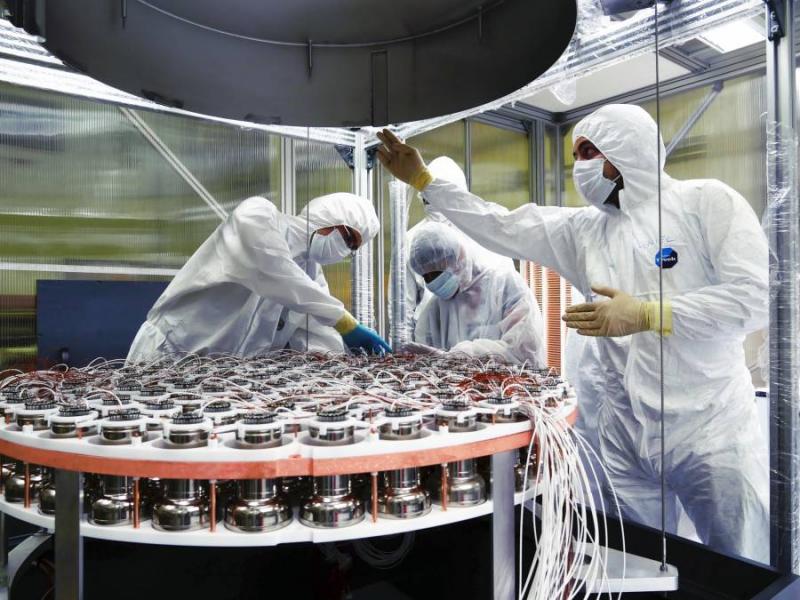 Rensselaer Researchers Receive $350k Grant To Explore Cellular Mechanisms Linked to Cancer
Rensselaer Researchers Propose an Affordable and Sustainable Alternative to Lithium-Ion Batteries
The Future of Outdoor Dining
Consumers Are Likely To Be Susceptible to Slick Graphic Design of Trading Platforms
Cold Temperatures Paved the Way for T. Rex
May 29, 2018

The results, presented Monday in a seminar in Italy at the Gran Sasso Underground Laboratory (LNGS), were produced using an active target volume of 1,300 kilograms of Xenon, the first search for dark matter that has monitored the equivalent of one ton of xenon for an entire year.

“We now have the tightest limit for what is known as ‘the WIMP-nucleon cross section,’ which is a measure of the effective size of dark matter, or how strongly it interacts with normal matter,” said Ethan Brown, a member of the XENON Collaboration, and assistant professor of physics, applied physics, and astronomy at Rensselaer Polytechnic Institute. “With these results, we have now tested many new theoretical models of dark matter and placed the strongest constraints on these models to date.”

Dark matter is theorized as one of the basic constituents of the universe, five times more abundant than ordinary matter. But because the dark matter particles known as “weakly interacting massive particles,” or “WIMPs,” cannot be seen and seldom interact with ordinary matter, their existence has never been confirmed.

Several astronomical measurements have corroborated the existence of dark matter, leading to a worldwide effort to directly observe dark matter particle interactions with ordinary matter. Up to the present, the interactions have proven so feeble that they have escaped direct detection, forcing scientists to build ever-more-sensitive detectors.

Since 2002, the XENON Collaboration, incorporating 165 scientists from 12 countries, has operated three successively more sensitive liquid xenon detectors in LNGS in Italy, and XENON1T is its most powerful venture to date and the largest detector of its type ever built. Particle interactions in liquid xenon create tiny flashes of light, and the detector is intended to capture the flash from the rare occasion in which a dark matter particle collides with a xenon nucleus.

The results analyze 279 days of data, according to Elena Aprile, a professor at Columbia University and project lead. During that time, only two background events were expected in the innermost, cleanest region of the detector. However, no events were detected, suggesting dark matter particles must be even smaller than previously thought. A portion of the data analysis was conducted at Rensselaer, as scientists from collaborating institutes around the world convened at the Institute late in 2018 to review data and finalize analysis routines that would eliminate irrelevant information from the collected data.

The sensitivity of the detector is a function of its size and its “silence.” Although dark matter interactions are rare, interactions with other forms of matter are common, and a sensitive detector is designed to minimize those interactions. To shield it from natural radioactivity in the cavern, the detector (a so-called Liquid Xenon Time Projection Chamber) sits within a cryostat submersed in a tank of water. A mountain above the underground laboratory further shields the detector from cosmic rays.

Even with shielding from the outside world, contaminants seep into the xenon from the materials used in the detector itself and, among his contributions, Brown is responsible for a sophisticated purification system that continually scrubs the xenon in the detector. As the size of detectors have grown, so has the complexity of the purification system—not only is there more xenon to clean, but it must be kept cleaner so that light and charge may move through the greater volume of the detector. In the current phase, Brown said his team “scaled up, adding more pumps and more purifiers” to the system.

“Our work has maintained a high level of purity for the largest quantity of xenon over the longest period of time ever,” said Brown. “It’s an accomplishment that allows other experiments to build on the performance of this purification system.”

In the next phase, Brown will introduce a new solution, a newly designed pump built with ultra clean parts in his laboratory at Rensselaer in collaboration with researchers at Stanford and at Muenster University in Germany. Where the current pumps contribute one-third to one-half of the total radon in the experiment, the new pumps will be essentially radon-free, removing one of the largest contributions to background.

Research on dark matter fulfills The New Polytechnic, an emerging paradigm for higher education which recognizes that global challenges and opportunities are so great they cannot be adequately addressed by even the most talented person working alone. Rensselaer serves as a crossroads for collaboration — working with partners across disciplines, sectors, and geographic regions — to address complex global challenges, using the most advanced tools and technologies, many of which are developed at Rensselaer. Research at Rensselaer addresses some of the world’s most pressing technological challenges — from energy security and sustainable development to biotechnology and human health. The New Polytechnic is transformative in the global impact of research, in its innovative pedagogy, and in the lives of students at Rensselaer.