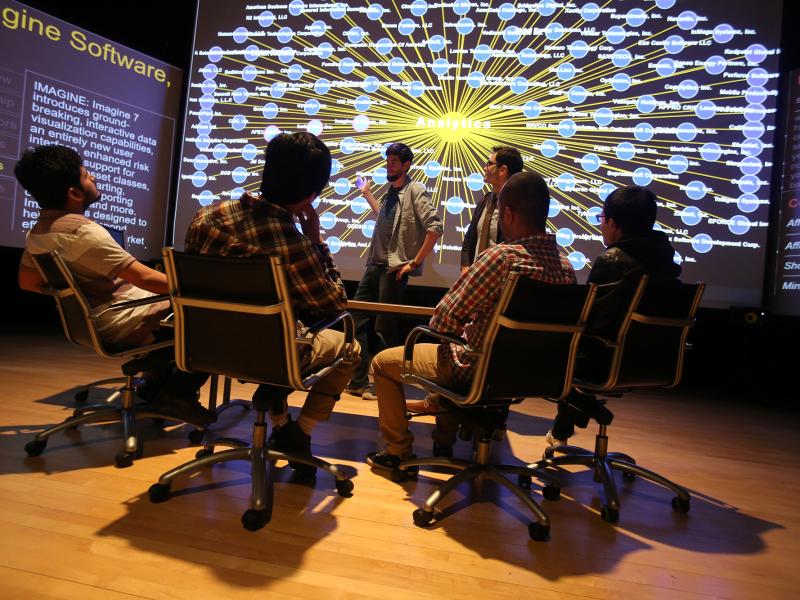 Research in the Cognitive and Immersive Systems Lab at Rensselaer is at the frontier of research and development in immersive cognitive systems.

Rensselaer Polytechnic Institute celebrated Cindi and Curtis R. Priem ’82 during the West Coast Scholarship Gala for their transformative campaign gift that enhances faculty and research excellence through the establishment of an endowed Curtis R. Priem ’82 Cognitive and Immersive Systems Constellation. Priem, a longtime supporter of Rensselaer, is an inventor who has authored almost 200 patents and is co-founder of NVIDIA Corporation, a manufacturer of graphics and multimedia integrated circuits. The Constellation will support a cohort of multidisciplinary faculty and students forging new frontiers in research, further advancing the world’s understanding of cognitive computing.

“It’s an exciting time to be ambassadors for Rensselaer,” said Curtis Priem, ’82. “We are thrilled to be a part of the Rensselaer vision for the future. It’s important for us to have the opportunity to support the enhancement of faculty and research as one of the three key pillars of the campaign.”

“By endowing this constellation, Cindi and Curtis have created support for faculty at all levels, research opportunities for undergraduates, and support for graduate students. They have ensured that Rensselaer is poised for greatness in an emerging critical field,” said Rensselaer President Shirley Ann Jackson.

The Gala — held in Half Moon Bay, California, in June — commemorated the West Coast launch of Rensselaer’s capital campaign, Transformative: Campaign for Global Change. Publicly launched in October 2017, the campaign seeks to raise $1 billion and has raised more than $425 million thus far. The campaign’s pillars include improving student access and enhancing the student experience, empowering world-class teaching and world-changing research, and building the third-century campus. Support of this initiative will allow Rensselaer to secure the future for its third century and empower students to change the world for generations to come.

The event also marked the official launch of the Rensselaer Silicon Valley Network Executive Council which is focused on establishing regional networks to strengthen the bonds between alumni and alumnae, corporate partners, and students. More than 150 alumni, alumnae, corporate partners, leaders, and friends enjoyed the festivities and participated in immersive activities throughout the day including presentations, research demonstrations, and panel discussions.

“It is fitting that we gathered on the West Coast,” said President Jackson. “The association between California and Rensselaer has become increasingly noteworthy. The devotion of our Rensselaer West Coast community will support a transcontinental model for enhancing accepted and incoming student programs, engaging parents, alumni, and alumnae — many of whom are key leaders in their respective industries — to network on behalf of the Institute and its talented students, and further strengthening corporate alliances across the region.”