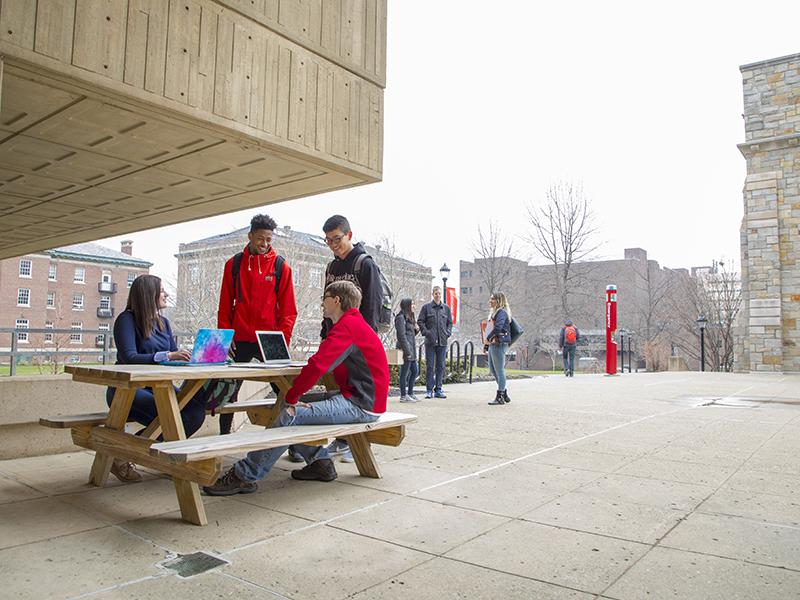 Nearly 1,800 new students will begin their academic careers at Rensselaer

This weekend, 1,796 new students will make their way to Rensselaer Polytechnic Institute to start the next stage of their academic careers. The first-year students hail from 45 states, the District of Columbia, and Puerto Rico. As a reflection of the global reach of Rensselaer, almost 300 students come from countries around the world. The new students will move in on Saturday, August 25. Classes begin on Thursday, Aug. 30.

The high-achieving group includes 95 valedictorians or salutatorians of their high school graduating class, and 161 students with a score of 800 on the SAT critical reading or math exams. The SAT class average was 1409 based on the 1600 scale.

The Class of 2022 includes students who have been nominated for the Rensselaer Medal, a scholarship awarded to the top math and science students at high schools across the country. This year, 233 Medal winners have joined Rensselaer. The Medal was first presented in 1916 with two purposes: to recognize the superlative academic achievement of young men and women, and to motivate students toward careers in science, engineering, and technology.

The Class of 2022 is health-and-fitness conscious—1,135 of the incoming students participated in sporting activities and 42 were captains of athletic teams in high school. In addition, the class includes a USAPL weightlifting state champion and record-holder and a national gold medalist in Taekwondo. There is also a runner who ran one million meters (621.37 miles) this summer

With the Rensselaer motto of “why not change the world,” it’s no surprise that inventors and creators abound in this class. One student created a free summer computer programming class for children from low-income families; another invented a heart-rate monitor sports bra and a GPS-enabled shin guard. One student has been awarded a patent for a new way of selling ice cream that eliminates the ice cream scoop, while another student has created an app called Babble that provides space for open and anonymous discussions.

Given the Rensselaer focus on preparing well-rounded students, it’s no surprise that the group includes students who have a creative side. Many of the new students have performed in venues around the country and even around the world. One is a classical pianist who has performed at Carnegie Hall, another authored two books on math and science, and one student starred in an instant noodle commercial at the age of 3!

The class includes students who have readily given their time to help others. Students who have volunteered their time to help in schools, to help with environmental causes, and to help within their religious communities are part of the Class of 2022. Among them, one classmate spends her time training dogs to help people with PTSD, while another serves his community as a volunteer fireman.

Members of the Class of 2022 participated in Student Orientation during July and early August. From Aug. 26 to Aug. 29, Rensselaer will officially welcome the new first-year students and introduce them to the local community through a weeklong series of events known as “Navigating Rensselaer & Beyond” (NRB). Created under The Rensselaer Plan in 2001, NRB is designed to familiarize first-year students with the Rensselaer campus, and the city of Troy and surrounding areas.

While at Rensselaer, the new students will experience facets of The New Polytechnic, a new paradigm for learning and research. Rensselaer leads by using advanced technologies to unite a multiplicity of disciplines and perspectives, in order to take on large, multifaceted challenges to become transformative in three fundamental ways: in the global impact of our research, in our innovative pedagogy, and in the lives of our students.