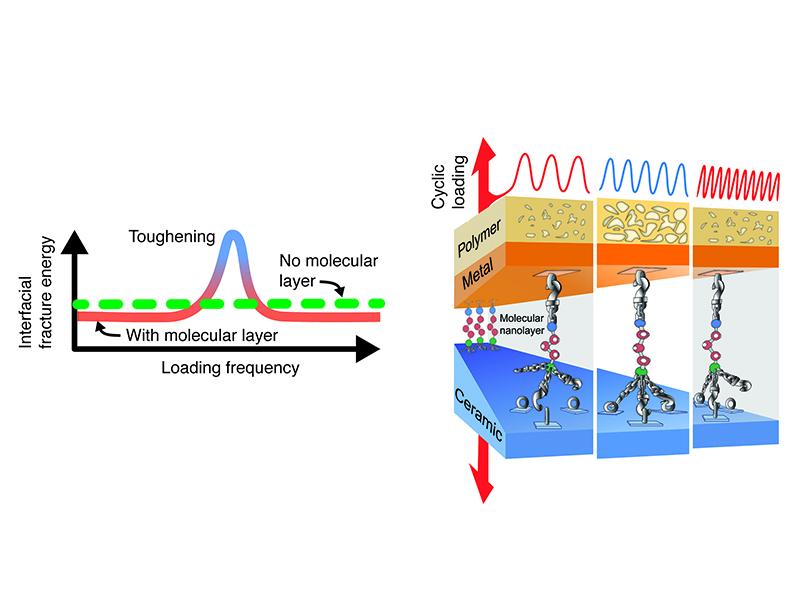 Illustrations of frequency-dependent toughening in a polymer-metal-nanoglue-ceramic composite.

Space travel is heating up—and so are rocket fuel emissions. These companies are developing cleaner alternatives to protect earth first
Why Do Fossil Fuels Have So Much Carbon Stored in Them?
Rensselaer Creates Course Program Focused on Training in Micro and Nanofabrication Cleanroom Technology
Rensselaer Researcher Awarded NASA Space Biology Grant for Work Focused on Spaceflight Stressors
Moveable Robotic Platform Could Be the Future of Retail
December 7, 2018

In a discovery that could pave the way for new materials and applications, materials scientists at Rensselaer Polytechnic Institute have found that oscillating loads at certain frequencies can lead to several-fold increases in the strength of composites with an interface that is modified by a molecular layer of “nanoglue.”

A newly published article in Nature Communications reports the unexpected discovery of the effects of loading frequency on the fracture energy of a multilayer composite involving a “nanoglue,” the use of which was also pioneered at Rensselaer.

“Unearthing, understanding, and manipulating nanoscale phenomena at interfaces during dynamic stimuli is a key to designing new materials with novel responses for applications,” said Ganpati Ramanath, the John Tod Horton Professor of Materials Science and Engineering at Rensselaer and the lead author on the study. “Our work demonstrates that introducing a nanoglue layer at an interface of a layered composite can lead to large mechanical toughening at certain loading frequencies.”

Ramanath and his team of collaborators found that, at certain loading frequencies, the energy required to fracture a nanoglue-modified polymer-metal-ceramic composite tripled, and exceeded the static loading fracture energy. This behavior is unexpected and significant because fracture energy is typically lower during cyclic loading than it is during static loading. Such frequency-dependent toughening was observed only when a nanoglue layer was used to bond the metal and the ceramic.

The results also show that while the nanolayer is necessary for toughening to occur, the frequency range and the extent of toughening are primarily determined by the mechanical properties of the polymer in the composite. Specifically, the nanoglue facilitates load transfer across the metal-ceramic interface and dissipates energy in the polymer through plastic deformation, leading to an increase in fracture energy.

“Our discovery opens up an entirely new set of possibilities to design composites with novel responses using different combinations of polymers and interfacial nanolayers. For example, we could realize a completely new class of smart composites that can significantly toughen, or perhaps even self-destruct, at certain frequencies,” Ramanath said.

“Our findings of beneficiary couplings between the nanoglue effect and the properties of a constituent in a composite during cyclic loading opens a new paradigm in reliability engineering,” said co-author Michael Lane, the Billie Sue Hurst Professor of Chemistry at Emory & Henry College. “Manipulating the coupling can actually make composites more robust under just the loading conditions we have traditionally tried to avoid, and hence, can vastly expand the scope and improve the performance of composites in applications.”

This groundbreaking work is the product of a collaboration between researchers from multiple disciplines who are based in New York, Virginia, and Grenoble, France. As such, it is illustrative of the international and interdisciplinary nature of The New Polytechnic, the guiding model for research and education at Rensselaer.