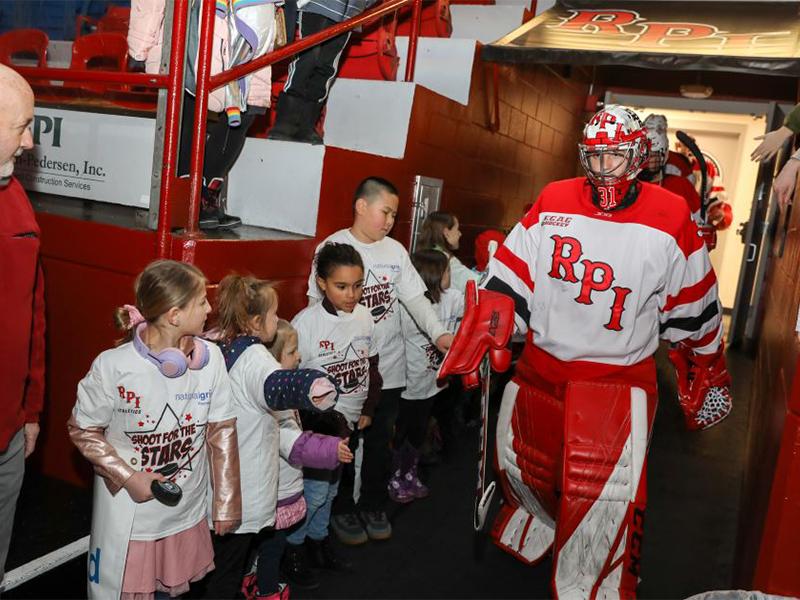 Students from Troy meeting Rensselaer hockey players during a "Shoot for the Stars" event.

A unique partnership between Rensselaer Polytechnic Institute Athletics and the National Grid Foundation is encouraging local students to aim high with their education. On Friday, February 15, the partners will honor local children from the Troy City School District at an annual “Shoot for the Stars” event. Top performing students will receive special “Rising Star” trophies.

The “Shoot for the Stars” program is designed to motivate students to improve their academic performance, attendance, and school behavior. Throughout the season, local elementary and middle school students and a guest are invited to attend select Rensselaer Division I men’s and women’s ice hockey games and a pre-game reception. You can watch a video about the program here.

During the men’s Division I hockey game on Friday, February 15, the highest performing students from the participating schools will be honored in a special pre-game on ice ceremony. This will be the final “Shoot for the Stars” event of the season.

“The National Grid Foundation is pleased to again team up with Rensselaer on the ‘Shoot for the Stars’ program,” White said. “The addition of our ‘Rising Stars’ program component, which recognizes the most exceptional young students in each grade, will stimulate even greater performance in the classroom. This addition, along with inspiration from Rensselaer’s exceptional scholar-athletes, and the reward of a Rensselaer hockey game, will benefit the students of the Greater Troy area immensely.”

The partnership between Rensselaer and National Grid Foundation to implement the “Shoot for the Stars” program began in January 2014 with children from the Troy City School District. Since the program’s inception, thousands of children have participated. The Foundation is supporting the program this year with a $15,000 investment.

Meghan Ogden, whose nine-year-old son Jordan has participated in the program for multiple years, said, “He actually wants to come and play hockey for RPI when he gets older, and that's a goal he has set for himself. He knows that, to be a player at RPI, he also has to be a good student.”

As role models to the young people in the community, Rensselaer scholar-athletes act as mentors to the program participants. This engagement goes beyond sports and fosters the interest of young students in science, technology, engineering and math fields.

“I really appreciate that they do this program for us. We love it,” said Christie Fronhofer, whose children have participated in the program for several years. “I think it's great. They do a whole program for the kids, and they're always so gracious.”

Other National Grid Foundation programs include the successful “Hoops for the Stars” program at Siena College, Syracuse University, the University at Buffalo, Providence College and the University of Rhode Island that provide tickets to men’s and women’s basketball games to middle school students for their academic achievements.