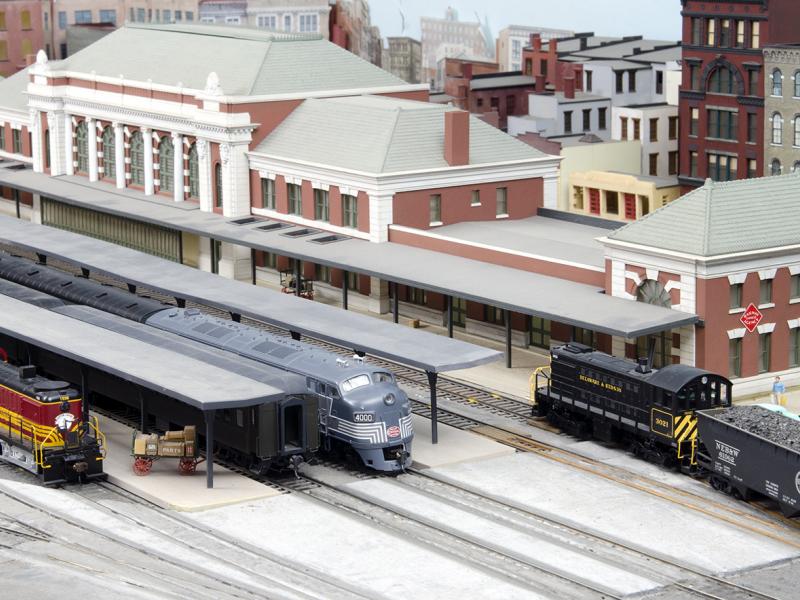 TROY, N.Y. – The New England, Berkshire & Western Railroad (NEB&W), a renowned model railroad layout that has been meticulously crafted and maintained by the Rensselaer Model Railroad Society over several decades, will soon be moved to a location that will allow the public better access to its miniature re-creations of communities from Troy to the Canadian Border set in 1950.

Beginning in the fall semester, the Model Railroad Society is expected to be fully relocated to a new home in space leased by the Rensselaer Polytechnic Institute at 258 Hoosick Street in Troy.

“This move is uncovering a hidden gem and elevating it to a position of prominence in the community,” said Dalton Slegel, the president of the Model Railroad Society. “We are honoring the historical connections between Rensselaer alumni and railroading heritage, as well as the immense contributions of club members over many decades.”

When the Model Railroad Society got its start in 1947, it was initially housed in the Pittsburgh Building on the Rensselaer campus. In 1972, after multiple moves, it settled in the basement of Davison Hall, a first-year residence building. There, the NEB&W line grew both in size and reputation, filling the space and earning international acclaim within the model railroad community.

Over time, space restrictions, residence hall security, and other characteristics of the club’s location made access nearly impossible for non-members. This summer, Davison Hall will undergo necessary renovations, including removal of asbestos insulation and the removal and replacement of aging water and heating pipes located directly above and around the NEB&W layout.

Rather than risk damage to the railroad, Rensselaer developed a plan for its removal and relocation. In addition to being more publicly accessible, the new space on Hoosick Street will provide the club with additional space to expand the exhibit.

“This model railroad both preserves and is an important part of the history of Rensselaer and its connection to the community. Throughout this project planning process, it has been the Institute’s intention to protect the model railroad,” said Claude Rounds, the vice president for administration at Rensselaer. “I am pleased that we are moving forward to provide the railroad model with a new home where it can grow and be appreciated by more people. I am very grateful to the Model Railroad Society and its leadership, the Rensselaer Student Union, and the other organizations involved in this collaborative group effort.”

Rensselaer has chosen VMJR Companies, which specializes in collaborative construction services, to manage the Davison Hall renovation project, including the relocation of the NEB&W layout. VMJR has retained the services of Adirondack Studios and Clarke Dunham of Dunham Studios, which specializes in model railroads, to develop and execute a plan to safely remove the railroad from the basement of Davison Hall, provide secure temporary storage, and reassemble it at the new location.

Through this transition and beyond it, the club will continue to receive support from the Rensselaer Student Union.

“The Union is thrilled to partner with the students of the Model Railroad Society, campus colleagues, alumni, and community members to carry on this great legacy,” said Charlie Potts, the director of the Union.

Many details relating to how the new venue will function, including when members of the public will be able to visit, are still being worked out and will be announced later in the year.