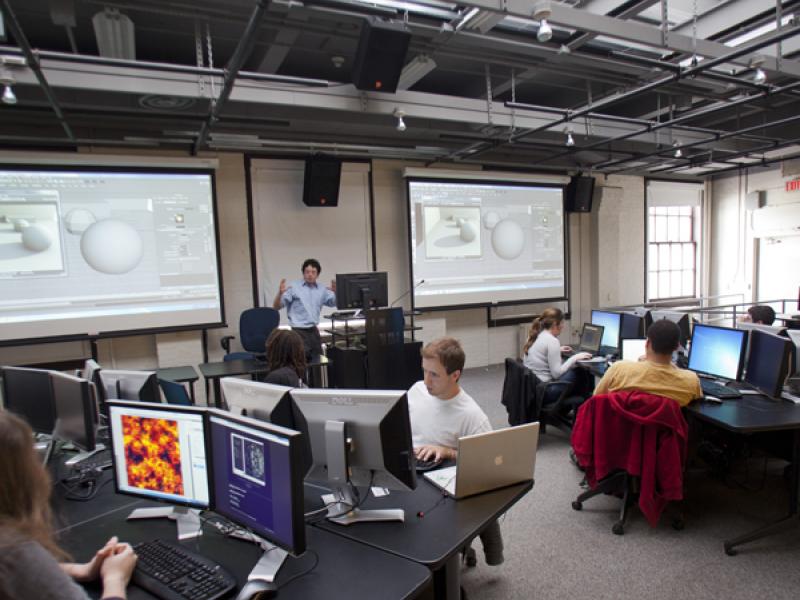 Rensselaer Polytechnic Institute is celebrating its first semester as part of a New York State Center of Excellence in Digital Game Development. Together with Rochester Institute of Technology and New York University, the center has received nearly $900,000 in new grant funding from New York to support and grow the state’s digital gaming sector.

The initiative to strengthen and increase opportunities for game developers began in 2016 when New York state, through Empire State Development’s Division of Science, Technology and Innovation (NYSTAR), established three university-based digital gaming hubs. New York renewed and increased this investment by making Rensselaer, RIT, and NYU part of the NYSTAR Centers of Excellence program. The increased funding will advance efforts to grow the size and prominence of the New York state games industry. Since the digital gaming hubs were established, they have created and retained over 120 jobs, assisted in the development of over 110 games, and have supported the licensing and publishing of 14 games.

“We are proud of the success we’ve had as part of the Digital Gaming Hub program over the past three years and look forward to expanding our work as part of the new Center of Excellence in Digital Game Development,” said Benjamin Chang, professor and director of the Games and Simulation Arts and Sciences (GSAS) program at Rensselaer, one of the top 10 game design programs in the nation, according to Animation Career Review. “It is an exciting time for game development in New York and we thank Governor Cuomo, the New York State Legislature, and Empire State Development and its Division of Science, Technology and Innovation for the continued support.”

“As one of the top game design schools in the country, Rensselaer Polytechnic Institute has an established track record of creating the regional talent that has helped to grow this industry, which now encompasses 14 video game studios employing more than 350 people,” said Senator Neil D. Breslin. “The Senate recognizes the unique ecosystem we have in the Capital Region, and along with Governor Cuomo, is proud to support the investment in the new Center of Excellence.”

The Tech Valley Digital Gaming Hub at Rensselaer specifically focuses on the digital gaming ecosystem in Tech Valley and the surrounding areas of the Capital Region. Led by the GSAS program in the School of Humanities, Arts, and Social Sciences at Rensselaer, the hub facilitates communication and collaboration between academic researchers, industry leaders, business incubators, and community partners.

Since its creation in 2016, the hub has invested in educating the public about game development in New York through trade shows and industry events. It has also focused on creating and maintaining community partnerships with organizations such as Tech Valley Game Space, Tech Valley Center of Gravity, Games in Education, and the Upstate Alliance for the Creative Economy.

“The emerging Capital Region video game cluster concentrated in Troy is due in no small part to the leadership of Rensselaer Polytechnic Institute,” said Assemblymember John T. McDonald III. “Thanks to the support of Governor Cuomo and the Assembly, the new Center of Excellence will equip our region with the resources necessary to continue growing this important industry and positioning New York as a global leader in video game development.”

Rensselaer students, alumni, and alumnae have made numerous contributions to this gaming cluster. IO Interloper, a “corporate espionage hacking game” developed by a group of recent graduates of the GSAS program, was a finalist for “Best Student Game” at the Independent Games Festival and the E3 College Games Competition. Together, this group has founded an independent Troy-based game design studio named DANG!

Rensselaer and the Center of Excellence in Digital Game Development worked with the Center for Economic Growth to bring the HV Gamer Con to the Capital Region. The tournament, which took place this past weekend, was the first of its kind in upstate New York and drew teams across the state and beyond. On April 27, Rensselaer will host GameFest, an annual games festival that showcases student creativity and innovation in game design.