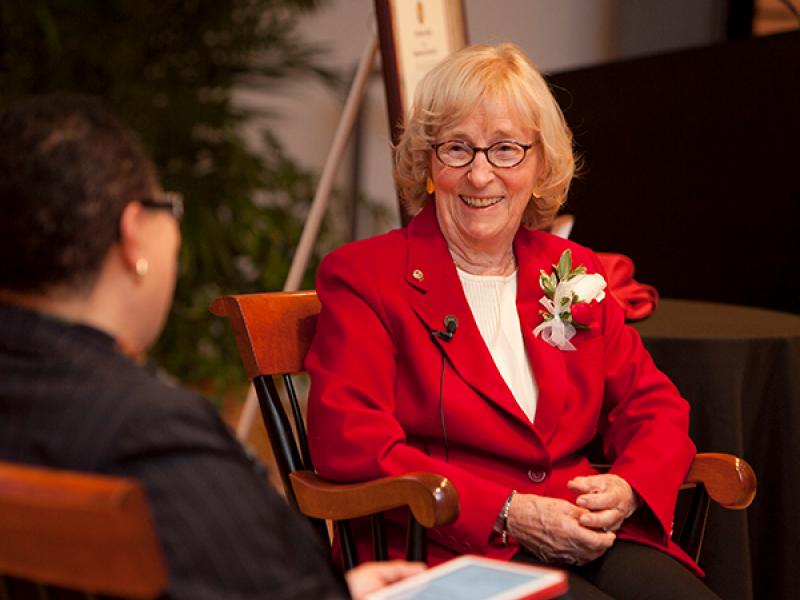 TROY, N.Y. — The Admissions Building at Rensselaer Polytechnic Institute will be named in honor of Dr. Nancy Deloye Fitzroy ’49 — the first woman to graduate from the Institute with a degree in chemical engineering — and her husband and fellow engineer, the late Roland V. Fitzroy Jr.

Dr. Fitzroy is an internationally recognized expert in the field of mechanical engineering. She worked at General Electric from 1950 until her retirement in 1987. During her 37-year career at General Electric, Dr. Fitzroy specialized in heat transfer and fluid flow research for application in nuclear reactor cores, gas turbines, space satellites, and other technologies. She has written more than a hundred technical papers and holds three patents.

In 1986, Dr. Fitzroy became the first woman in the United States to head a major professional engineering society, the American Society of Mechanical Engineers (ASME). In 1988, she was chosen as an honorary fellow of Britain’s Institution of Mechanical Engineers. She was elected to the National Academy of Engineering in 1995, and inducted into the Rensselaer Polytechnic Institute Alumni Hall of Fame in 1999. In 2008, ASME awarded her with honorary membership to recognize "her tireless efforts and lasting influence as an advocate of the mechanical engineering profession." She was awarded the prestigious Davies Medal for Engineering Achievement from the School of Engineering at Rensselaer in 2014.

“Dr. Nancy Fitzroy is a world-class engineer, a pioneer, and a remarkable leader. Her technical contributions to the fields of heat transfer and fluid flow have been fundamental to a range of technologies, from satellites, to toasters, to nuclear reactor cores,” President Jackson said. “Her leadership in engineering professional societies and commitment to inspiring future generations has helped strengthen engineering in the United States and around the world. At Rensselaer we ask, ‘Why not change the world?’ Dr. Fitzroy has done just that.”