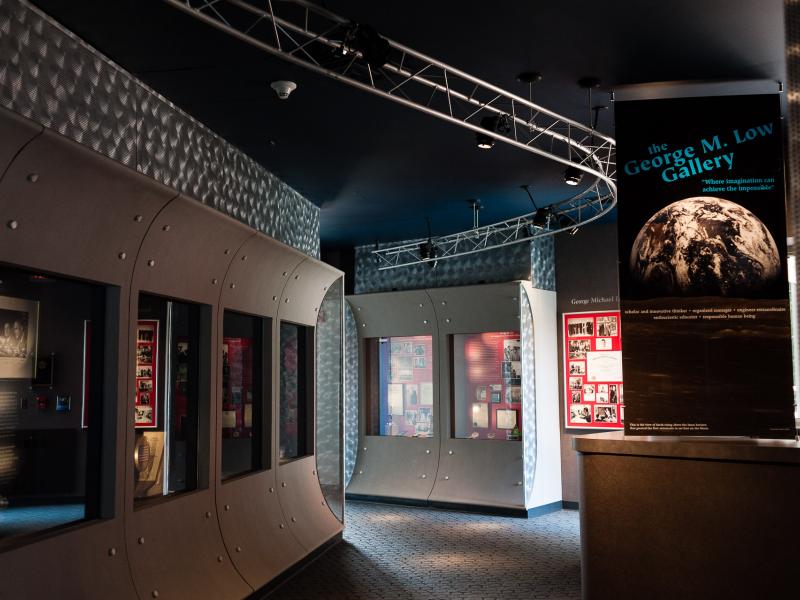 As the 50th anniversary of the Apollo 11 moon landing approaches, Rensselaer Polytechnic Institute invites the public to visit the George M. Low Gallery to celebrate and learn more about one of the key figures responsible for this historic accomplishment.

Located on the fourth floor of the George M. Low Center for Industrial Innovation on the Rensselaer campus, the gallery is a permanent exhibit of NASA memorabilia and other materials that honor the life and accomplishments of former Rensselaer President George M. Low ’48. It is open daily and there is no charge for admission.

“By using engineering and ingenuity to break down barriers for humans on Earth and in space, George Low personified the spirit of The New Polytechnic” said Rensselaer President Shirley Ann Jackson. “The Low Gallery is a special part of our campus that provides a tangible sense of the heights that can be reached with a Rensselaer education. Anyone with an interest in space exploration or a desire to be inspired should be sure to visit.”

To learn more about the Low Gallery, watch this video:

Low received his bachelor’s in aeronautical engineering from Rensselaer in 1948 and his master’s degree in 1950. He then joined the National Advisory Committee for Aeronautics, a precursor to NASA. He ultimately rose to the position of Deputy Administrator of NASA. Prior to that appointment, Low held a number of positions within the organization. He is particularly credited with leading the successful redesign of the Apollo spacecraft following Apollo 1’s deadly fire in 1967. Five manned space flights were flown under his direction, including the Apollo 11 mission.

After retiring from NASA in 1976, Low returned to his alma mater and became the 14th president of Rensselaer. He remained in office until his death in 1984. He was 58 years old. Low was posthumously awarded the Presidential Medal of Freedom and the National Medal of Science. Both awards are now on display in the Low Gallery at Rensselaer.

Low’s papers are also housed in the Rensselaer Archives, where they can be accessed by qualified researchers.

“Having George Low’s papers and this museum of his accomplishments on campus to celebrate his being here, both as a student and as a leader, is incredible,” said Curt Breneman, dean of the Rensselaer School of Science.

The George M. Low Lounge was initially established through a gift from the Rensselaer Class of 1985. In 2002, it was converted into the Low Gallery with the addition of exhibits and artifacts donated by the Low family. In 2014, members of the Delta Phi fraternity, of which Low was a member, raised money to renovate and refurbish the space, ensuring a welcoming educational environment for all visitors.

Rensselaer alumnus and Delta Phi brother Roger Mike ’70, who was heavily involved in the renovation project, said that he was personally inspired by Low and touched by the family’s willingness to provide this memorabilia to the university.

“They wanted it on display for the world to see,” Mike said. “Well, it’s right here, World.”