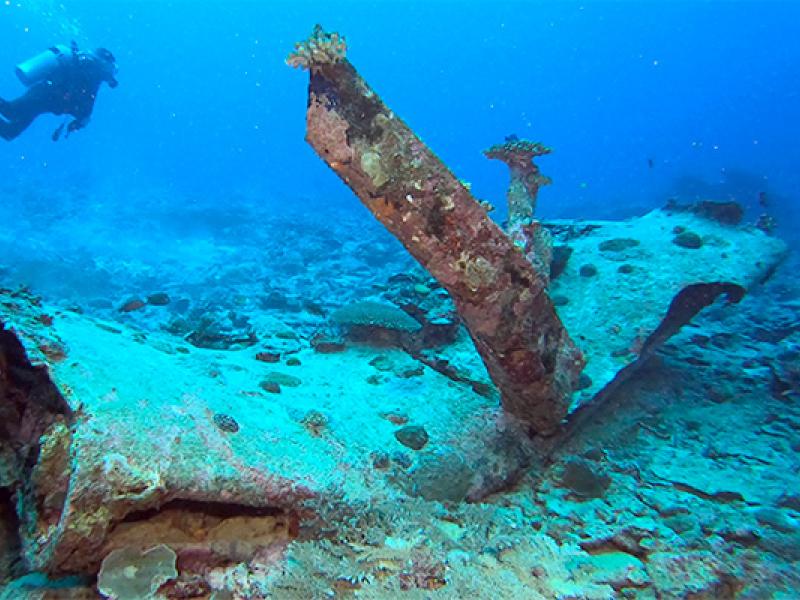 Rensselaer Polytechnic Institute is partnering with Pacific Wrecks to tell the story of MIA recovery efforts.

Medical Imaging Expert Ge Wang Honored by International Society for Optics and Photonics
Organic Materials in Martian Meteorite Formed by Interactions Between Water and Rock
Rensselaer Scholars To Build and Test Prototype To Monitor Water Quality for Nitrogen
Cryptocurrency is volatile, yes. But is it just a trend, or here to stay?
Rensselaer Student Awarded Computing Scholarship
July 25, 2019

TROY, N.Y. — Rensselaer Polytechnic Institute has formed a partnership with Pacific Wrecks, a nonprofit organization dedicated to locating Missing-In-Action (MIA) personnel, which will initially focus on documenting the group’s discoveries.

Pacific Wrecks recently identified the wrecked airplane of missing World War II pilot and Troy native John McGrath and will share findings from their expedition to the wreckage during an event to be held July 30 in West Hall Room 115 on the Rensselaer campus. The event will run from 3 to 6 p.m. with a presentation from 3 to 4 p.m., followed by an informal discussion of the project.

“To dive on a plane wreck, a place where somebody died, a place where somebody remains to be found, is an incredibly moving experience,” said Justin Taylan, founder of Pacific Wrecks and a Rensselaer Class of 2000 alumnus. “These are places where work must still be done. They are the last page in a book that has yet to be finished.”

At Rensselaer, the partnership is led by Igor Vamos, a professor of media arts, award-winning documentary film maker, and performance artist. Vamos was one of Taylan’s professors and the two have remained in contact since Taylan earned a bachelor’s degree in electronic media, arts, and communications in 2000.

“There are interesting stories to be told in Justin’s work, and it’s my honor to be a part of telling the complex stories of these recovery efforts,” Vamos said.

Among the stories is that of U.S. Marine 2nd Lt. John McGrath, who grew up in Troy and graduated from Catholic Central High School, which is now West Hall on the Rensselaer campus, in 1941. McGrath’s studies were interrupted by his military service. In July of 1945, after his plane failed to recover from a dive during a mission and was seen crashing into waters off Iriomote Jima, and he was officially listed as MIA.

In 1943, while home on military leave, McGrath was photographed on the steps of what is now West Hall with three other Catholic Central graduates who were enlisted in the military: Jack Marcil, Howard McAlonie, and Alfred Mahoney. Of the four, Marcil, then in the Coast Guard and now 95 years old, is the only one still alive.

Marcil has been invited to the July 30 event, which will fittingly be held in West Hall. During the event, Taylan will give a short presentation on the search and show documentary footage of the underwater wreck.

McGrath’s family will also be present. Also among the invitees is Michael McAlonie, the son of Navy sailor Howard McAlonie (Rensselaer Class of 1950), who died in 2014. The younger McAlonie was very involved in locating wreckage with Taylan.

During the expedition to the Japanese island, Taylan learned that, although the existence of the wrecked plane had been reported to the Department of Defense in the 1980s, it had not previously been connected with McGrath, who is still listed as MIA.

Taylan’s interest in World War II began with his grandfather, Carl R. Thien, a U.S. Army combat photographer in the Pacific. In 1993, Taylan traveled with Thien to the places where he had served and was awestruck by the experience.

At Rensselaer, Taylan turned his love for WWII history into the Pacific Wreck Database website, which he started as a repository of known wrecks for a senior project. The website quickly grew with the help of veterans, authors, and experts from around the world, and has become part of an internationally recognized nonprofit credited with the discovery of “new” wreck sites, the identification of other sites, the recovery of relics such as photographs and dog tags, and the reuniting of former comrades.

As the new partnership evolves, Taylan and Vamos said there is the potential to involve other Rensselaer faculty with expertise in key fields and technologies that are helping to fuel fast-paced growth in MIA recovery.