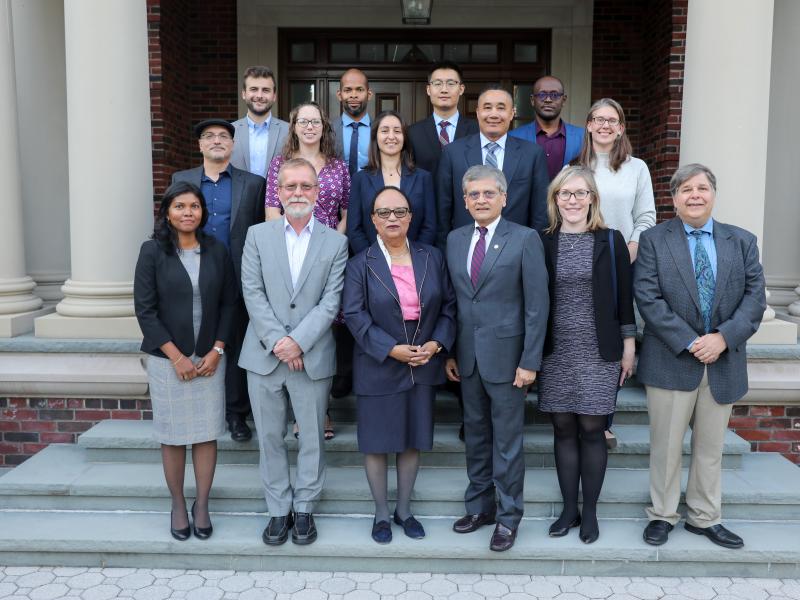 Rensselaer Polytechnic Institute is welcoming 15 new professors to the faculty for the 2019-2020 academic year.

At the event, President Jackson explained that Rensselaer operates within an intellectual construct called The New Polytechnic, which comes from the Greek for “skilled in many arts.” Accordingly, two key tenets offer the structural underpinning for decisions made at the university.

“First, we are collaborative and multidisciplinary, because the greatest opportunities and challenges cannot be addressed by even the most brilliant person working alone, nor by a single discipline, sector, nation, or generation. At Rensselaer, we unite a multiplicity of perspectives to do great work,” Jackson said. “The second factor that guides us is our focus on the most pressing global challenges surrounding our food, water, and energy supplies; our need for sustainable and resilient infrastructure, structures, and materials; human health and the mitigation of disease; national and global security; the allocation of valuable natural resources; and a changing climate.”

Faculty joining Rensselaer during this academic year are:

Elizabeth Blaber, assistant professor of biomedical engineering, who investigates the role of gravity in regulating basic stem cell function using integrative physiology and molecular genomics approaches. At NASA, she worked to identify biological factors involved in the loss of stem cell functions in microgravity. She garnered significant grant funding for her research as well as won several awards, including the NASA Early Career Public Achievement Medal and the Thora W. Halstead Young Investigator Award from the American Society for Gravitational and Space Research. Blaber received a bachelor of medical science (hons) in molecular biology and a Ph.D. in biochemistry and molecular genetics, from the University of New South Wales, Australia.

Tianyi Chen, assistant professor of electrical, computer, and systems engineering, joins Rensselaer as part of the Rensselaer-IBM Artificial Intelligence Research Collaboration. His background spans areas from machine learning and artificial intelligence to optimization, signal processing, and wireless networking, with applications to edge computing for IoT, cloud and data centers, and smart grids. Chen received a B.Sc. in communication science and engineering (with honors) from Fudan University in China and M.S. and Ph.D. degrees in electrical and computer engineering from the University of Minnesota.

Edwin Fohtung, associate professor of materials science and engineering, is an expert on the use of X-ray and neutron scattering methods to perform materials characterization at the molecular level aimed at understanding and quantifying structure-property relationships, as well as dynamics in advanced materials. His research focuses on developing and applying state-of-the-art Photon Science, such as coherent X-ray/optical scattering and imaging, and neutron techniques to probe emergent electronic and magnetic phases arising from competing/coupled charge-, spin-, orbital and lattice degrees of freedom in nanomaterials. Fohtung received a B.Sc. and M.Sc. in applied physics from the St. Petersburg State Polytechnic in Russia. In 2010, he earned a doctorate in physics and materials science from the Universitat Freiburg in Germany.

Fudong Han, Mukesh and Priti Chatter Career Development Assistant Professor, has performed exceptional work in the area of energy storage materials with applications to rechargeable batteries and fuel cells. He has published 55 peer-reviewed papers, in journals such as Nature Materials, Nature Energy, and Nanoletters, which are cited over 3,700 times with an H-index of 30 already. Han received B.S. and M.S. degrees in materials science and engineering from Shandong University and a Ph.D. in chemical engineering from the University of Maryland, College Park.

Derya Malak, assistant professor of electrical, computer, and systems engineering, addresses major challenges in wireless networks. She focuses on providing novel distributed caching and computation techniques (without onerous coordination across sources) for 5G networks by capturing the confluence of computing, communication, and storage. Malak received a B.S. in electrical and electronics engineering with a minor in physics from Middle East Technical University in Ankara, Turkey, and an M.S. in the same field from Koc University in Istanbul, Turkey. She received a Ph.D. in 2017 in electrical and computer engineering from the University of Texas at Austin.

Kristen Schell, assistant professor of industrial and systems engineering, concentrates on the interface of engineering, operations research, and economics, with focus on sustainability. Her work has concentrated on renewable energy penetration from the modeling, optimization, resiliency, and policy perspectives. Schell received a B.S. degree in chemical engineering from Carnegie Mellon University and an M.S.E. in geography and environmental engineering from Johns Hopkins University. In 2016, she received a dual Ph.D. degree in engineering and public policy from Carnegie Mellon University and the Faculdade de Engenharia da Universidade do Porto, in Portugal.

H. Keith Moo Young, vice provost and dean of undergraduate education, professor in civil and environmental engineering, is an expert in the area of solid and hazardous waste management, environmental containment, and remediation technologies. Moo-Young is a licensed Professional Engineer and is Board Certified in Environmental Engineering, which is the highest professional honor for a practicing environmental engineer. He was elected a fellow of National Academy of Inventors in 2017, of the American Association for the Advancement of Science in 2013, and of the American Society of Civil Engineers in 2012. Moo Young received a B.S. in civil engineering from Morgan State University in 1991, and M.S. and Ph.D. degrees from Rensselaer in 1992 and 1995, respectively.

Lydia Manikonda, assistant professor of management, focuses on the areas of artificial intelligence (primarily automated planning) and machine learning, toward providing solutions to problems in real-world scenarios such as marketing, public health, and personal goals. Specifically, she builds intelligent systems to perform offline decision-making by utilizing the online footprints of individuals on social media. Dr. Manikonda earned a Ph.D. in computer science from Arizona State University. She received a bachelor’s (with honors) and a master’s (with Thesis) degrees in computer science and engineering from the International Institute of Information Technology, Hyderabad (IIIT-H), India.

Gaetano Montelione, Constellation Professor in the Biocomputation and Bioinformatics Constellation, is an internationally recognized expert in structural genomics and protein NMR spectroscopy whose notable work includes elucidation of critical protein-protein interactions in cancer biology, and his key discoveries about the structure-function relationships of NS1 protein that form the basis for the use of live attenuated influenza vaccines in humans. For more than 16 years, he built and served as director of the NIH NIGMS Center for Structural Genomics at Rutgers. Montelione earned both bachelor’s and Ph.D. degrees in physical chemistry from Cornell University.

Trevor Rhone, assistant professor of physics, applied physics, and astronomy, concentrates on the interface of computational and experimental condensed matter physics. Rhone received his bachelor’s degree in physics from Macalester College. He earned a Ph.D. in physics from Columbia University

Ian Chadd, assistant professor of economics, specializes in the fields of microeconomic theory, decision theory, and experimental economics. He is currently working that examines the consistencies and inconsistencies displayed by a deterministic Network Choice model and a proposed stochastic Random Network Choice model. Chadd received a B.A. in economics and mathematics from Wittenberg University in Germany and an M.A. and Ph.D. in economics from the University of Maryland-College Park.

Matthew Goodheart, assistant professor of arts, is a composer, improviser, and sound artist who. His teaching experience includes contemporary improvisation, multidimensional audio systems, music perception and cognition, and advanced chromatic harmony and post-tonal theory. Goodheart received a Ph.D. in music from the University of California at Berkeley.

Tomek Strzalkowski, professor of cognitive science, is an expert on artificial intelligence, computational linguistics and sociolinguistics, computational social science, and information retrieval. He is the author of five books and numerous book chapters, journal articles and technical papers. Strzalkowski received an M.Sc. in computer science from Warsaw University and a Ph.D. in computer science from Simon Fraser University.