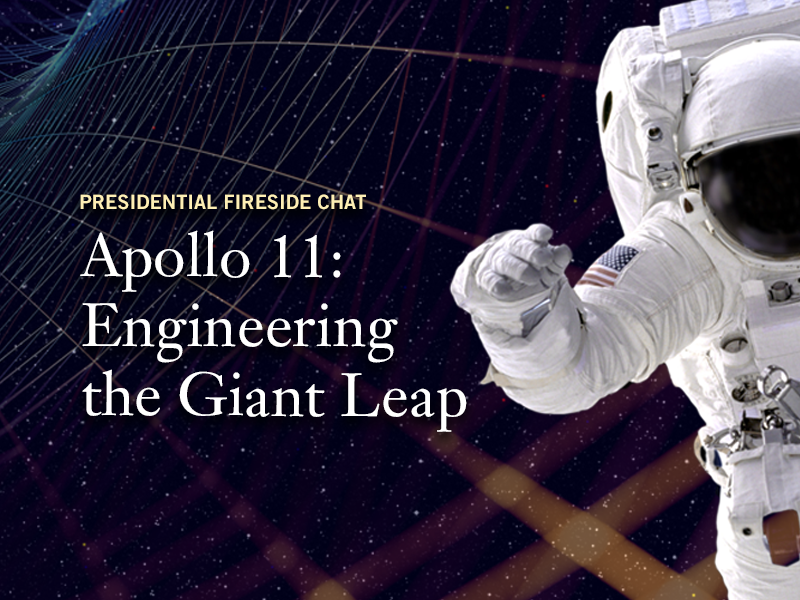 As part of the upcoming Reunion & Homecoming festivities at Rensselaer Polytechnic Institute, President Shirley Ann Jackson will lead a panel discussion celebrating the 50th anniversary of the historic Apollo 11 moon landing and contemplating the future of space exploration.

During his time at NASA, Major General Bolden, who received an honorary degree from Rensselaer in 2008, oversaw the safe transition from 30 years of space shuttle missions to a new era of exploration focused on full utilization of the International Space Station and space and aeronautics technology development.

In addition to being the managing director of both the Global Cardiovascular Center and the NIH Center for Accelerated Innovations at the Cleveland Clinic, Low is the son of Rensselaer alumnus George M. Low ’48, who played a pivotal role in putting men on the moon a half century ago. He assumed management of the Apollo program after the Apollo 1 disaster and shepherded it through recovery to triumph on July 20, 1969. The elder Low returned to Rensselaer to become its 14th president, a position he held from 1976 until his death in 1984.

“Decades of hindsight have helped the world to see that a great deal of the credit for one of our most awe-inspiring accomplishments as a nation falls to George Low,” Jackson said. “This discussion will provide all of us with an opportunity to revisit the marvelous history of Rensselaer leadership in space exploration and examine how we continue to be bold and innovative in addressing challenges both on Earth and in the cosmos.”

Through the decades, the legacy of the connections that took George Low from Rensselaer to NASA and back has broadened and deepened into generations of ongoing contributions to space exploration by faculty, students, and alumni.

Members of the media interested in attending or viewing a livestream of the event should contact Rensselaer media relations in advance.