Two Decades of Transformative Leadership at Rensselaer Celebrated at Tribute 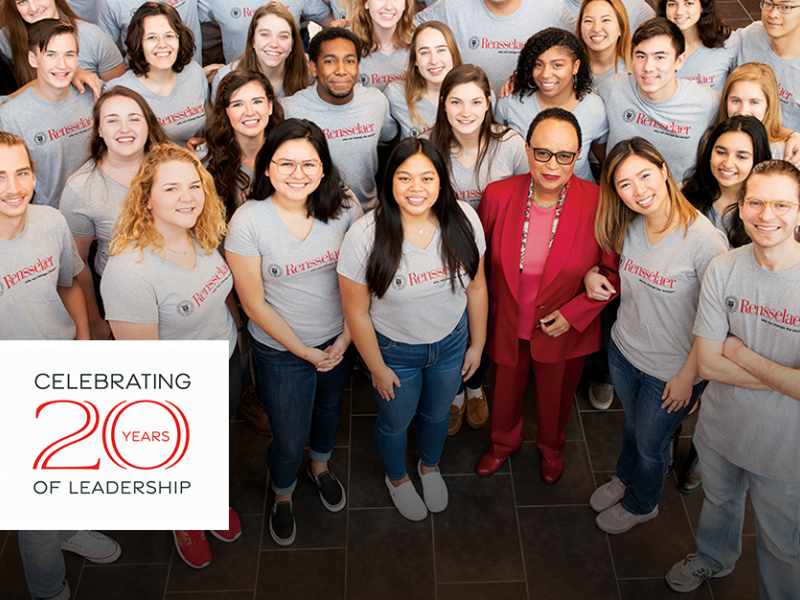 Two Decades of Transformative Leadership at Rensselaer Celebrated at Tribute

“Tonight, we are honoring a pioneer, an entrepreneur, and a sensitive visionary,” said Arthur F. Golden ’66, the chair of the board of trustees of Rensselaer Polytechnic Institute, on Thursday night as he welcomed the audience to a special tribute event celebrating 20 years of transformative leadership by President Shirley Ann Jackson.

While the median tenure of college presidents has declined to just five years nationwide, Rensselaer has benefited from two decades of steady leadership. Since President Jackson became the 18th president in 1999, Rensselaer has been transformed into a world-class university with global reach and global impact.

A number of special guests, including business leaders, trustees, students, staff, and family members, were on hand in the Curtis R. Priem Experimental Media and Performing Arts Center to celebrate this milestone by sharing their experiences and observations of President Jackson’s time at Rensselaer. There was also special musical performance by the Rensselaer Chamber Ensemble led by Mary Simoni, dean of the School of Humanities, Arts, and Social Sciences.

CDPHP President and CEO Dr. John Bennett ’74 served as the master of ceremonies. “Over the years, I have had the incredible opportunity to watch the transformation of this community, and the vision of Dr. Jackson, which has literally put the Capital Region on a national stage for innovation in higher education,” he said.

Many of the remarks centered on the four pillars President Jackson identified in the Rensselaer 2024 Plan, which guides the transformative work of the university: people, programs, platforms, and partnerships.

Vice Chair of the Board of Trustees Wanda Denson-Low ’78, a former senior vice president for The Boeing Company, discussed value of the university’s comprehensive approach to the student experience, known as CLASS — Clustered Learning, Advocacy, and Student Success.

“Dr. Jackson’s vision for CLASS enables RPI students to be a part of a strong community of learners and helps our students develop the intellectual agility, multicultural sophistication, and global awareness that will enable them to propel RPI into the next millennium and beyond,” she said.

IBM Executive Vice President Dr. John Kelly ’78 and Ralph Izzo, the Chairman of the Board, President and CEO, of Public Service Enterprise Group Incorporated, spoke about the important partnerships that Dr. Jackson has forged inside and outside the university.

Dr. Kelly said that, by working together, IBM and Rensselaer “woke up the world to artificial intelligence.” With regard to President Jackson’s work in the academic, government, corporate, and nonprofit worlds, Izzo said that she “has earned a reputation as a transformative figure at every stop along the way.”

Curtis Priem ‘82, the co-founder and former chief technical officer of Nvidia Corporation and secretary of the Rensselaer Board of Trustees, noted that the creation of the facility that bears his name, and its reputation as “the most technically advanced performing arts center in the world,” would not be possible “without the vision and hard work of Dr. Shirley Ann Jackson.”

Thomas Capek ’86, the senior vice president and chief engineer at Corning, presented President Jackson with a special gift in recognition of her two decades of leadership and service: a sculpture made of Steuben glass.

But perhaps the greatest gift of the evening were the words from President Jackson’s family — her husband, Morris Washington, and her son, Alan Washington, the head of operations and real estate at Success Academy Charter Schools.

“You have given me credit for providing the wind beneath your wings,” the elder Washington told his accomplished wife. “But I honestly do not believe that I can generate that much wind to allow you to soar to such great heights and achieve as much as you have.”

Meanwhile, President Jackson’s son credited her with being “the ultimate role model, not just for women in science but for woman in all fields and particularly for mothers of color working to succeed in extremely demanding roles in environments that are highly underrepresented all while trying to be a present mother.”

The evening concluded with words of appreciation from the guest of honor, President Jackson.

“It has been a privilege and an honor to serve as President of Rensselaer Polytechnic Institute for the past 20 years,” she said. “I thank you all, and I anticipate great things to come.”