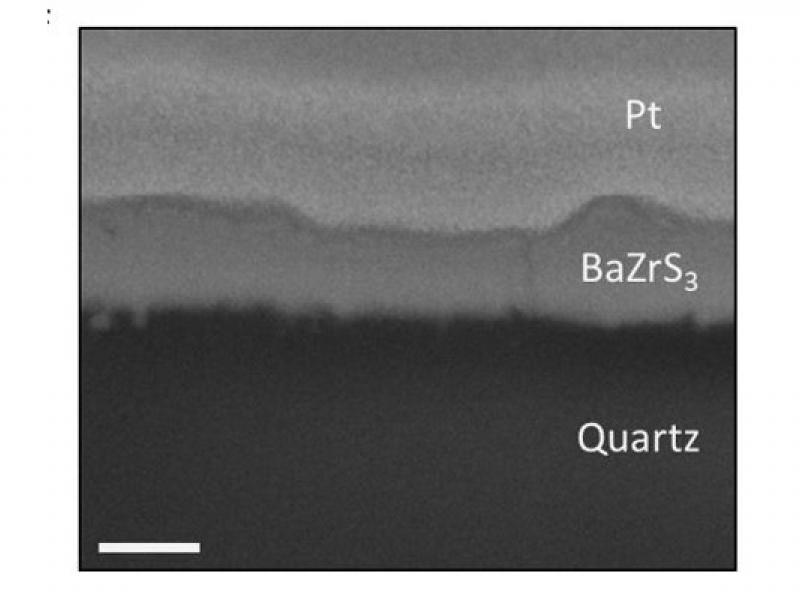 TROY, N.Y. — A widespread transition to solar energy will depend heavily on reliable, safe, and affordable technology like batteries for energy storage and solar cells for energy conversion. At Rensselaer Polytechnic Institute, researchers are focused heavily on both parts of that equation.

In research published today in Advanced Functional Materials, a team of engineers, material scientists, and physicists demonstrated how a new material — a lead-free chalcogenide perovskite — that hadn’t previously been considered for use in solar cells could provide a safer and more effective option than others that are commonly considered.

Organic-inorganic halide perovskites, a type of crystalline mineral, have shown promise as a key component in solar cells, but they have also posed large challenges. Their unique properties are very effective in converting energy from the sun into power and they are less expensive than silicon, which has traditionally been used in this capacity. However, they are unstable when they are exposed to moisture and sunlight, decrease in efficiency as they degrade, and they break down into lead and lead iodide — both of which are hazardous substances.

“These types of materials give you very good performance on day one, but inside three or four days, maximum a week, you find that their performance drops precipitously,” said Nikhil Koratkar, an endowed professor of mechanical, aerospace, and nuclear engineering at Rensselaer, and the corresponding author on this paper. “Besides, these materials are not environmentally friendly since they contain lead.”

To overcome that challenge, Koratkar and a team of researchers, which included Tushar Gupta, a doctoral student in mechanical engineering, demonstrated how a thin film of a lead-free chalcogenide perovskite, specifically barium zirconium sulfide (BaZrS3), could potentially replace lead-containing perovskites for a much safer, and more stable application.

In order to test this compound’s ability to convert light into electrical current, the team used it to build a light sensor. The researchers’ work in the lab revealed that BaZrS3 is intrinsically more stable and water-resistant. They were able to demonstrate through theoretical calculations and computational modeling that BaZrS3 is highly resistant to reacting or breaking down when exposed to moisture or intense sunlight. This was also experimentally validated through detailed device-aging studies that were conducted over a period of four weeks. On top of all of that, Koratkar said, manufacturing this compound is actually less expensive than high-quality silicon.

“The National Academy of Engineering has defined 14 grand challenges; one of those is to make harvesting energy from the sun cheaper and more widespread,” Koratkar said. “That’s the motivation of this work, to come up with new materials that could rival the efficiency of silicon, but bring down the cost of manufacturing solar cells, and that is the key to achieving this goal.”

Koratkar has secured funding from the National Science Foundation (NSF) to further develop and optimize these materials and deploy them in solar cell devices.