Inspired by the Past, Rensselaer Artist Develops Innovative Screenprinting Techniques 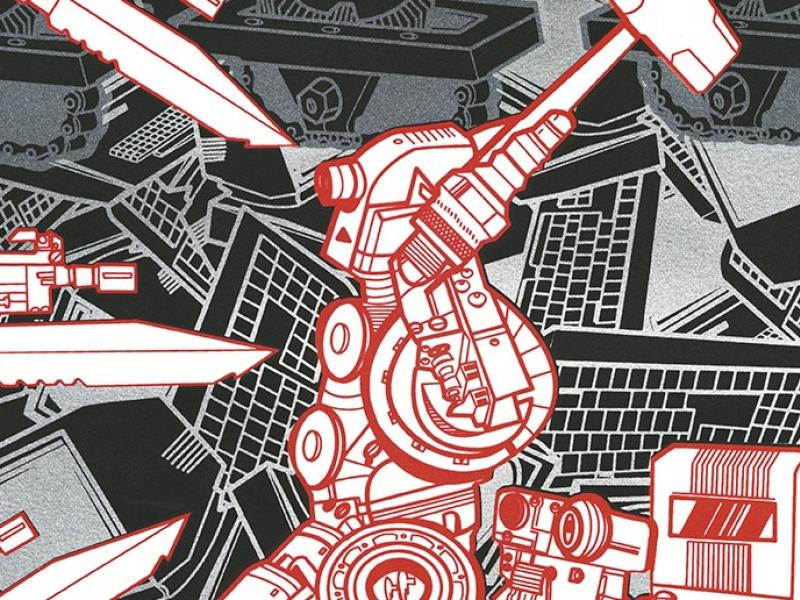 Inspired by the Past, Rensselaer Artist Develops Innovative Screenprinting Techniques

In the cold winter months of early 2019, Nathan Meltz found himself deep in a creative block. An established screenprinting artist, having exhibited in galleries around the world, Meltz is known for his use of mechanical imagery as visual metaphors for various types of destructive technologies, from war machines to fossil fuel extraction devices. But he was struggling to find inspiration.

Then, he was introduced to the expressionist work of an early 20th-century German artist named Käthe Kollwitz. Her empathetic depictions of mothers and the working-class poor in the two World Wars struck something in Meltz, a senior lecturer in the Department of Arts in the School of Humanities, Arts, and Social Sciences (HASS) at Rensselaer Polytechnic Institute.

“I was particularly drawn to Kollwitz’s print edition Seed Corn Must Not Be Ground from 1942, depicting a female figure shielding children from conflict,” Meltz said. “I began brainstorming how I might adopt parts of her theme into my own visual vocabulary, transforming Kollwitz’s protector into a sledge-wielding automaton defending robot children from assault rifles and bayonets.”

The imagery translated into a four-color screenprint edition, and the first iteration of what would become a research project detailed in a peer-reviewed article, “Evolutionary Robotics: Automatons Across Graphic Media,” recently published in The California Printmaker.

In his artistic quest to translate his vision, Meltz spent time in a prestigious residency at the Alfred Institute for Electronic Arts, in addition to the HASS Digital Fabrication Laboratory at Rensselaer, using numerous techniques including large-format digital printing, laser engraving, relief printmaking, and sugar-lift and laser-etched intaglio techniques. But it was his innovative use of 21st-century technology with 15th-century printing tools that pushed the boundaries of screenprinting.

“The world of graphic art has gone from a line engraved in a block of wood, to a photographic halftone, to the digital pixel,” Meltz said. “I took traditional 15th-century intaglio techniques, and smashed them together with 21st-century digital and laser technologies, and they made a new, third thing. What this new, third thing is, I’m still trying to wrap my head around, but it’s not boring. It’s art.”

Looking forward, Meltz is beginning to explore the use of 1980s dot-matrix paper as a medium with texture and depth. According to Meltz, art is at its best when it connects people, no matter the time period of the tools.

“In printmaking, we look at 15th-century technology as being just as relevant as 21st,” Meltz said. “I hope that the research that I do at Rensselaer furthers my work in telling stories, in making bonds between the digital world and the world in which we live. By telling stories, it brings about empathy and understanding, and that’s something the world needs a lot more of, understanding each other.”