More Than 2,100 Degrees To Be Awarded at 215th Commencement Ceremony 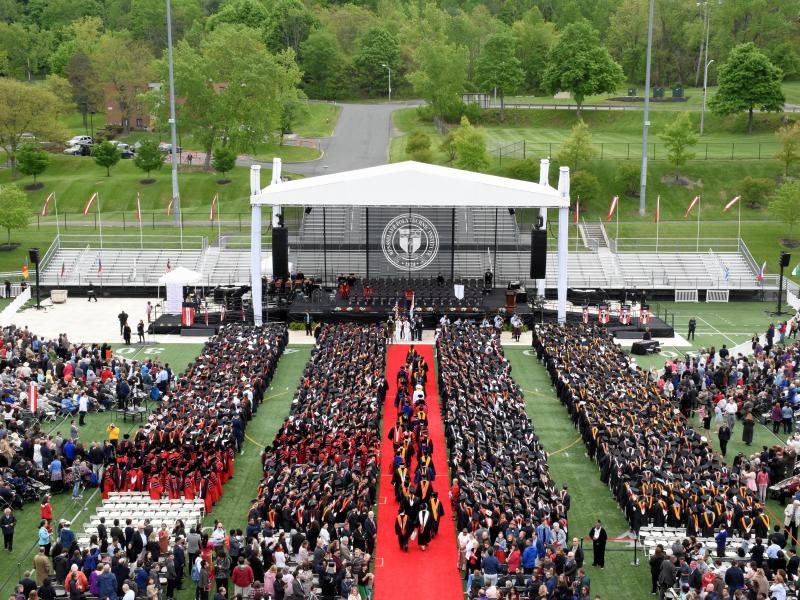 More Than 2,100 Degrees To Be Awarded at 215th Commencement Ceremony

Facts, figures, and useful information provided in overview of Commencement 2021

This spring, Rensselaer Polytechnic Institute, the first technological research university in the United States, will award a total of 2,198 degrees — 115 doctoral degrees, 493 master’s degrees, and 1,590 bachelor’s degrees — to 2,174 students, some of whom have earned multiple degrees.

These accomplishments will be celebrated during the 215th Commencement Ceremony on Saturday, May 22, beginning at 10 a.m. in the East Campus Athletic Village stadium on the Rensselaer campus.

Due to the ongoing COVID-19 pandemic and related health guidelines, only graduating students will participate in person. The event will be live-streamed, and those watching remotely are encouraged to download signs and other creative assets from the Commencement website that can add to their celebrations.

Students in the Class of 2021 hail from 43 states, including New York, and 30 other nations, including Armenia, Bangladesh, Cameroon, Jordan, Nigeria, Poland, and Uruguay.

Of the undergraduate students receiving bachelor’s degrees, 18 earned a perfect 4.0 grade point average. Among them was Molly M. Monge, who will receive the J. Erik Jonsson Prize, which was established by J. Erik Jonsson ’22 to honor the senior who has achieved the highest academic record in the class.

Each year, the graduating class presents the university with a unique class gift. This year, the Class of 2021 has chosen to contribute to the Diversity Initiative Fund, which supports programming and outreach to help expand the diversity of the student body through Admissions initiatives that encourage applications from diverse populations of prospective students.

Rensselaer President Shirley Ann Jackson, whose accomplished career encompasses senior leadership positions in academia, government, and industry, will preside over the ceremony and address the Class of 2021.

During the Commencement ceremony, Class President Lisa Sulmasy, a mechanical engineering major, will also address the graduates. The graduate student speaker will be Stephen Jane, who is graduating with a doctorate in biology.

Brandon Costelloe-Kuehn, a senior lecturer in the Department of Science and Technology Studies, has been selected as the recipient of the David M. Darrin ’40 Counseling Award. This award was established by David M. Darrin ’40 to recognize a faculty member who has made an unusual contribution in the counseling of undergraduate students. The selection of the award recipient is made by Phalanx, Rensselaer’s student leadership honorary society.

The following honorands will be recognized at the ceremony:

Dr. Anthony S. Fauci currently serves as chief medical adviser to the President of the United States, as well as the director of the U.S. National Institute of Allergy and Infectious Diseases at the National Institutes of Health, a position he has held since 1984. He oversees an extensive portfolio of basic and applied research to prevent, diagnose, and treat established infectious diseases, including COVID-19. Fauci has advised seven presidents on HIV/AIDS and many other domestic and global health issues, and he was one of the principal architects of the President’s Emergency Plan for AIDS Relief (PEPFAR), a program that has saved millions of lives throughout the developing world.

Sir Paul M. Nurse is the director and chief executive of the Francis Crick Institute, a biomedical discovery institute researching the biology underlying human health. A geneticist and cell biologist, Nurse’s discoveries have helped to explain how the cell controls its cycle of growth and division. His contributions to cell biology and cancer research were recognized with a knighthood in 1999. In addition, he was jointly awarded the Nobel Prize for Physiology or Medicine in 2001 for his work relating to the discovery of cell cycle regulatory molecules. He has held many senior research leadership roles, including a five-year term as president of the Royal Society.

The Honorable Ashton B. Carter is the director of the Belfer Center for Science and International Affairs at Harvard University’s John F. Kennedy School of Government, where he leads the Technology and Public Purpose project and serves as the Belfer Professor of Technology and Global Affairs. He is also an Innovation Fellow and member of the Corporation at the Massachusetts Institute of Technology. Carter served as the 25th United States Secretary of Defense from 2015 to 2017. He was awarded the Department of Defense Distinguished Service Medal, the department’s highest civilian honor, on five separate occasions.

Dr. John L. Anderson has served as president of the National Academy of Engineering (NAE) since 2019. He began his professional career as an assistant professor of chemical engineering at Cornell University and has since held leadership and faculty positions at Carnegie Mellon University, Case Western Reserve University, and, most recently, at the Illinois Institute of Technology. Anderson was elected to the NAE in 1992 for contributions to the understanding of colloidal hydrodynamics and membrane transport phenomena, and he was elected an NAE councillor in 2015. He is a fellow of the American Academy of Arts and Sciences and the American Association for the Advancement of Science. He was also appointed to the National Science Board in 2014 for a six-year term.

Fauci and Nurse will participate in Commencement weekend events virtually, and Carter and Anderson will appear in person.

The grand tradition of the President’s Commencement Colloquy — a lively and thought-provoking panel discussion with the honorands moderated by President Jackson — will also be revived this year, after taking a pandemic-induced hiatus last year. It will be held at 3:30 p.m. on May 21, 2021, and the theme for the discussion will be “Grand Challenges of Humanity … Opportunity in Disruption.”

While attendance at Colloquy is limited to those who registered in advance, the event will be live streamed.

Please Note: All numbers and facts include Troy and Hartford campus students and degrees issued in August and December 2020. All of the numbers cited are accurate as of May 19, 2021, and are subject to change up until Commencement.