Rensselaer Polytechnic Institute Class of 2021 Recognized for Resilience and Perseverance 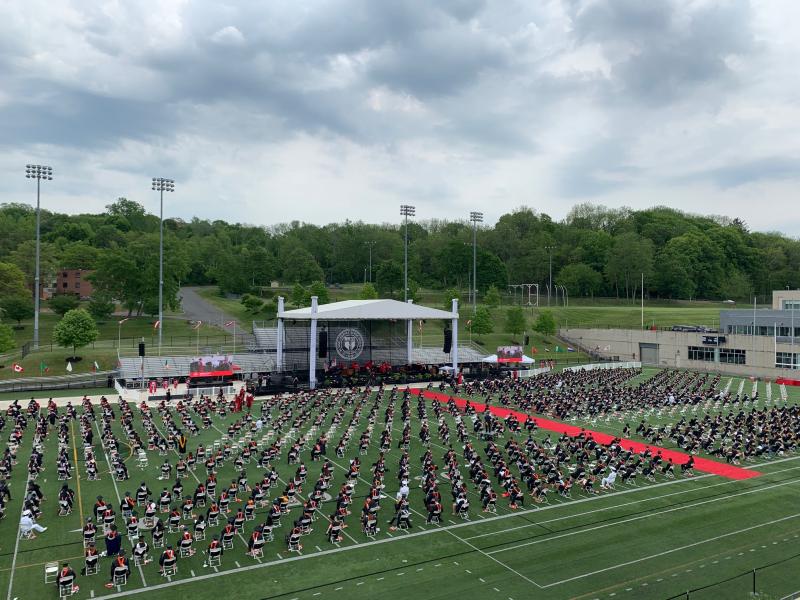 Rensselaer Polytechnic Institute Class of 2021 Recognized for Resilience and Perseverance

During the 215th Commencement Ceremony at Rensselaer Polytechnic Institute, the nation’s first technological university, Dr. Anthony S. Fauci urged the Class of 2021 to work toward a more unified society.

“Please strive to make ours a nation where our differences are our strengths, not the source of discord,” he implored the graduates.

During the ceremony, which was held at the East Campus Athletic Village, Rensselaer awarded a total of 2,198 degrees — 115 doctoral degrees, 493 master’s degrees, and 1,590 bachelor’s degrees — to 2,174 students, some of whom earned multiple degrees. Due to the ongoing COVID-19 pandemic, only graduating students were allowed to attend the ceremony in person.

Rensselaer President Shirley Ann Jackson presided over the ceremony. She congratulated the graduates on their accomplishments as well as their resilience.

Fauci, who currently serves as both chief medical adviser to the President of the United States and as director of the U.S. National Institute of Allergy and Infectious Diseases at the National Institutes of Health, served as one of the Commencement speakers. Joining the ceremony remotely via live stream, he encouraged graduates to “build the America and be the Americans of which your generation, your children, and all of us will be proud.”

The Honorable Ashton B. Carter, the former United States Secretary of Defense and current director of the Belfer Center for Science and International Affairs at Harvard University’s John F. Kennedy School of Government, also served as a Commencement speaker. Speaking to the graduates from the Commencement stage, he observed that the many challenges facing the world are “going to require what you have — that is, the deep STEM knowledge and the broad human knowledge that RPI is so famous for.”

“So, I’ll cherish my RPI degree, even though it’s only honorary,” he said, “because it stands for the real thing you’re getting today, and it stands for what you will do — so much for the world, including the advance of public purpose.”

Fauci and Carter each received an honorary doctor of science degree from Rensselaer.

Sir Paul M. Nurse, a Nobel Laureate and the director and chief executive of the Francis Crick Institute, also received an honorary doctor of science degree. In a pre-recorded message, Nurse told the graduates to hold onto their curiosity, enthusiasm, and sense of humor. “Curiosity is a feature of youth but often diminishes as you get older,” he said. “Resist this. Remain curious.”

Attending the ceremony in person, Dr. John L. Anderson, the current president of the National Academy of Engineering, received an honorary doctor of engineering degree and offered advice to the graduates.

“I always believe that tomorrow I will do better than I did today,” he said. “This belief is very helpful when you have a bad day, and it ensures your growth will be exponential. I highly recommend it.”

Two student speakers also addressed their peers during the ceremony.

Graduate student speaker Stephen Jane, who earned a doctorate in biology from Rensselaer, noted that each of his fellow graduate students has a great gift, the full appreciation and realization of which requires humility and wisdom.

“I believe there is a reason you were given what you were given,” he said. “I am sure it is to somehow use this gift to make a positive impact on the world around you.”

Lisa Sulmasy, a mechanical engineering major and the Class of 2021 president, recognized the many unprecedented situations her fellow students encountered, and through which they persevered.

“We took the unknown head on and selflessly uncovered it for students to come,” she said. “In doing so, we not only laid the groundwork needed for future generations, but also packed their bags and prepared them for the journey ahead.”