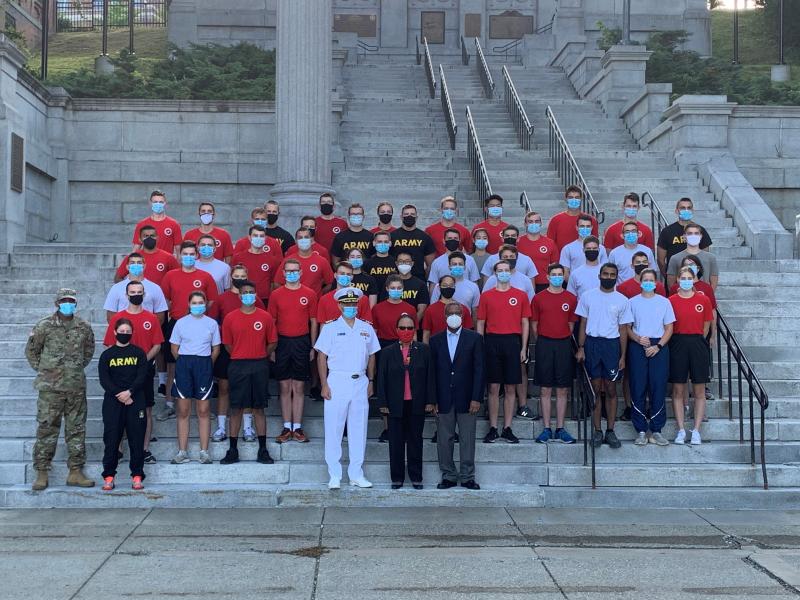 Dr. Shirley Ann Jackson and the cadre and officer candidates of the New York Joint Service ROTC Programs honored the first responders who gave their lives on 9/11 at a joint military service event on the campus of Rensselaer Polytechnic Institute.

Rensselaer students serving in all branches of the Reserve Officers’ Training Corps (ROTC) climbed the Louis Rubin Memorial Approach in memory of the first responders who made the 110-story climb of the towers at the World Trade Center 20 years ago.

“The fabric of the world as we knew it was torn apart that morning,” President Jackson said in a speech to the formation of nearly 50 ROTC students. “You, our future military leaders, are our hope for a peaceful future. As you run those 110 stories today, and imagine the dangers you someday may have to overcome in order to rescue others, know that our thoughts and prayers always are with you.

For video of and interviews from the event, click here.

Following remarks by President Jackson that noted the many Rensselaer alumni who have served in the military, the cadets and midshipmen shared a moment of silence before scaling the landmark Rensselaer staircase known as “the Approach.”

“I grew up in a New Jersey town where I had a view of New York City out my window,” said Air Force ROTC cadet 2nd Lt. Alexander Ryan, who is studying mechanical and aeronautical engineering. “As I was climbing the stairs, I was thinking about the physical burden of those first responders. Today’s event was a somber reminder of what they had to go through. We must never forget them.”

President Jackson was introduced by Captain Jeffrey Joseph, commanding officer of the Naval ROTC program, who spoke to the students about the importance of an event like the stair climb to better understand their place in defending the country.

“When those muscles are tired and you feel like you might want to give up, remember that none of the first responders gave up that day,” Joseph said.