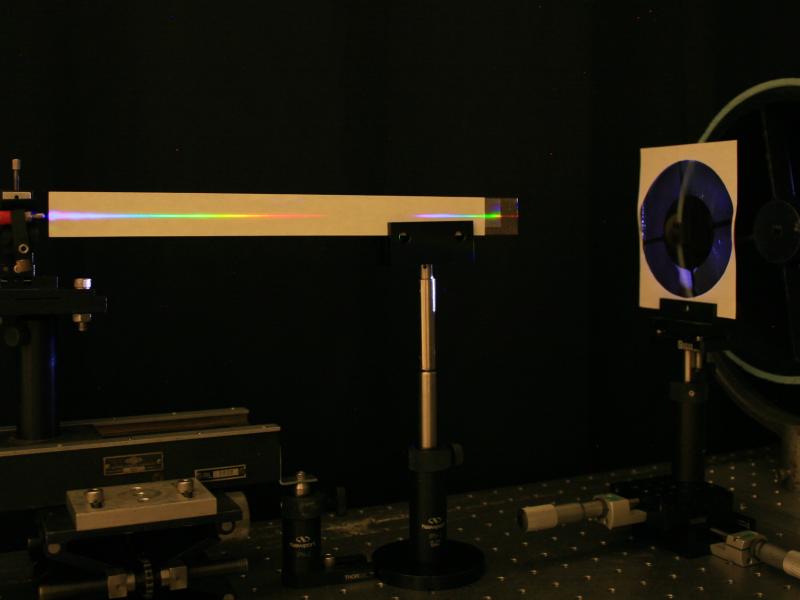 Inspired by a concept for discovering exoplanets with a giant space telescope, a team of researchers is developing holographic lenses that render visible and infrared starlight into either a focused image or a spectrum. The experimental method, detailed in an article appearing today in Nature Scientific Reports, could be used to create a lightweight flexible lens, many meters in diameter, that could be rolled for launch and unfurled in space.

“We use two spherical waves of light to produce the hologram, which gives us fine control over the diffractive grating recorded on the film, and the effect it has on light — either separating light with super sensitivity, or focusing light with high resolution,” said Mei-Li Hsieh, a visiting researcher at Rensselaer Polytechnic Institute and an expert in optics and photonics who established a mathematical solution to govern the output of the hologram. “We believe this model could be useful in applications that require extremely high spectral resolution spectroscopy, such as analysis of exoplanets.”

Hsieh, who also holds a faculty position at National Yang Ming Chiao Tung University in Taiwain, along with Rensselaer physicists Shawn-Yu Lin and Heidi Jo Newberg, worked with Thomas D. Ditto, an artist and inventor who conceived the idea of an optical space telescope freed of conventional, and heavy, glass mirrors and lenses. Ditto first worked at Rensselaer in the 1970s and is currently a visiting researcher in astrophysics.

Telescopes that must be launched into space (to benefit from a view unimpeded by Earth’s atmosphere) are limited by the weight and bulk of glass mirrors used to focus light, which can realistically span only a few meters in diameter. By contrast, the lightweight flexible holographic lens — more properly called a “holographic optical element” — used to focus light could be dozens of meters across. Such an instrument could be used to directly observe an exoplanet, a leap over current methods that detect exoplanets based on their effect on light coming from the star they orbit, said Newberg, a Rensselaer professor of physics, applied physics, and astronomy.

“To find Earth 2.0, we really want to see exoplanets by direct imaging — we need to be able to look at the star and see the planet separate from the star. And for that, we need high resolution and a really big telescope,” said Newberg, an astrophysicist and expert in galactic structure.

The holographic optical element is a refined version of a Fresnel lens, a category of lenses that use concentric rings of prisms arrayed in a flat plane to mimic the focusing ability of a curved lens without the bulk. The concept of the Fresnel lens — which was developed for use in lighthouses —dates to the 19th century, with modern-day Fresnel lenses of glass or plastic found in automobile lamps, micro-optics, and camera screens.

But while Fresnel holographic optical elements — created by exposing a light-sensitive plastic film to two sources of light at different distances from the film — are not uncommon, existing methods were limited to lenses that could only focus light, rather than separating it into its constituent colors.

The new method allows the designers to either focus light onto a single point or disperse it into its constituent colors, producing a spectrum of pure colors, said Lin, corresponding author and a Rensselaer professor of physics, applied physics, and astronomy. The method uses two sources of light, positioned very close to one another, which create concentric waves of light that — as they travel toward the film — either build or cancel each other out. This pattern of convergence or interference can be tuned based on the formulas Hsieh developed. It is printed, or “recorded,” onto the film as a holographic image and, depending on how the image is structured, light passing through the holographic optical element is either focused or stretched.

“We wanted to stretch the light, so that we could separate it into different wavelengths. Any Fresnel lens will stretch the light a little, but not enough,” said Lin, an expert in photonic crystals and nano-photonics. “With our method, we can have super resolution on one end, or super sensitive — with each color separated. When the light is stretched like that, the color is very good, as pure and as vivid as you can get.”

Hsieh, Newberg, Lin, and Ditto were joined in the research by Yi-Wen Lee and Shiuan-Huei Lin of National Yang Ming Chiao Tung University. “Experimental realization of a Fresnel hologram as a super spectral resolution optical element” was produced with support from the NASA Innovative Advanced Concepts (NIAC) program and a grant from the Department of Education in Taiwan.