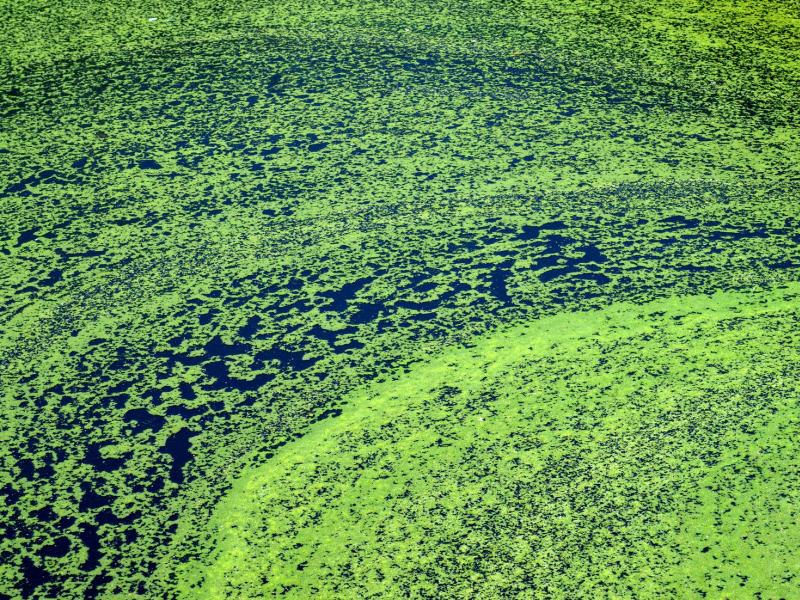 A grant from the National Science Foundation will allow Shayla Sawyer, a professor in the Department of Electrical, Computer, and Systems Engineering at Rensselaer Polytechnic Institute, and Rick Relyea, a professor of biological sciences at Rensselaer, to better understand the growing problem of harmful algal blooms (HABs).

Harmful algal blooms are uncontrolled growths of algae that produce toxins or severely reduce the amount of oxygen in lakes and oceans, creating an environment that is dangerous for humans and aquatic ecosystems and that can threaten the economy of regions that rely on tourism and fishing. One cause of these HABs can be linked to an increase in algal nutrients, such as nitrogen.

With the occurrence of HABs on the rise across the globe, determining how changes in nitrogen levels in waterbodies affect the location and severity of the blooms is a critical step in keeping the public safe and finding solutions for the growing problem.

“Water quality is a growing concern as freshwater resources are limited in many places across our country and around the world,” Dr. Sawyer said. “This prototype can potentially play a key role in the future of aquatic environments.”

Dr. Relyea, a leading expert on aquatic biology and freshwater ecosystems, and Dr. Sawyer, a specialist in the possible applications of hybrid inorganic/organic materials for optoelectronic devices and sensors, will collaborate with colleagues in the Republic of Ireland and Northern Ireland to design, build, validate, and field test a sensor system for the real-time detection of the three most commonly monitored forms of nitrogen: nitrate, nitrite, and ammonia/ammonium.

Using an advanced microfluidic, colorimeteric-based sensor system developed by Dr. Margaret McCaul from Dublin City University already in use in water environments, the system will trap all nitrogen forms in a polymer-based filter designed by Dr. Panagiotis Manesiotis at Queen’s University in Belfast. Then, using novel research by Dr. Sawyer, the team will use bacteria to convert the collected nitrogen into nitrite, the easiest form of nitrogen to measure. Dr. Sawyer will look to her extensive experience developing photodetectors with high sensitivity to specific wavelengths of light to improve the detection of nitrites. Finally, Dr. Relyea’s research team will field test prototypes of the instrument under a wide range of freshwater and marine environments to quantify accuracy, reliability, and durability under real-world conditions.

“From well-proven, field-tested systems and equipment to pioneering research techniques, our team is bringing together innovations in a range of technological readiness,” Dr. Sawyer said. “Combining these complementary ideas into one system enables a high-risk approach to move rapidly from research idea to working prototype in the field with immediate impact on biological research.”

Dr. Sawyer’s work functionalizes bacteria as “microbial machines.” In this case, microbes are used primarily as a nitrogen converter to make detection of nitrogen easier in an existing system. The research will also investigate whether it is also possible to detect electrons as these machines work to convert nitrogen. In other recently published research, another “microbial machine” function was to produce nanomaterials at room temperature using metal-breathing bacteria.

Monitoring the real-time dynamics of aquatic nutrients in complex natural environments has the potential to bring transformative new insights into how these nutrients impact aquatic ecosystems, with a focus on the global issue of harmful algal blooms. Such insights are crucial for improving capabilities to understand, predict, and mitigate these impacts. In multiple lakes throughout New York State, Dr. Relyea directs a research team in identifying the underlying causes of HABs using advanced sensors as part of The Jefferson Project, which is a collaboration between Rensselaer, IBM Research, and The Lake George Association.

“This collaboration of global research groups represents a synergy of expertise in building a new generation of nitrogen sensors that will help us better monitor human impacts on aquatic ecosystems, including streams, rivers, wetlands, lakes, estuaries, and oceans,” said Dr. Relyea, who is also the director of the Darrin Fresh Water Institute, a multidisciplinary environmental research center at Rensselaer with a primary research focus on the ecological impacts of human activities. “Such instruments will provide rapid measurement of nutrients and they can be integrated into existing sensor networks in waterbodies around the world.”

Examples of HABs from the summer of 2021 can be found both domestically and internationally. Lake Erie experienced a “moderately severe” HAB that covered 530 square miles. A “red tide” killed more than 900 tons of fish and other marine life in Pinellas County, Florida. Scientists supported by the National Oceanic and Atmospheric Administration declared the 2021 Gulf of Mexico “dead zone,” an area of low- to no-oxygen, to be above average at 6,334 square miles – a little smaller than the size of Lake Ontario.

The $620,000, three-year grant, “U.S.-ROI-NI R&D Partnership: Ultrasensitive Nitrogen Sensor using Imprinted Polymer Assisted-Bacteria for Real-Time Monitoring of Water Quality,” is also supported by an additional $820,000 from the Republic of Ireland and Northern Ireland, UK combined, for a total of $1.4 million in funding for the project.