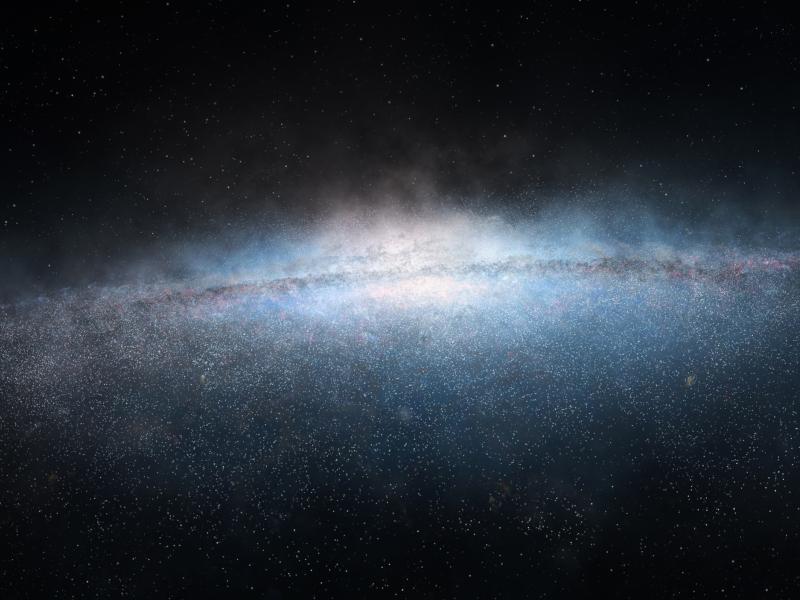 Astrophysicists for the first time have calculated the original mass and size of a dwarf galaxy that was shredded in a collision with the Milky Way billions of years ago. Reconstructing the original dwarf galaxy, whose stars today thread through the Milky Way in a stellar “tidal stream,” will help scientists understand how galaxies like the Milky Way formed, and could aid in the search for dark matter in our galaxy.

“We’ve been running simulations that take this big stream of stars, back it up for a couple of billion years, and see what it looked like before it fell into the Milky Way,” said Heidi Newberg, a professor of physics, astrophysics, and astronomy at Rensselaer Polytechnic Institute. “Now we have a measurement from data, and it’s the first big step toward using the information to find dark matter in the Milky Way.”

Billions of years ago, the dwarf galaxy and others like it near the Milky Way were pulled into the larger galaxy. As each dwarf galaxy coalesced with the Milky Way, its stars were pulled by “tidal forces,” the same kind of differential forces that make tides on Earth. The tidal forces distorted and eventually ripped the dwarf galaxy apart, stretching its stars into a tidal stream flung across the Milky Way. Such tidal mergers are fairly common, and Newberg estimates that “immigrant” stars absorbed into the Milky Way make up most of the stars in the galactic halo, a roughly spherical cloud of stars that surrounds the spiral arms of the central disk.

Critically, the position and velocities of the tidal stream stars carry information about the Milky Way’s gravitational field.

Watch a video of Heidi Newberg explaining this research.

Reconstructing the dwarf galaxy is a research task that combines data from star surveys, physics, and Newberg’s MilkyWay@Home distributed supercomputer, which harnesses 1.5 petaflops –a measure of computer processing speed– of home computer power donated by volunteers. This large amount of processing power makes it possible to simulate the destruction of a large number of dwarf galaxies with different shapes and sizes, and identify a model that best matches the tidal stream of stars that we see today.

“It’s an enormous problem, and we solve it by running tens of thousands of different simulations until we get one that actually matches. And that takes a lot of computer power, which we get with the help of volunteers all over the world who are part of MilkyWay@Home,” Newberg said “We’re brute-forcing it, but given how complicated the problem is, I think this method has a lot of merit.”

As published today in The Astrophysical Journal, Newberg’s team estimates the total mass of the original galaxy whose stars today form the Orphan-Chenab Stream as 2x107 times the mass of our sun.

However, only a little more than 1% of that mass is estimated to be made up of ordinary matter like stars. The remainder is assumed to be a hypothetical substance called dark matter that exerts gravitational force, but that we cannot see because it does not absorb or give off light. The existence of dark matter would explain a discrepancy between the gravitational pull of the mass of the matter we can see, and the far larger pull needed to account for the formation and movement of galaxies. The gravitational pull from dark matter is estimated to make up as much as 85% of the matter in the universe, and tidal streams of stars that fell in with dwarf galaxies could be used to determine where dark matter is located in our galaxy.

“Tidal stream stars are the only stars in our galaxy for which it is possible to know their positions in the past,” Dr. Newberg said. “By looking at the current speeds of stars along a tidal stream, and knowing they all used to be in about the same place and moving at the same speed, we can figure out how much the gravity changes along that stream. And that will tell us where the dark matter is in the Milky Way.”

The research also finds that the progenitor of the Orphan-Chenab stream has less mass than the galaxies measured in the outskirts of our galaxy today, and if this small mass is confirmed it could change our understanding of how small stellar systems form and then merge together to make larger galaxies like our Milky Way.

Dr. Newberg, an expert in the galactic halo, is a pioneer in identifying stellar tidal streams in the Milky Way. One day, she hopes that MilkyWay@home will help her measure more than the properties of one disintegrated dwarf galaxy. Ideally, she would like to simultaneously fit many dwarf galaxies, their orbits, and the properties of the Milky Way galaxy itself. This goal is complicated by the fact that the properties of our galaxy change over the billions of years that it takes for a small galaxy to fall in and be ripped apart to make these tidal streams.

“By painstakingly tracking the path of stars pulled into the Milky Way, Dr. Newberg and her team are building an image that shows us not just a dwarf galaxy long-since destroyed, but also sheds light on the formation of our galaxy and the very nature of matter,” said Curt Breneman, dean of the Rensselaer School of Science.

At Rensselaer, Newberg was joined in the research by Eric J. Mendelsohn, Siddhartha Shelton, Jeffery M. Thompson. Carl J. Grillmair at the California Institute of Technology, and Lawrence M. Widrow at Queen’s University, also contributed to the finding. “Estimate of the Mass and Radial Profile of the Orphan-Chenab Stream’s Dwarf Galaxy Progenitor Using MilkyWay@home” was published with support from the National Science Foundation, and with data from the Sloan Digital Sky Survey, the Dark Energy Camera at the Cerro Tololo Inter-American Observatory, and the National Aeronautics and Space Administration/Infrared Processing & Analysis Center Infrared Science Archive.