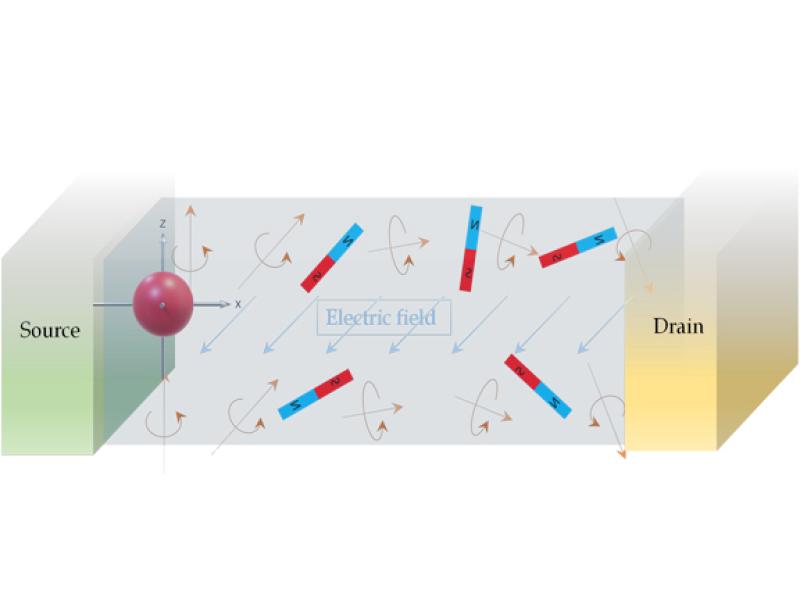 In a Rashba-Dresselhaus spin transistor, the spin of electrons could be disrupted by spin-phonon coupling or non-ideal internal magnetic field distribution. Credit: Jian Shi

Electron spin, rather than charge, holds the key

An electron has a spin degree of freedom, meaning that it not only holds a charge but also acts like a little magnet. In spintronics, a key task is to use an electric field to control electron spin and rotate the north pole of the magnet in any given direction.

The spintronic field effect transistor harnesses the so-called Rashba or Dresselhaus spin-orbit coupling effect, which suggests that one can control electron spin by electric field. Although the method holds promise for efficient and high-speed computing, certain challenges must be overcome before the technology reaches its true, miniature but powerful, and eco-friendly, potential.

For decades, scientists have been attempting to use electric fields to control spin at room temperature but achieving effective control has been elusive. In research recently published in Nature Photonics, a research team led by Jian Shi and Ravishankar Sundararaman of Rensselaer Polytechnic Institute and Yuan Ping of the University of California at Santa Cruz took a step forward in solving the dilemma.

Simulations revealed that this material was particularly exciting, according to Dr. Sundararaman, associate professor of materials science and engineering. “The internal magnetic field is simultaneously large and perfectly distributed in a single direction, which allows the spins to rotate predictably and in perfect concert,” he said. “This is a key requirement to use spins for reliably transmitting information.”

“It’s a step forward toward the practical realization of a spintronic transistor,” Dr. Shi said.

This work was supported by the United States Army Research Office (Physical Properties of Materials program by Dr. Pani Varanasi), the Air Force Office of Scientific Research, and the National Science Foundation.