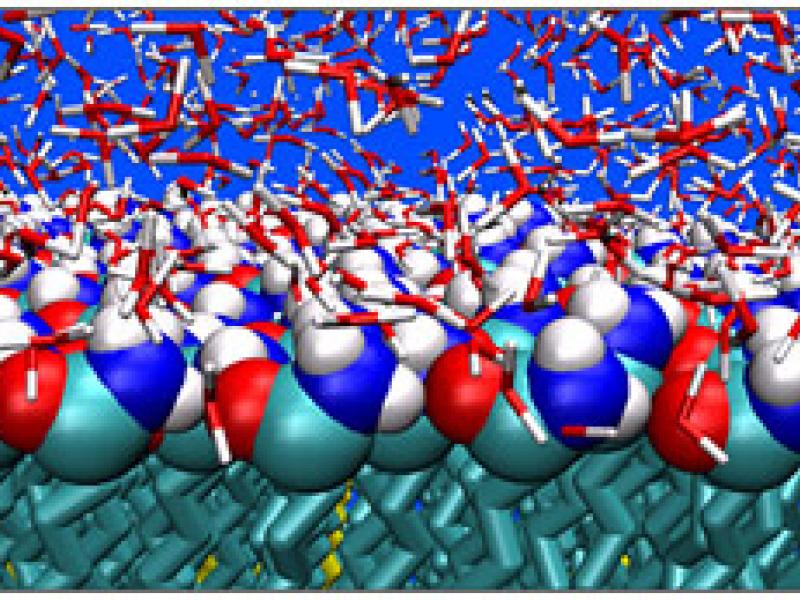 Researchers at Rensselaer Polytechnic Institute have discovered there is a strong correlation between the speed at which heat moves between two touching materials and how strongly those materials are bonded together. The study shows that this flow of heat from one material to another can be dramatically altered by “painting” a thin atomic layer between materials. Changing the interface fundamentally alters the way the materials interact.

The speed at which heat moves between two materials touching each other is a potent indicator of how strongly they are bonded to each other, according to a new study by researchers at Rensselaer Polytechnic Institute.

Additionally, the study shows that this flow of heat from one material to another, in this case one solid and one liquid, can be dramatically altered by “painting” a thin atomic layer between materials. Changing the interface fundamentally changes the way the materials interact.

“If you have a nanoparticle that is inside a liquid solution, you can’t just ‘peel away’ the liquid to measure how strongly it is bonded to the surrounding molecules,” said Pawel Keblinski, professor in Rensselaer’s Department of Materials Science and Engineering, who co-led the study. “Instead, we show that you can measure the strength of these bonds simply by measuring the rate of heat flow from the nanoparticle to the surrounding liquid.”

“Interfaces are an exciting new frontier for doing fundamental studies of this type. If you peek into complex biological systems – a cell, for example – they contain a high density of interfaces, between different proteins or between protein and water,” said Shekhar Garde, the Elaine and Jack S. Parker Professor and head of Rensselaer’s Department of Chemical and Biological Engineering, who co-led the study with Keblinski. “Our approach possibly provides another handle to quantify how proteins talk to each other or with the surrounding water.”

Results of the study, titled “How wetting and adhesion affect thermal conductance of a range of hydrophobic to hydrophilic aqueous solutions,” were published today in Physical Review Letters.

Keblinski and Garde used extensive molecular dynamics simulations to measure the heat flow between a variety of solid surfaces and water. They simulated a broad range of surface chemistries and showed that thermal conductance, or how fast heat is transferred between a liquid and a solid, is directly proportional to how strongly the liquid adhered to the solid.

“In the case of a mercury thermometer, thermal expansion correlates directly with temperature,” Keblinski said. “What we have done, in a sense, is create a new thermometer to measure the interfacial bonding properties between liquids and solids.”

This fundamental discovery, which helps to better understand how water sticks to or flows past a surface, has implications for many different heat transfer applications and processes including boiling and condensation. Of particular interest is how this discovery can benefit new systems for cooling and displacing heat from computer chips, a critical issue currently facing the semiconductor industry, Garde said.

More generally, the authors said the study sheds new light on the behavior of water at various solid interfaces, which has direct implications ranging from the binding of proteins and other molecules to surfaces, to biological self-assembly in interfacial environments.

Visit the Web sites of Garde and Keblinski for more information on their research programs.