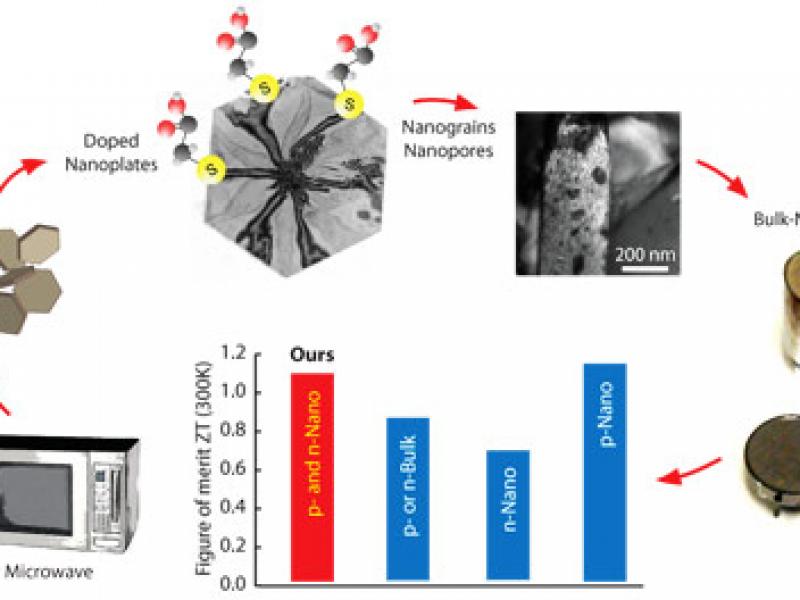 Engineering researchers at Rensselaer Polytechnic Institute have developed a new method for creating advanced nanomaterials that could lead to highly efficient refrigerators and cooling systems requiring no refrigerants and no moving parts. The key ingredients for this innovation are a dash of nanoscale sulfur and a normal, everyday microwave oven.

At the heart of these solid-state cooling systems are thermoelectric materials, which can convert electricity into a range of different temperatures—from hot to cold. Thermoelectric refrigerators employing these principles have been available for more than 20 years, but they are still small and highly inefficient. This is largely because the materials used in current thermoelectric cooling devices are expensive and difficult to make in large quantities, and do not have the necessary combination of thermal and electrical properties. A new study, published today in the journal Nature Materials, overcomes these challenges and opens the door to a new generation of high-performance, cost-effective solid state refrigeration and air conditioning.

See a video of Ramanath explaining the study at: http://www.youtube.com/user/rpirensselaer?feature=mhee#p/u/12/hgmBwg3FeS4

Driving this research breakthrough is the idea of intentionally contaminating, or doping, nanostructured thermoelectric materials with barely-there amounts of sulfur. The doped materials are obtained by cooking the material and the dopant together for few minutes in a store-bought $40 microwave oven. The resulting powder is formed into pea-sized pellets by applying heat and pressure in a way that preserves the properties endowed by the nanostructuring and the doping. These pellets exhibit properties better than the hard-to-make thermoelectric materials currently available in the marketplace. Additionally, this new method for creating the doped pellets is much faster, easier, and cheaper than conventional methods of making thermoelectric materials.

“This is not a one-off discovery. Rather, we have developed and demonstrated a new way to create a whole new class of doped thermoelectric materials with superior properties,” said Ramanath, a faculty member in the Department of Materials Science and Engineering at Rensselaer. “Our findings truly hold the potential to transform the technology landscape of refrigeration and make a real impact on our lives.”

Results of the study are detailed in the Nature Materials paper “A new class of doped nanobulk high figure of merit thermoelectrics by scalable bottom-up assembly.” See the paper online at: http://dx.doi.org/10.1038/NMAT3213

Trying to engineer thermoelectric materials is somewhat like playing a game of “tug of war,” Ramanath said. Researchers endeavor to control three separate properties of the material: electrical conductivity, thermal conductivity, and Seebeck coefficient. Manipulating one of these properties, however, necessarily affects the other two. This new study demonstrates a new way to minimize the interdependence of these three properties by combining doping and nanostructuring in well-known thermoelectric materials such as tellurides and selenides based on bismuth and antimony.

The goal of tweaking these three properties is to create a thermoelectric material with a high figure of merit, or ZT, which is a measure of how efficient the material is at converting heat to electricity. The new pea-sized pellets of nanomaterials developed by the Rensselaer team demonstrated a ZT of 1 to 1.1 at room temperature. Since such high values are obtained even without optimizing the process, the researchers are confident that higher ZT can be obtained with some smart engineering.

“It’s really amazing as to how nanostructures seasoned with just a few atoms of sulfur can lead to such superior thermoelectric properties of the bulk material made from the nanostructures, and allows us to reap the benefits of nanostructuring on a macroscale,” Ramanath said.

An important facet of the discovery is the ability to make both p-type (positive charge) and n-type (negative charge) thermoelectric nanomaterials with a high ZT. Up until now, researchers around the world have only been able to make large quantities of p-type materials with high ZT.

Additionally, the new study shows the Rensselaer research team can make batches of 10 to 15 grams (enough to make several pea-sized pellets) of the doped nanomaterial in two to three minutes with a microwave oven. Larger quantities can be produced using industrial-sized microwaves ovens.

“Our ability to scalably and inexpensively produce both p- and n-type materials with a high ZT paves the way to the fabrication of high-efficiency cooling devices, as well as solid-state thermoelectric devices for harvesting waste heat or solar heat into electricity,” said Borca-Tasciuc, professor in the Department of Mechanical, Aerospace, and Nuclear Engineering at Rensselaer.

“This is a very exciting discovery because it combines the realization of novel and useful thermoelectric properties with a demonstrated processing route forward to industrial applications,” said Siegel, the Robert W. Hunt Professor of Materials Science and Engineering at Rensselaer.

Rensselaer graduate student Rutvik J. Mehta carried out this work for his doctoral thesis. Mehta, Ramanath, and Borca-Tasciuc have filed a patent and formed a new company, ThermoAura Inc., to further develop and market the new thermoelectric materials technology. Mehta has since graduated and is now a post-doctoral associate at Rensselaer. He also serves as president of ThermoAura.

Beyond refrigerators and air conditioning, the researchers envision this technology could one day be used to cool computer chips.

Along with Ramanath,Borca-Tasciuc, Siegel, and Mehta, co-authors of the paper are Rensselaer graduate students Yanliang Zhang, Chinnathambi Karthik, and Binay Singh.

This research is funded by support from the National Science Foundation (NSF); IBM through the Rensselaer Nanotechnology Center; and the U.S. Department of Energy through the S3TEC Energy Frontiers Research Center at the Massachusetts Institute of Technology (MIT).

For more information on the research of Ramanath, Borca-Tasciuc, and Siegel at Rensselaer, visit: