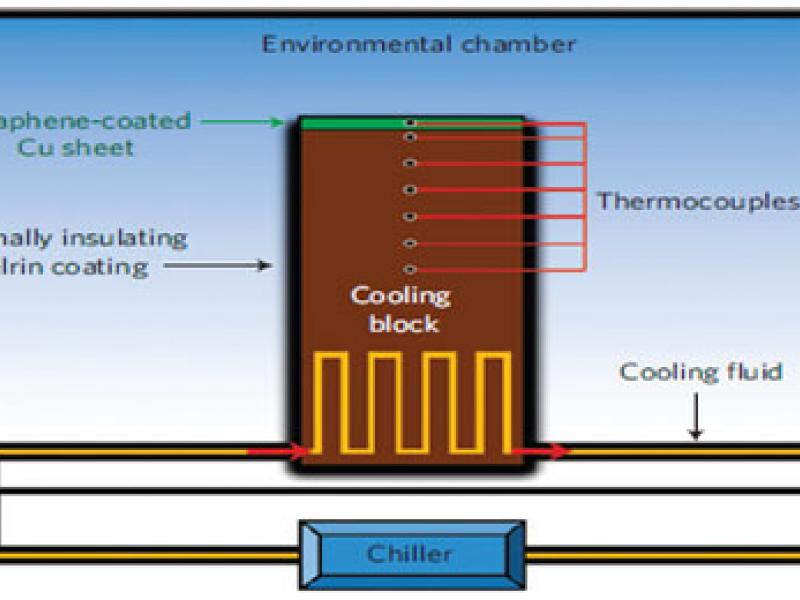 Graphene is the thinnest material known to science. The nanomaterial is so thin, in fact, water often doesn’t even know it’s there.

Engineering researchers at Rensselaer Polytechnic Institute and Rice University coated pieces of gold, copper, and silicon with a single layer of graphene, and then placed a drop of water on the coated surfaces. Surprisingly, the layer of graphene proved to have virtually no impact on the manner in which water spreads on the surfaces.

Results of the study were published Sunday in the journal Nature Materials. The findings could help inform a new generation of graphene-based flexible electronic devices. Additionally, the research suggests a new type of heat pipe that uses graphene-coated copper to cool computer chips.

“We coated several different surfaces with graphene, and then put a drop of water on them to see what would happen. What we saw was a big surprise—nothing changed. The graphene was completely transparent to the water,” said Koratkar, a faculty member in the Department of Mechanical, Aerospace, and Nuclear Engineering and the Department of Materials Science and Engineering at Rensselaer. “The single layer of graphene was so thin that it did not significantly disrupt the non-bonding van der Waals forces that control the interaction of water with the solid surface. It’s an exciting discovery, and is another example of the unique and extraordinary characteristics of graphene.”

Results of the study are detailed in the Nature Materials paper “Wetting transparency of graphene.” See the paper online at: http://dx.doi.org/10.1038/NMAT3228

Essentially an isolated layer of the graphite found commonly in our pencils or the charcoal we burn on our barbeques, graphene is single layer of carbon atoms arranged like a nanoscale chicken-wire fence. Graphene is known to have excellent mechanical properties. The material is strong and tough and because of its flexibility can evenly coat nearly any surface. Many researchers and technology leaders see graphene as an enabling material that could greatly advance the advent of flexible, paper-thin devices and displays. Used as a coating for such devices, the graphene would certainly come into contact with moisture. Understanding how graphene interacts with moisture was the impetus behind this new study.

These results surprised the researchers. Graphene is impermeable, as the tiny spaces between its linked carbon atoms are too small for water,or a single proton, or anything else to fit through. Because of this, one would expect that water would not act as if it were on gold, silicon, or copper, since the graphene coating prevents the water from directly contacting these surfaces. But the research findings clearly show how the water is able to sense the presence of the underlying surface, and spreads on those surfaces as if the graphene were not present at all.

As the researchers increased the number of layers of graphene, however, it became less transparent to the water and the contact angles jumped significantly. After adding six layers of graphene, the water no longer saw the gold, copper, or silicon and instead behaved as if it was sitting on graphite.

The reason for this perplexing behavior is subtle. Water forms chemical or hydrogen bonds with certain surfaces, while the attraction of water to other surfaces is dictated by non-bonding interactions called van der Waals forces. These non-bonding forces are not unlike a nanoscale version of gravity, Koratkar said. Similar to how gravity dictates the interaction between the Earth and sun, van der Waals forces dictate the interaction between atoms and molecules.

In the case of gold, copper, silicon, and other materials, the van der Waals forces between the surface and water droplet determine the attraction of water to the surface and dictate how water spreads on the solid surface. In general, these forces have a range of at least several nanometers. Because of the long range, these forces are not disrupted by the presence of a single-atom-thick layer of graphene between the surface and the water. In other words, the van der Waals forces are able to “look through” ultra-thin graphene coatings, Koratkar said.

If you continue to add additional layers of graphene, however, the van der Waals forces increasingly “see” the carbon coating on top of the material instead of the underlying surface material. After stacking six layers of graphene, the separation between the graphene and the surface is sufficiently large to ensure that the van der Waals forces can now no longer sense the presence of the underlying surface and instead only see the graphene coating. On surfaces where water forms hydrogen bonds with the surface, the wetting transparency effect described above does not hold because such chemical bonds cannot form through the graphene layer.

Along with conducting physical experiments, the researchers verified their findings with molecular dynamics modeling as well as classical theoretical modeling.

“We found that van der Waals forces are not disrupted by graphene. This effect is an artifact of the extreme thinness of graphene—which is only about 0.3 nanometers thick,” Koratkar said. “Nothing can rival the thinness of graphene. Because of this, graphene is the ideal material for wetting angle transparency.”

“Moreover, graphene is strong and flexible, and it does not easily crack or break apart,” he said. “Additionally, it is easy to coat a surface with graphene using chemical vapor deposition, and it is relatively uncomplicated to deposit uniform and homogeneous graphene coatings over large areas. Finally, graphene is chemically inert, which means a graphene coating will not oxidize away. No single material system can provide all of the above attributes that graphene is able to offer.”

A practical application of this new discovery is to coat copper surfaces used in dehumidifiers. Because of its exposure to water, copper in dehumidifier systems oxidizes, which in turn decreases its ability to transfer heat and makes the entire device less efficient. Coating the copper with graphene prevents oxidation, the researchers said, and the operation of the device is unaffected because graphene does not change the way water interacts with copper. This same concept may be applied to improve the ability of heat pipes to dissipate heat from computer chips, Koratkar said.

“It’s an interesting idea. The graphene doesn’t cause any significant change to the wettability of copper, and at the same time it passivates the copper surface and prevents it from oxidizing,” he said.

This research was supported in part by the Advanced Energy Consortium (AEC); the National Science Foundation (NSF); and the Office of Naval Research (ONR) graphene Multidisciplinary University Research Initiative (MURI).

For more information on Koratkar’s graphene research at Rensselaer, visit: