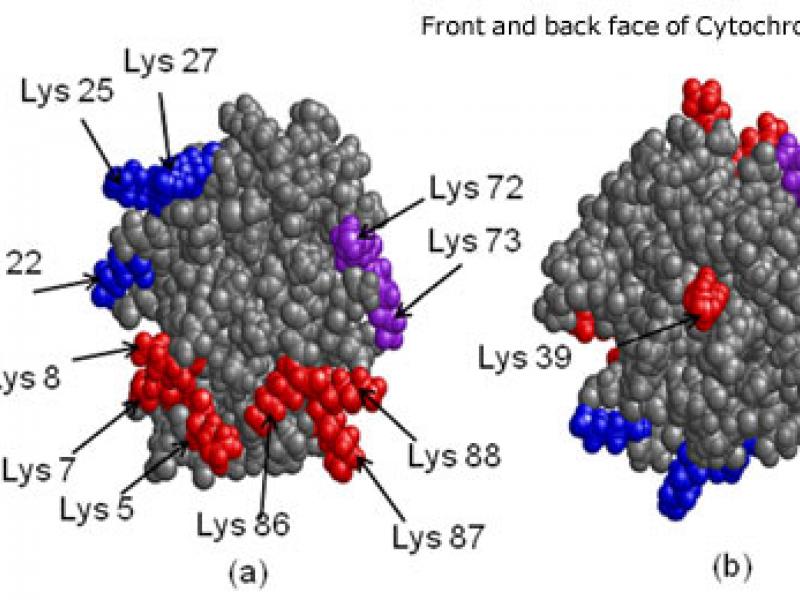 A new study led by nanotechnology and biotechnology experts at Rensselaer Polytechnic Institute is providing important details on how proteins in our bodies interact with nanomaterials. In their new study, published in the Feb. 2 online edition of the journal Nano Letters, the researchers developed a new tool to determine the orientation of proteins on different nanostructures. The discovery is a key step in the effort to control the orientation, structure, and function of proteins in the body using nanomaterials.

“To date, very little is known about how proteins interact with a surface at the nanoscale,” said Jonathan Dordick, director of the Center for Biotechnology and Interdisciplinary Studies at Rensselaer (CBIS), the Howard P. Isermann ’42 Professor of Chemical and Biological Engineering, and co-corresponding author of the study. “With a better understanding of how a protein interacts with a surface, we can develop custom nanoscale surfaces and design proteins that can do a variety of amazing tasks in the human body.”

Researchers seek to use nanotechnology in a variety of biological and medical applications, ranging from biosensors that can detect cancer in the body to scaffolds that help grow new tissues and organs, according to the researchers. Such technologies involve the interaction between biological cells and non-biological nanoscale materials. These interactions are controlled in part by proteins at the interface between the two materials. At such a minuscule level, the tiniest change in the structure of a material can vastly change the proteins involved and thus alter how the cells of the human body respond to the nanomaterial. In fact, proteins are among the most complex (and fickle) molecules in our bodies, rapidly changing their orientation or structure and thus their ability to interact with other molecules. Controlling their orientation and structure through their interactions with nanomaterials is essential to their reliable and safe use in new biotechnologies, according to Dordick.

“We have learned over the past decade to create nanomaterials with a wide variety of controlled structures, and we have discovered and begun to learn how these structures can positively impact cellular activity,” said Richard Siegel, the Robert W. Hunt Professor of Materials Science and Engineering at Rensselaer, director of the Rensselaer Nanotechnology Center, and co-corresponding author on the study. “By learning more about the role of the nanostructure-protein interactions that cause this impact, we will be able in the future to harness this knowledge to benefit society through improved healthcare. In addition to improved healthcare, this work will also help enable the manufacture of a wide range of new hierarchical composite materials—based upon synthetic polymers, biomolecules, and nanostructures—that will revolutionize our ability to solve many critical problems facing society worldwide.”

What the researchers found in this and their previous studies was that the size and curvature of the nanosurface greatly changed the way proteins oriented themselves on the surfaces and changed their structure, and this influenced protein stability. They found that nanostructures with smaller and more curved surfaces favored protein orientations that resulted in more stable proteins than structures with larger more flat surfaces.

To reach these conclusions, the researchers investigated several well-studied proteins, including cytochrome c, RNase A, and lysozyme and monitored their adsorption on different size silica nanoparticles. In this latest work, they chemically modified the adsorbed proteins to form chemical “tags” that provided the researchers with important information on how the proteins adsorbed on different silica surfaces. When the nanomaterials and proteins were studied using mass spectrometry, the tags provided valuable new information about the surface orientation of the proteins. Mass spectrometry analyzes the mass distribution of a material to determine its elemental composition and structural characteristics, and was very sensitive to the chemical tags added on the proteins.

Dordick and Siegel were joined in the research by Siddhartha Shrivastava and Joseph Nuffer of Rensselaer. The research was funded by the National Science Foundation. The paper is titled “Position-specific chemical modification and quantitative proteomics disclose protein orientation absorbed on silica nanoparticles.”