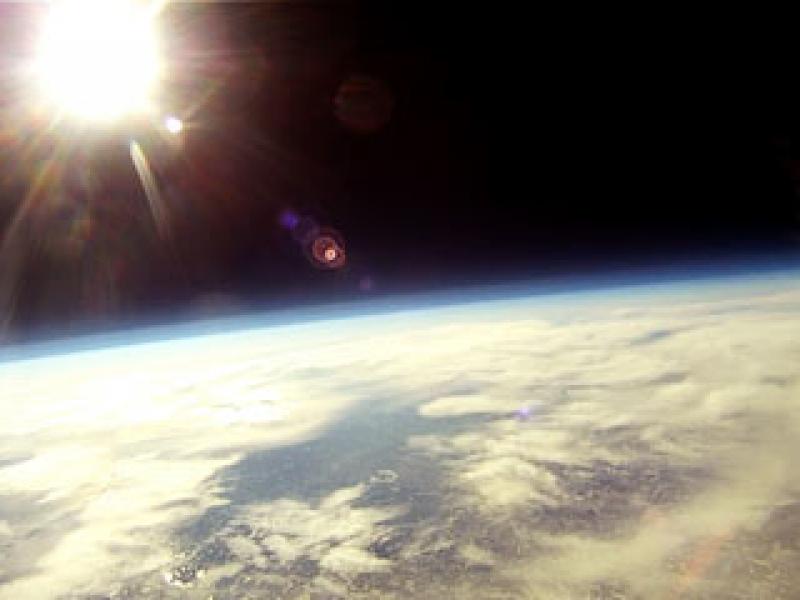 Members of a student club at Rensselaer Polytechnic Institute have created a unique 360-degree video chronicling a weather balloon’s 89,777-foot ascent into space.

The Rensselaer Students for the Exploration and Development of Space (SEDS) club launched their high-atmosphere balloon in late January. Filled with condensed helium, the balloon carried a payload of three high-definition video cameras and GPS equipment. SEDS members retrieved the payload—which was carefully designed to withstand a significant impact—after the balloon popped at its peak altitude and fell to the Earth’s surface. All three video cameras were intact, and club members “stitched together” footage from the three perspectives into a single 360-degree video.

The goal of the project, SEDS members said, was to create a video that would reach younger audiences and help rekindle their interest in space, science, and engineering.

“We see our video as an extraordinary opportunity to bring viewers face to face with the wonder of space,” said aerospace engineering major Orian Breaux, of Roselle Park, N.J., a recent graduate, member of the Class of 2012, and founder of SEDS at Rensselaer. “That curiosity has fallen out of public consciousness, and grassroots projects like these will help restore that spark among younger generations.”

“All of us on the team are passionate about space exploration, and we really channeled that energy into this project,” said electrical engineering major Greg Pitner, of Wappingers Falls, N.Y., also a member of the class of 2012. “The video gives a view of the horizon from the top of the atmosphere, which is as close as we can get—for now, at least—to actually experiencing what it’s like to be in space.”

See the full, unedited video from one of the cameras at: http://youtu.be/4PhwrW_KVAs

SEDS launched the balloon at 8:29 a.m. EST on Jan. 28 from the ’87 Field in the heart of the Rensselaer campus in Troy, N.Y. The students used GPS to track the progress of the balloon, which immediately sped up and east. At 9:16 a.m. and an altitude of 29,039 feet, the balloon hit a speed of 246 mph—its fastest speed of the voyage. At 11 a.m., miles above Lake Winnipesaukee, N.H., the balloon reached its peak altitude of 89,777 feet and popped.

The payload fell to the ground and eventually landed in Steep Falls, Maine—170 miles from Troy as the crow flies, or a 280-mile car ride. Despite a broken-down car, losing the keys to the backup car, and getting questioned by Maine law enforcement officials, the students found the payload stuck up a tree deep in a Maine forest. Upon retrieving it and a running few quick tests, they discovered the video cameras were undamaged and had captured the footage successfully.

“I never cease to be amazed by these students. They proposed the mission, they designed the system and the payload, they built it, and then flew it with absolute success,” said club faculty adviser Kurt Anderson, a professor in the Department of Mechanical, Aerospace, and Nuclear Engineering, and the associate dean for undergraduate studies. “At many institutions students too seldom take their ideas beyond concept and design on paper. Not so with this group. They have gone from ideas to execution, achieved through their own hard work and initiative. In so doing they have taken all of us the edge of space through the extraordinary images the craft returned. We should all be proud of what these students have accomplished.”

SEDS at Rensselaer is one of 36 college-based chapters of SEDS, an independent, student-based organization with a vision for a space-faring civilization. The organization is committed to fostering enthusiasm among young people as a key to humanity’s future in space.

For additional information on Rensselaer Students for the Exploration and Development of Space club, visit:

See local media coverage of the SEDS balloon launch at: