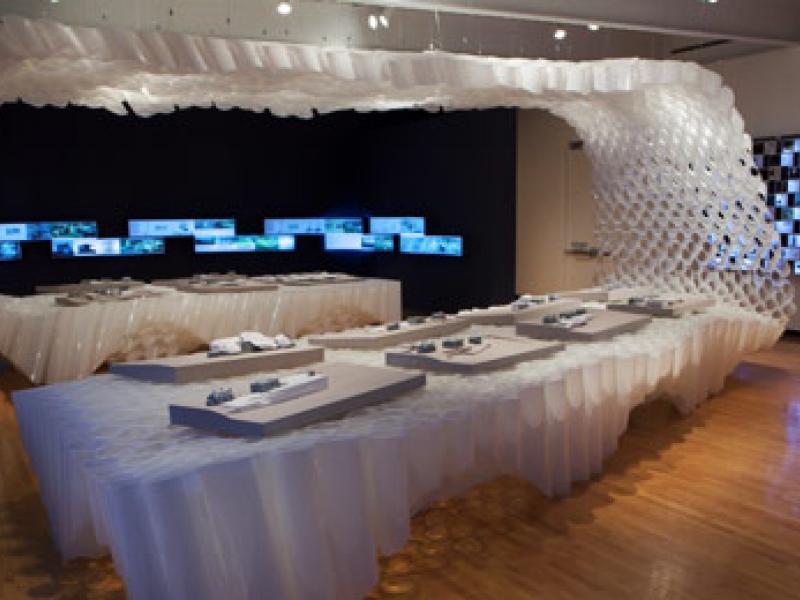 The Hyde Collection in Glens Falls is mounting an unusual exhibit, titled “Building Futures: Re-Envisioning the Hyde at Rensselaer.” The exhibit presents conceptual proposals for expanding the Hyde campus, designed by faculty and students of the Rensselaer School of Architecture.

Through April 15, the exhibit showcases faculty-led, student-developed ideas for expanding and unifying the disparate buildings and sprawling grounds of the Hyde campus. Six of the concepts were generated during an intensive two-day design “charrette” in September 2011. Sixteen proposals are the product of the semester-long second-year design studio held in the fall 2011, semester.

As an exercise in analysis, each student was asked to root his or her design in a piece from the collection, said Andrew Saunders, assistant professor of architecture at Rensselaer, and coordinator of the Hyde design studio.

“For the students, this is their introduction to analysis, which you can think of as design research,” Saunders said. “In a very simple way, it’s about being able to access thoughts and being able to analyze cultural artifacts beyond the literal. There’s a certain amount of interpretation; it’s not a formulaic process. It’s about understanding and building a discourse.”

Sophomore Erica Barrows analyzed “The Discovery of the True Cross,” a Renaissance painting by Jacopo Robusti (Tintoretto), which pictures Christ bearing the cross amid a crowd of onlookers.

“I really looked at the transitions between the figures in the painting. How all the main focus is on the centerpiece, and the people on the outside were watching him and orbiting around him,” Barrows said.

Saunders said the design studio was an opportunity for students to practice the concept of “affects”—an idea proposed by French philosopher Gilles Deleuze—in aesthetic analysis.

The students “mined” their painting for specific relationships of geometry, composition, materiality, lighting, color, nature, and the human body. The students then translated their “affects” through a series of drawing and modeling exercises, culminating in an architectural strategy for the Hyde campus.

From her analysis, Barrows isolated three “affects” related to the rotation of the figures, the movement of the fabric robes enveloping their bodies, and folding and splitting lines. She labeled her affects “unrestrained weaving by the materiality,” “rotational,” and “split-folding.”

“This studio was a huge eye opener - before, it was all abstract,” Barrows said. “I liked how we started with something so simple as a painting and looked at it, and made it into a module, and used that module to create a building that people can move around. It kind of opened my eyes to the idea that architecture can come from anything.”

Saunders said the sophomore design studio has become a vehicle for students to engage in their community’s cultural resources. The Hyde design studio follows on the heels of last year’s successful collaboration with the Lebanon, N.Y., Shaker Museum and Library.

“The Hyde collection is eclectic. It includes pieces from the Renaissance, Baroque, modern, contemporary - you get to see an evolution of art,” Saunders said. “By analyzing each piece for affects, we were able to approach the collection in a contemporary way.”

For more information, view the future exhibits page on the Hyde Collection website.

Related events at the Hyde Collection:

Event: Book Launch Date: Sunday, April 1, 2012. Time: To be determined. A 384-page book will document the students’ work. Available in the Museum Store.