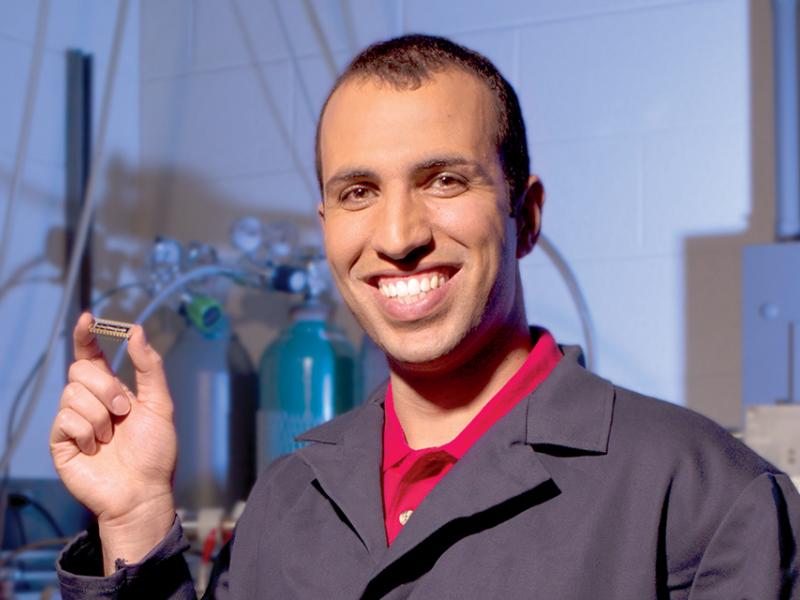 Fazel Yavari has developed a new sensor to detect extremely small quantities of hazardous gases. The Rensselaer Polytechnic Institute doctoral student harnessed the power of the world’s thinnest material, graphene, to create a device that is durable, inexpensive to make, and incredibly sensitive.

A student in the Department of Mechanical, Aerospace, and Nuclear Engineering at Rensselaer, Yavari’s sensor opens the door to a new generation of gas detectors for use by bomb squads, defense and law enforcement officials, as well as in industrial settings. For this innovation, Yavari has been named the winner of the 2012 $30,000 Lemelson-MIT Rensselaer Student Prize. He is among the three 2012 $30,000 Lemelson-MIT Collegiate Student Prize winners announced today.

“Innovating solutions to the challenges of tomorrow requires a certain kind of individual—one who is ready and willing to take calculated risks and seize promising opportunities. These architects of change push forward the state of the art, and can affect progress on a global scale,” said Rensselaer President Shirley Ann Jackson. “Fazel Yavari, with his creative exploitation of graphene to create a promising new gas sensor, is a stellar example of such an architect of change. We congratulate him, and applaud all of the winners and finalists of the Lemelson-MIT Collegiate Student Prize for innovating a bolder, brighter future.”

Yavari is the sixth recipient of the Lemelson-MIT Rensselaer Student Prize. First given in 2007, the prize is awarded annually to a Rensselaer senior or graduate student who has created or improved a product or process, applied a technology in a new way, redesigned a system, or demonstrated remarkable inventiveness in other ways.

“This year’s Lemelson-MIT Collegiate Student Prize winners and finalists from MIT, RPI, and UIUC are helping to fulfill the country’s need for innovation. These students’ passion for invention and their ideas will improve people’s lives around the world,” states Joshua Schuler, executive director of the Lemelson-MIT Program. “We applaud their accomplishments that will also undoubtedly inspire future generations of inventors.”

For videos and photos of Yavari and other award finalists, please visit: www.eng.rpi.edu/lemelson

Detecting trace amounts of hazardous gases present within air is a critical safety and health consideration in many different situations, from industrial manufacturing and chemical processing to bomb detection and environmental monitoring. Conventional gas sensors are either too bulky and expensive, which limits their use in many applications, or they are not sensitive enough to detect trace amounts of gases. Also, many commercial sensors require very high temperatures in order to adequately detect gases, and in turn require large amounts of power.

Researchers have long sought to leverage the power of nanomaterials for gas detection. Individual nanostructures like graphene, an atom-thick sheet of carbon atoms arranged like a nanoscale chicken-wire fence, are extremely sensitive to chemical changes. However, creating a device based on a single nanostructure is costly, highly complex, and the resulting devices are extremely fragile, prone to failure, and offer inconsistent readings.

Yavari has overcome these hurdles and created a device that combines the high sensitivity of a nanostructured material with the durability, low price, and ease of use of a macroscopic device. His new graphene foam sensor, about the size of a postage stamp and as thick as felt, works at room temperature, is considerably less expensive to make, and still very sensitive to tiny amounts of gases. The sensor works by reading the changes in the graphene foam’s electrical conductivity as it encounters gas particles and they stick to the foam’s surface. Another benefit of Yavari’s device is its ability to quickly and easily remove these stuck chemicals by applying a small electric current.

The new graphene foam sensor has been engineered to detect the gases ammonia and nitrogen dioxide, but can be configured to work with other gases as well. Ammonia detection is important as the gas is commonly used in industrial processes, and ammonia is a byproduct of several explosives. Nitrogen dioxide is also a byproduct of several explosives, as well as a closely monitored pollutant found in combustion exhaust and auto emissions. Yavari’s sensor can detect both gases in quantities as small as 0.5 parts-per-million at room temperature.

Determined Innovator and EngineerYavari joined Rensselaer in 2009 as a member of the research group of Nikhil Koratkar, professor of mechanical, aerospace, and nuclear engineering and materials science and engineering at Rensselaer. In his time at Rensselaer, Yavari has presented his findings at several international conferences, and he has been the author of several studies published in peer-reviewed journals including Nature Materials, Nano Letters, Scientific Reports, and Small.

“Fazel is among the most talented and skilled experimentalists of all the graduate students I’ve had the pleasure of working with,” said Koratkar, who is Yavari’s academic adviser. “He is extremely innovative, and has a proven ability to develop unique and creative solutions to the most vexing problems. I am very pleased, but not surprised, at his success in winning this outstanding recognition.”

Growing up in Isfahan, Iran, Yavari had an inquisitive mind and showed an early inclination for mathematics. His parents, both high school teachers, encouraged him to study math and science. They were tremendously pleased to see their son win the $30,000 Lemelson-MIT Rensselaer Student Prize.

After earning his doctoral degree from Rensselaer later this year, Yavari plans to continue conducting research in the field of nanomaterials and nanodevices either in academia or the private sector.

Jerome H. Lemelson, one of U.S. history’s most prolific inventors, and his wife, Dorothy, founded the Lemelson-MIT Program at the Massachusetts Institute of Technology in 1994. It is funded by The Lemelson Foundation and administered by the School of Engineering. The Foundation sparks, sustains, and celebrates innovation and the inventive spirit. It supports projects in the U.S. and developing countries that nurture innovators and unleash invention to advance economic, social, and environmentally sustainable development. To date The Lemelson Foundation has donated or committed more than U.S. $150 million in support of its mission. http://web.mit.edu/invent/

For more information on past winners of the $30,000 Lemelson-MIT Rensselaer Student Prize, visit: