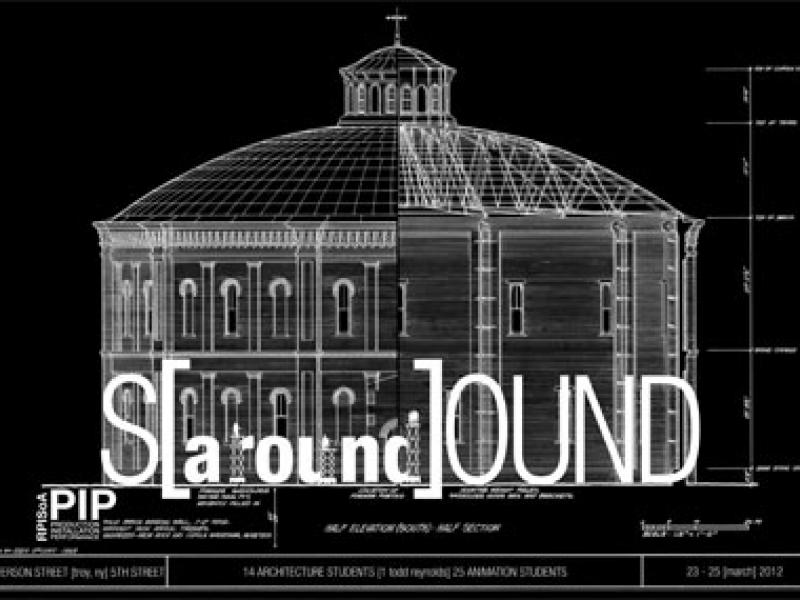 In the Production, Installation, and Performance (PIP) seminar at Rensselaer Polytechnic Institute, students of architecture and the arts design and build a performance set for a visiting artist. This year, the performance—with digital violinist Todd Reynolds—takes place in a cavernous mausoleum of the industrial age known around town as “the Gasholder Building.”

“The students have collaborated with Todd Reynolds to restore buoyancy and illumination to this significant example of Industrial Revolution-era American architecture,” Oatman said.

In the late 19th and early 20th century, the Gasholder Building housed a massive steel tank containing compressed coal gas to supply the city’s gas lights. The tank has long since been removed, and today the soaring 50-foot high interior holds only a surreal echo that resounds to the most minute sounds generated within its brick walls. Fourth-year architecture student Tyler Hopf said the class was immediately impressed with the space.

“Each sound echoes, and echoes in a different way—even footfalls in the dirt floor echo,” said Hopf. “In terms of the sound quality and the spatial quality, there are no other buildings around that can compare to it.”

Over the course of a semester, the students of architecture and the arts designed a set that builds on the strengths of the Gasholder Building and suits the style of Reynolds, a New York City-based digital violinist whose recent album “Outerborough” was named Amazon’s Best Classical release of 2011.

Reynolds, violinist, composer, educator, and technologist, is known as one of the founding fathers of the hybrid-musician movement and one of the most active and versatile proponents of what he calls “present music,” according to his website. The violinist of choice for Steve Reich, Meredith Monk, Bang on a Can, and a founder of the string quartet known as Ethel, his compositional and performance style is a hybrid of old and new technology, multidisciplinary aesthetic, and pan-genre composition and improvisation.

The students, working on a strict budget, designed a set that evolves as the performance unfolds. In the first stage of the performance, the audience will walk into the Gasholder Building to find the massive interior— a space that soars 50 feet to a trestle roof—obscured by a semi-circle of custom-built collapsible walls. As Reynolds concludes the first piece, the walls will fold to the ground, allowing viewers to move into the interior.

For the second stage of the performance, the students have built makeshift musical instruments by stringing a series of vertical iron support beams with piano wire, making it possible to “play” the building. The audience will be invited to explore the sounds that can be generated, and Reynolds will accompany.

The third stage will begin with a series of three enormous inflatable set pieces, lit and animated, which the audience can explore.

The performance concludes with a “surprise” in which Hopf said the audience and performer would be “interacting with one another and moving around one another.

“The whole idea is to challenge ideas of the barriers between the audience and performer,” Hopf said.

Hopf said the PIP class is a valuable opportunity. As an architecture student, Hopf said “it teaches us that there is a lot of architecture that’s beyond building a house or building an office building—architecture can be art.

“It’s also the only studio that has a built project. You have to manage it, manage the budget, work with the performer as a client,” Hopf said. “As a student, you create a lot of drawings and renderings, but you never get to see your stuff built. It’s extraordinary.”

Production, Installation, and Performance is supported by the Marcia and Chris Jaffe Foundation, which was established by internationally renowned acoustician Chris Jaffe ’49, who imagined a special course at Rensselaer around the idea of collaboration, architecture, and the performing arts.

“S(around)OUND” has received additional support from MAC Equipment Rentals in Troy and Sage Brothers Painting Company in Troy (which owns the Gasholder Building).