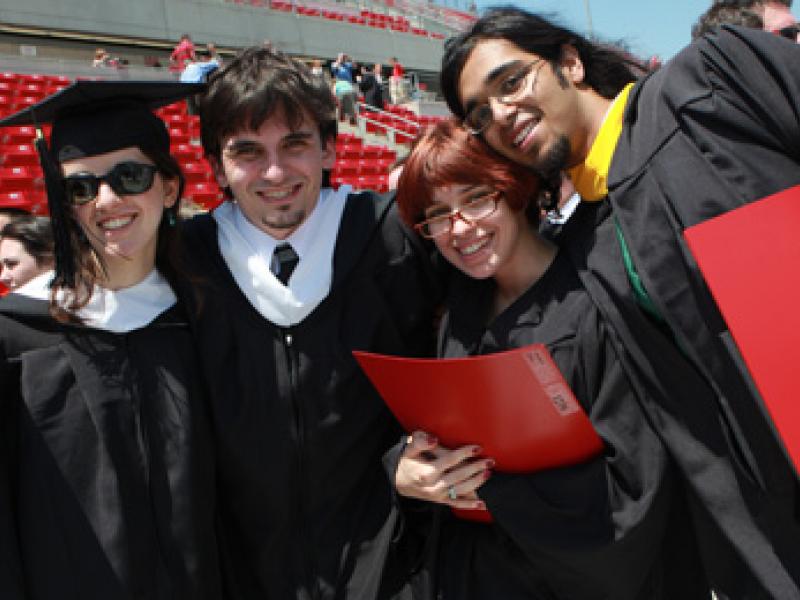 Barton J. Gordon—one of the nation’s leading bipartisan experts on innovation during his 26-year career in the U.S. House of Representatives—will deliver the main address at the 206th Rensselaer Polytechnic Institute Commencement here on May 26.

Gordon will receive an honorary degree, along with fellow honorands Antonin G. Scalia, Associate Justice of the U.S. Supreme Court; digital camera inventor and Rensselaer alumnus Steven J. Sasson ’72; and Edward A. Feigenbaum, a pioneer in the computer science field and professor emeritus at Stanford University.

“Better collaboration across sectors can accelerate the scientific discoveries and technological innovations at the core of the solutions to many of the great challenges and opportunities of our time,” Rensselaer Polytechnic Institute President Shirley Ann Jackson said.  “Congressman Gordon, Justice Scalia, Mr. Sasson, and Dr. Feigenbaum exemplify that cross-section of government, business, and academic leadership which comes to the fore in responding to and shaping our changing world.”

Before he announced that he would not seek re-election to his U.S. House of Representatives seat in Tennessee in 2010, Gordon had developed a reputation as a bipartisan leader in innovation policy in the House. He was elected to serve as chairman of the House Committee on Science and Technology in 2007, and served until 2010. During his tenure in the House he also served as a senior member of the House Committee on Energy and Commerce, and served on a number of other committees, including: Financial Services, Rules, Transatlantic Parliamentary Dialogue, and NATO Parliamentary Assembly.

During his chairmanship of Science and Technology, the committee passed 151 bills and resolutions, all of them bipartisan. In 2007, he championed the America COMPETES Act, signed into law by President George W. Bush, which promotes federal investments in innovation in order to make the U.S. more competitive. In 2010, as chairman of the Science and Technology Committee, he engineered the passage of the America COMPETES Reauthorization Act. Signed into law by President Barack Obama, the act renewed the federal commitment to R&D and education.

Gordon also played a key role in developing and passing the 21st Century Nanotechnology Research and Development Act, which encouraged the federal government to promote the transfer of nanotechnology breakthroughs from laboratories to commercial products. He also promoted legislation that would implement a research program focusing on the environmental, health, and safety aspects of nanotechnology.

Throughout his political career, Gordon led the debate on a wide range of technology issues and formulated legislative initiatives on a number of other subjects, including health information technology,  nuclear power, rare earth minerals, and synthetic biotechnology. He also led the effort to enact the Energy Independence and Security Act of 2007, which increased mileage standards, improved vehicle technology, promoted alternative energy research, and improved energy efficiency in a variety of ways. Gordon was also a leading proponent of America’s space program, and of improving the nation’s performance in science, technology, engineering, and mathematics (STEM) education.

Born in Murfreesboro, Tenn., Gordon served in the U.S. Army Reserve and graduated from Middle Tennessee State University with a bachelor’s degree in 1971. He went on to earn a law degree from the University of Tennessee in 1973. After serving as state Democratic Party chairman from 1981 until 1983 and working in a private law practice, he was elected to the U.S. House in 1984, and won re-election for 13 terms.

Today, Gordon is a partner in the K&L Gates law firm in Washington, D.C.

He was chairman of the American Bar Association’s Section of Administrative Law from 1981 until 1982, and its Conference of Section Chairmen between 1982 and 1983. He served the Federal Government as General Counsel of the Office of Telecommunications Policy from 1971 until 1972, chairman of the Administrative Conference of the United States from 1972 to 1974, and Assistant Attorney General for the Office of Legal Counsel from 1974 to 1977. He was appointed Judge of the United States Court of Appeals for the District of Columbia Circuit in 1982.

President Reagan nominated him as an Associate Justice of the Supreme Court, and he took his seat Sept. 26, 1986.

After graduation, Sasson joined Eastman Kodak as an electrical engineer, working in an applied research laboratory. He engaged in a number of early digital imaging projects. Among these was the design and construction of the first digital still camera and playback system in 1975. He continued to work throughout the 1980s in the emerging field of digital photography, receiving 10 key digital imaging patents. In 1989 he led the development of the first prototype megapixel electronic digital camera utilizing DCT compression that stored images to flash memory cards. Sasson continued his work throughout the 1990s by developing one of the first photographic quality thermal printing systems, derivatives of which are still in use in self-service imaging kiosks around the world today. Before retiring in 2009, Sasson was a project manager in the Intellectual Property Transactions group at Kodak.

During his career, Sasson won a number of awards, including: the National Medal of Technology and Innovation in 2009, induction into the National Inventors Hall of Fame in 2011, an Honorary Doctor of Science from the University of Rochester in 2009, induction into the Rensselaer Polytechnic Institute Alumni Hall of Fame in 2011, and the Davies Medal for Engineering Achievement from Rensselaer in 2011.

Feigenbaum biographyBorn in Weehawken, N.J., Feigenbaum is Kumagai Professor of Computer Science Emeritus at Stanford University. He earned his Ph.D. at Carnegie Institute of Technology (now Carnegie Mellon University), in 1959. In the 1960s he pioneered the development of the Expert Systems field. From 1976 to 1981, he was chairman of the Stanford Computer Science Department.  In the 1980s, he participated in the start up of several companies that commercialized expert systems technology. During 1994 until 1997, he was Chief Scientist of the U.S. Air Force at the Pentagon.

In 1963, he co-edited the early anthology, Computers and Thought. In the 1980s he co-edited the four-volume Handbook of Artificial Intelligence, and coauthored two books about AI and expert systems:  The Fifth Generation; and The Rise of the Expert Company.  His recent book, The Japanese Entrepreneur: Making the Desert Bloom, was published in a Japanese edition.

President Jackson To Lead May 25 Colloquy with the 2012 Honorands: “Honoring Tradition, Responding to a Changing World”On the eve of Commencement, Rensselaer will convene for the 2012 President’s Commencement Colloquy. The honorands will participate in a discussion – titled  “Honoring Tradition, Responding to A Changing World” – led by President Jackson. The Colloquy, open to the Rensselaer community and the general public, will be held in the Concert Hall of the Curtis R. Priem Experimental Media and Performing Arts Center (EMPAC), on the Rensselaer campus, beginning at 4 p.m. on Friday, May 25.

For more details on Commencement, go to www.rpi.edu/academics/commencement/index.html.