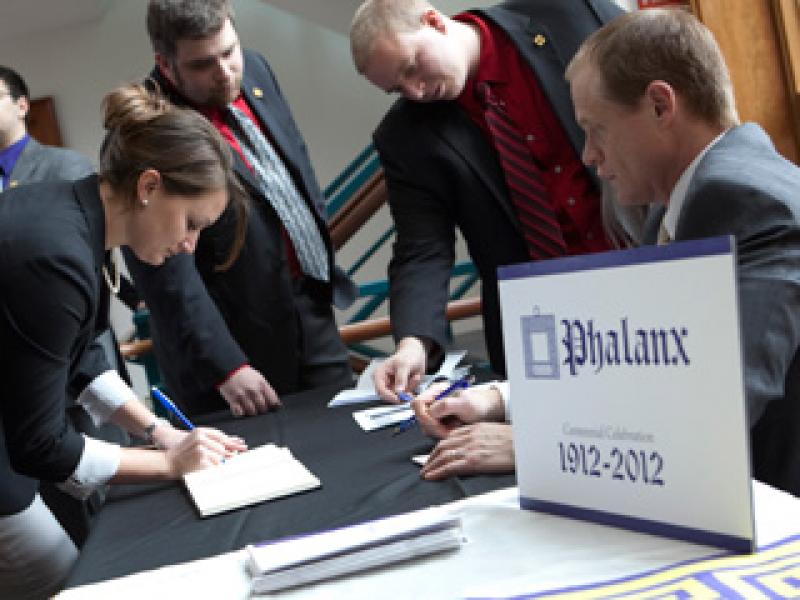 Celebrating 100 Years of Student Leadership, Service, and Devotion to Rensselaer and the Community

Twenty-five students have been inducted into the Rensselaer Polytechnic Institute Phalanx Honor Society for 2012. Phalanx honors student leadership, service, and devotion to the university, and celebrates those who have “worked to better the standing of Rensselaer both on and off campus.” New members are selected—or tapped—by the student members of Phalanx.

In remarks to the 2012 inductees and Phalanx alumni/ae shared during the recent centennial dinner celebration, Rensselaer President Shirley Ann Jackson noted that Phalanx was the brainchild of the 1912 Rensselaer Student Council. “Its members realized that the best way to promote a rich extracurricular life on campus was to honor those who showed the most leadership in such activities. In other words, that long-ago Student Council understood the power of example,” President Jackson said. “Today, the Phalanx Society still sets the standard, leading the Rensselaer campuses into the 21st century and showing us all what is possible, if one is only idealistic and energetic enough.”

In addition, 19 students were inducted into the White Key Society, the junior honor society, for the promise they have shown as leaders as freshmen and sophomores.

“We congratulate our new Phalanx members and White Keys, and express our indebtedness to them for the many ways they serve Rensselaer and the larger community around us,” President Jackson said in her remarks delivered during the official tapping ceremony. “At the same time, we incur another debt, because we are asking them—indeed, counting on them—to be role models for our student body as a whole.”

“As a group, they have elevated the reputation of Rensselaer and shown us the way forward into the future,” President Jackson added. “The inductees have distinguished themselves in activities that range from volleyball, to tennis, to assisting local high schools, to RPI TV. A number of our inductees are prominent in Greek Life at Rensselaer. These fraternity and sorority members are among the most civic-minded people in the city of Troy. They are the kind of neighbors for which any sensible person fervently wishes, joining local community organizations and energetically performing community services. They do as much to bridge the town/gown divide as any students on the Troy campus. For that, I am extremely grateful.”

President Jackson also noted that one inductee, a graduate student, has been an extraordinary mentor to international students coming to Rensselaer, while other inductees belong to a group of Rensselaer students that has made a contribution to energy security. The inductees include athletes, musicians, and politicians, as well as organizers—“those intrepid managers able to put together our Winter Carnival, or the Relay for Life cancer fundraiser, or UPAC concerts.”

Kyle Mattson, president of Phalanx, and Andrew Stevens, vice president, presided over the March 31 tapping ceremony, which was attended by Phalanx members, family and friends of the inductees, alumni/ae, and others from the Rensselaer community. Bimal Malaviya, professor in the department of mechanical, aerospace, and nuclear engineering, gave the annual Darrin Address. Malaviya was the winner of the 2011 David M. Darrin Counseling Award, which is presented annually by Phalanx during Commencement.

“Phalanx and the White Key Honor Society are slowly rising up in awareness as more students every year learn that there are ways for them to recognize their peers while meeting obstacles along the way,” said Mattson.

“However, I feel we are adapting to them and facing them head on to create a better community for Rensselaer,” Mattson added. “The centennial marks the persistence of our student body and their determination to continue to honor their peers. I see Phalanx becoming more of what it once was, a way to connect all aspects of student life to continually improve our great Institute for the future graduates. I am pleased to be able to graduate with the organization returning to its original goals.”

“It does not matter what brand of leadership you might show—and the leadership demonstrated by Phalanx members ranges from the political, to the creative, to the rhetorical, to the athletic, to the philanthropic,” President Jackson said. “What matters today is the ease with which it is possible for young leaders to gather support for their ideas, as the Internet allows any call to action to be heard around the globe.”

President Jackson also noted that one inductee, a graduate student, has been an extraordinary mentor to international students coming to Rensselaer, while other inductees belong to a group of Rensselaer students that has made a contribution to energy security. The inductees include athletes, musicians, and politicians, as well as organizers—“those intrepid managers able to put together our Winter Carnival, or the Relay for Life cancer fundraiser, or UPAC concerts.”

“We must celebrate the fact that today’s Phalanx members have more than their own innate courage and creativity at their disposal: They also have truly remarkable tools,” President Jackson noted. “In 1912, when the Student Council founded Phalanx Honor Society, the expectation was that Phalanx students would make Rensselaer a better place. But today, given the power at their fingertips, when we honor Rensselaer’s young leaders, it is with the expectation that they truly are going to change the world in positive ways.”

The Phalanx Honor Society has always been a place for Rensselaer’s natural-born leaders, and many Phalanx alumni have gone on to distinguish themselves both in their careers and their communities, including former Rensselaer President George M. Low of the Class of 1948 and Dr. Don L. Anderson of the Class of 1955, both recipients of the National Medal of Science. Since Phalanx was established, 1,459 members have been named to the organization, along with 130 honorary members.

For more information about the Phalanx Honor Society, visit:  http://phalanx.union.rpi.edu/