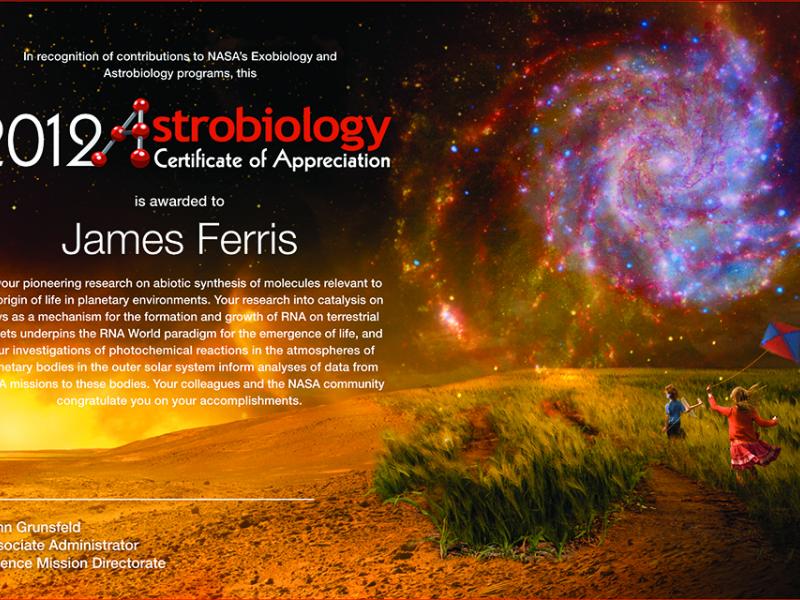 Students, mentees, and scientific collaborators of Rensselaer Polytechnic Institute Professor of Chemistry James Ferris gathered at a special session of the 2012 Astrobiology Science Conference in Atlanta, Ga., on April 19 to honor the scientist. The session titled “The Origin of Biomolecules in Planetary Environments: From HCN to RNA” was dedicated to Ferris for his seminal research into the origins of life on Earth and its potential to form on other planets.

The session was co-organized by Director of the New York Center for Astrobiology and Rensselaer Professor of Physics Douglas Whittet, and Research Assistant Professor and longtime colleague of Ferris’, Prakash Joshi. NASA also formally honored Ferris for his contributions at the session. Ferris remains an active member of the faculty at Rensselaer and the center, which is funded by NASA as part of the NASA Astrobiology Institute.

“We at NASA applaud Jim Ferris for his pioneering research on abiotic synthesis of molecules relevant to the origin of life,” said Carl Pilcher, director of the NASA Astrobiology Institute. “We are happy to have the opportunity to celebrate his accomplishments at this special session in his honor, in the presence of his many colleagues and former advisees.”

Ferris joined Rensselaer in 1967. During his more than 45 years on the faculty, he mentored countless students and researchers and wrote some of the most important papers on the origins of life. He was the director of the NASA-funded New York Center for Studies on the Origins of Life from 1998 to 2006. The center was an important predecessor to the current center at Rensselaer.

“Jim has been a role model for me ever since I first met him over 20 years ago,” Whittet said. “His example as a scientist and as a leader, and his success in obtaining NASA support for the first Origins of Life center at Rensselaer, were major influences on my career. His pre-eminence in the field was a prime factor in our successful bid for current membership of the NASA Astrobiology Institute.”

Ferris literally broke new ground in origins of life research with his discovery that long chains of RNA, a possible precursor to more sophisticated DNA life forms, can be created from simple organics in the presence of clay minerals and water. His research supports the still widely accepted hypothesis that life on the primitive Earth may have arisen from such simple chains of RNA. His research has further shown that these important macromolecules have strong catalytic properties in addition it their ability to store genetic information. In addition, he has also studied photochemical reactions occurring in the atmospheres around young planets and moons. In particular he has studied the atmospheres of Jupiter and Titan, the largest moon of Saturn, to provide clues on what the early atmosphere of Earth may have been like when life first arose on our planet.

Ferris received his bachelor’s degree from the University of Pennsylvania and doctorate from Indiana University. His postdoctoral studies were performed at MIT. Ferris joined Rensselaer in 1967 and in 1969 was awarded a NIH Career Award, which enabled him to expand the scope of his studies to research programs at the interface of chemistry and biology. He was named fellow of the AAAS in 1989. He served as editor of the journal Origins of Life and Evolution of the Biosphere for 18 years. In 1996 he was awarded the Oparin Medal of the International Society for the Study of the Origins of Life for his research on the origins of life. From 2000 through 2005, he served as chair of the National Academy of Sciences Task Force on Organic Environments in the Solar System.

The special session was chosen by the conference organizing committee for broadcast during the conference and will be archived and available for viewing on the web.

The conference is the fifth biennial Astrobiology Science Conference, held April 16-20 in Atlanta. It is the largest conference on astrobiology and brought together hundreds of scientists and experts to discuss topics ranging from Mars exploration to comets.