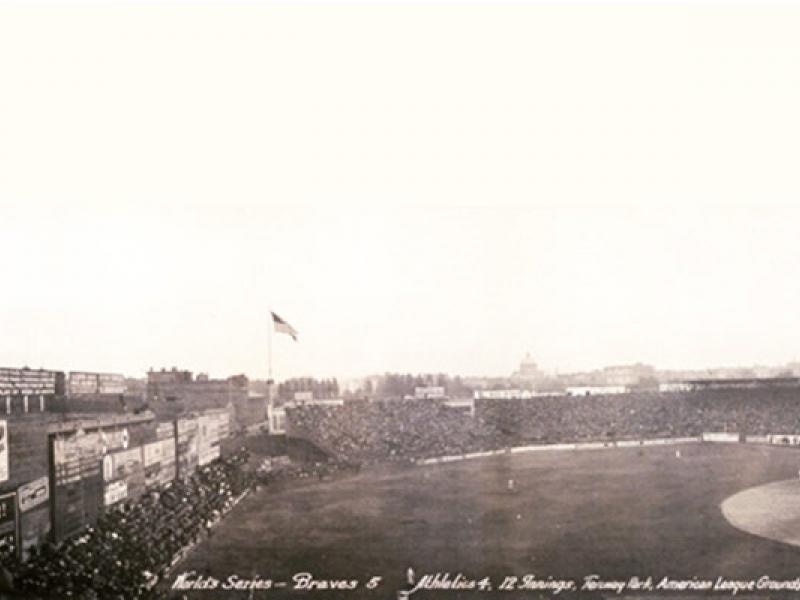 As Boston Red Sox and baseball fans prepare to celebrate the 100th anniversary of Fenway Park’s inaugural game on April 20, 1912, Rensselaer Polytechnic Institute is celebrating two alumni who played a key role in designing and building the storied ballpark.

In 1911, Osborn Engineering was among the team of contractors hired by the Red Sox organization to build the new ballpark in Boston’s Fenway neighborhood. Osborn Engineering helped design and built the park’s grandstand in steel and concrete. The company also built the cement foundation and reinforced steel columns of the park’s right field pavilion.

Osborn Engineering went on to become the nation’s foremost designer of large sports stadiums, and pioneers in the use of reinforced concrete and structural steel. In addition to Fenway Park, the company designed and built Sportsman’s Park in St. Louis in 1922, Yankee Stadium in 1923, Philadelphia Stadium in 1924, and Chicago White Sox home Comiskey Park in 1925. Other notable Osborn Engineering stadiums include those on the campuses of Purdue University, Oberlin College, and Notre Dame University.

The company played a significant role in the major renovations of Fenway Park in 1933 and 1934, under the leadership of Kenneth Osborn. A facelift of the stadium was already under way when a fire struck on Jan. 5, 1934, and ravaged most of the ballpark’s wooden features. As a result, the renovations grew in scale and ambition. The burned wooden stands along the outfield were replaced with concrete structures and extended to and married with the grandstand. Osborn Engineering designed and built the project, and their employees worked three shifts to finish in time for opening day. These renovations are considered to have created the look and feel that fans today identify with classic Fenway Park—the oldest Major League Baseball park still in use.

On April 28, Rensselaer will honor members of the Osborn family during an event at Fenway Park in Boston.

Frank and Kenneth Osborn are members of the Rensselaer Alumni Hall of Fame.

“We were extremely pleased to induct Frank and Kenneth Osborn into our Alumni Hall of Fame in 2007,” said Jeff Schanz, assistant vice president for alumni relations at Rensselaer. “They were entrepreneurs, innovators, opportunity recognizers, risk takers, and outstanding engineers. Their experience in structural steel and concrete enabled major cities and colleges alike to provide modern, safe stadiums for a new era of professional and collegiate athletics. They’re an inspiration to us all, and their legacy of excellence shines brightly on every Rensselaer student and alumnus.”