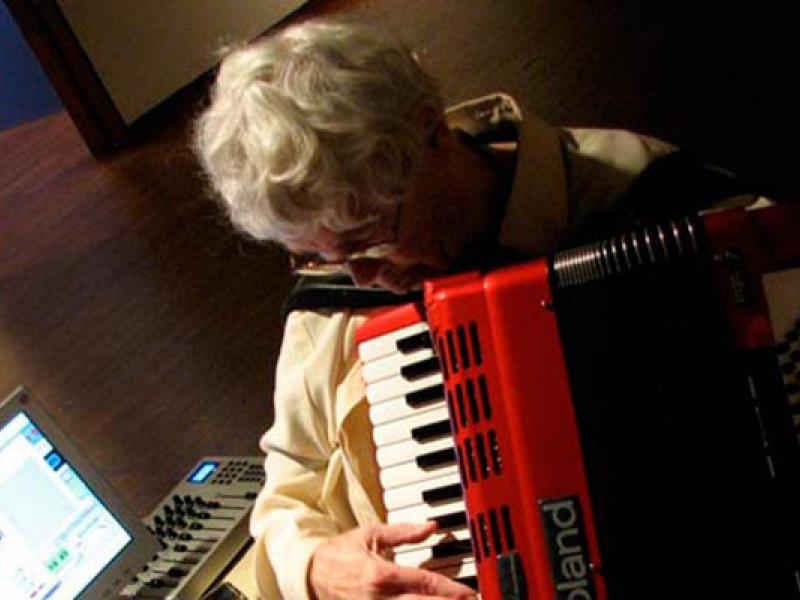 In 1988, musicians Pauline Oliveros, Stuart Dempster, and Panaiotis, with audio engineer Albert Swanson, descended into an unused cistern in the Pacific Northwest and created “Deep Listening,” an iconic recording released by New Albion (1989), and namesake of the concept for which Oliveros is best known today.

As an acoustic space, the cavernous cistern where the recording was made is remarkable for its smooth frequency response, lack of distant echoes, and, most notably, a long reverberation of 45 seconds at low frequencies.

In celebration of Oliveros’ 80th birthday, the Curtis R. Priem Experimental Media and Performing Arts Center (EMPAC) at Rensselaer Polytechnic Institute is hosting an exceptional concert on May 10 that will feature a digital simulation of the acoustics within the cistern, made possible with software developed by Rensselaer professor and acoustic architect Jonas Braasch. This event will feature a reception with nine birthday cakes, and every member of the audience will receive a free copy of the new DVD with the video of the joint concert by Oliveros and Cecil Taylor at the opening festival of EMPAC in 2008.

“Our dream after that first experience recording in the cistern was to take the cistern into the concert hall,” said Oliveros, celebrated forerunner of electronic music, founder of the Deep Listening Institute, and a Rensselaer professor of practice in Department of the Arts. “Now 24 years later, the Deep Listening Band is very excited to have that dream come true.”

Oliveros turned to Braasch, director of the Communication Acoustics and Aural Architecture Research Laboratory (CA^3 RL) at Rensselaer, and his team to develop software that will simulate the acoustics of the cistern for two performances.

"Coming to this concert will allow us to share with Pauline her generosity and her dedication to our often-buried potential to listen truly and deeply ­to the music, to ourselves, and to one another. Would this not be the real core of education?” said Johannes Goebel, EMPAC director.

Guests at EMPAC are also invited to view the process as Jonas Braasch and Pauline Oliveros prepare for the evening performance.

The Fort Worden Cistern, since renamed the Dan Harpole Cistern, is a cavernous cylinder built in 1907 on a former Army base in Port Townsend, Wash. The cistern is 186 feet in diameter, made of reinforced concrete, with more pillars per square yard than a skyscraper. It was built to hold two million gallons of water and to withstand bombing.

Because the cistern is not well suited as a live concert venue—it is only accessible by a small manhole—even a few audience members would significantly reduce the characteristic reverberation time—new technology will simulate the cistern acoustics.

“The goal of the simulation was to bring the cistern to a larger audience so people can experience this iconic space live in its full immersion,” Braasch said. “Live concerts with a sizable audience are not possible in the real cistern because of accessibility and the fact that many people would absorb the characteristic sound of this unique space.”

Here’s how it will be done:

An electroacoustic system with 32 loudspeakers will simulate the sound of the cistern in the EMPAC concert hall and the Winter Garden.

Multi-channel impulse responses of the cistern (the echo footprint) will be rendered using a CAD model of the cistern. Various source/receiver positions are considered, including those with special characteristics (e.g., flutter echoes).

Using a combination of close-microphone techniques and additional room microphones on stage, the instruments of the Deep Listening Band will be captured, convolved, and auralized with the simulated impulse responses. The levels of direct and reverberant sounds will be calibrated to receive the authentic sound of the cistern.

Oliveros’ life as a composer, performer, and humanitarian is about opening her own and others’ senses to the many facets of sound. Since the 1960s, she has profoundly influenced American music through her work with improvisation, meditation, electronic music, myth, and ritual. Many credit her with being the founder of present day meditative music. All of Oliveros’ work emphasizes musicianship, attention strategies, and improvisational skills. In March, Oliveros was honored with the John Cage Award, which is made in recognition of outstanding achievement in the arts for work that reflects the spirit of composer John Cage.

She has been celebrated worldwide. During the 1960s, John Rockwell named her work Bye Bye Butterfly as one of the most significant of that decade. In the 1970s she represented the United States at the World’s Fair in Osaka, Japan; during the 1980s she was honored with a retrospective at the John F. Kennedy Center for the Performing Arts in Washington. The 1990s began with a letter of distinction from the American Music Center presented at Lincoln Center in New York, and in 2000 the 50th anniversary of her work was celebrated with the commissioning and performance of her Lunar Opera: Deep Listening For_tunes.

Oliveros’ work is available on numerous recordings produced by companies internationally. Sounding the Margins—a forty-year retrospective, will be released soon in a six CD box set from Deep Listening.

with Ade Knowles and the Congeras, Richard Albagli, the Rensselaer Percussion Ensemble

Will perform as part of the Bang on a Can All-Stars’ annual marathon, time TBA