Bringing a Piece of History Back To Life in Downtown Troy 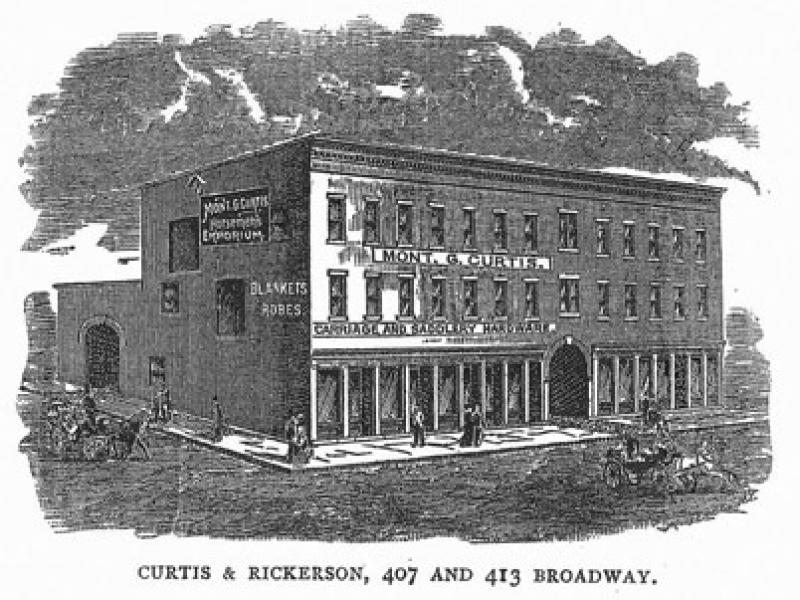 Bringing a Piece of History Back To Life in Downtown Troy

Beginning in the mid 1800s, the Chasan Building at the intersection of Fourth Street and Broadway served as the site for an iron storehouse, a public school, and a series of light industrial ventures before the building was used for commercial and retail businesses in the early 20th century. Today, after more than 150 years of residing on an architecturally diverse streetscape in the center of the City of Troy’s historic district, Rensselaer Polytechnic Institute and Columbia Development Companies held a ribbon cutting to unveil the project that has converted the Chasan Building into office space for the Rensselaer Institute Advancement team.

“The Institute is a committed, long-term partner in the revitalization of downtown Troy,” said Rensselaer President Shirley Ann Jackson. “The adaptive re-use of the Chasan Building is an important step in continuing the renaissance of downtown Troy – a renaissance that the university is proud to help catalyze. As leaders seek new economic development opportunities across the state and the Capital Region, we rely on creative public-private partnerships, as exemplified by this collaboration among Rensselaer, the City of Troy, New York state, and Columbia Development.”

The Chasan Building serves as an excellent example of the Greek Revival style, and has managed to retain its integrity of location, setting, association, materials, workmanship, feeling, and design. In addition, Chasan is a contributing building in the Central Troy Historic District that was listed on the National Register of Historic Places in 1986.  The district is architecturally and historically significant as a large and substantially intact historic urban center.

The overall project cost was approximately $6 million, including a $1.2 million Restore New York grant from the Empire State Development.

The building underwent a complete renovation and modernization, including a new roof, historic replica windows, restored exterior masonry, and the reconstruction of the original circa 1850 arched carriageway opening that will serve as the new main entrance to the building. In addition, the former high bay manufacturing space of the original saddlery operation in the building is reborn as a two-story interior courtyard, flooded with light from a skylight, connecting formerly landlocked spaces to natural light.

Throughout the reconfigured interiors, original brick walls with graceful, existing arches and newly cased openings combine with new partitions to complete the new office environment. Historic detail of the casings and running trim, and soft colors selected from the historic paint palette, complete the interior environment, keeping the historic context of the Chasan Building intact. The third floor lobby displays an original 1850 hardwood floor repaired and refinished to complete the historic feel underfoot.

In commemorating the opening of the newly renovated building, Rensselaer President Jackson was joined by local and state officials, area business leaders, members of the Rensselaer campus community,  and representatives from the project development team, including Columbia Development Companies, BBL Construction, and the architectural firm Woodward Connor Gilllies & Seleman.

“This has been a project that I’ve been extremely excited about and one that will result in long-lasting benefits for downtown Troy,” Mayor Lou Rosamilia said. “The Chasan Building is in the heart of our City, and I am thrilled that it has been reborn as a state-of-the art facility that preserves the historic character which makes Troy special. I thank President Jackson and her team at Rensselaer for the time, energy, and resources it took to complete this landmark initiative. It demonstrates Rensselaer’s commitment to our community and the shared vision we all have to move our City forward.”

Rensselaer will become the sole tenant of Chasan. Rensselaer will lease the building and relocate the Institute Advancement team from its current location in the Hedley Building to Chasan to handle expected growth in that organization, bringing about 72 employees into the heart of downtown Troy.

“ESD is proud to have played a part in the transformation of the historic Chasan Building,” said Empire State Development Capital Region Regional Director Peter Wohl. “What was a vacant and unused property in the heart of Troy for three decades is now a shining example of what can be accomplished through innovative and strong public-private partnerships, a cornerstone of Governor Cuomo’s economic development blueprint. We congratulate RPI on Chasan’s grand opening and look forward to continuing to build on our local assets to drive economic growth and revitalize our communities.”

“Columbia Development is committed to helping redevelop, in a responsible manner, the historic fabric of Troy,” said Joe Nicolla ’79, a partner in Columbia Development Companies. “This project is especially gratifying to several of our project team including Tom Keaney, Columbia Development, Kevin Gleason, BBL Construction Services, and Kurt Woodward and Greg Seleman, Woodward Connor Gillies & Seleman Architects, as we are all graduates of RPI and are privileged to be working with our prestigious alma mater. This project continues our commitment to the redevelopment of Troy as we finish our fifth project in approximately five years, with expenditures in excess of $80 million.”

According to historical resources, the location of the Chasan Building has been occupied by an iron store house and office in the mid 1880s, by Public School #3 in the early 1900s, and by stores and a club room between the 1950s and the 1980s. The building was occupied by the Albany Saving Bank, a wine and liquor store, and Troy Uniform between 1980 and 1995. Rensselaer took ownership of the building in 2002.

Rensselaer’s tenancy in Chasan is the latest in a long series of actions by the university to help bring about the renaissance of downtown Troy. Since 2000, Rensselaer has brought nearly 200 employees into downtown Troy to work at the Hedley, Rice, and Gurley buildings — paying nearly $1 million annually in rent.

Through an innovative public-private redevelopment strategy that also included Columbia Development, in 2009 Blitman Residence Commons opened as the newest housing option for Rensselaer undergraduates. This $15 million project brought nearly 200 students to the Sixth Avenue corridor to be housed at Blitman. Last fall, the university celebrated the United Companies’ opening of the $13 million College Suites at the City Station retail and apartment complex, which also include BBL Construction, on Sixth Avenue between Congress and Ferry Streets. This 184-bed complex houses Rensselaer graduate students.  Together, the projects including Chasan represent a $34 million investment in downtown Troy.