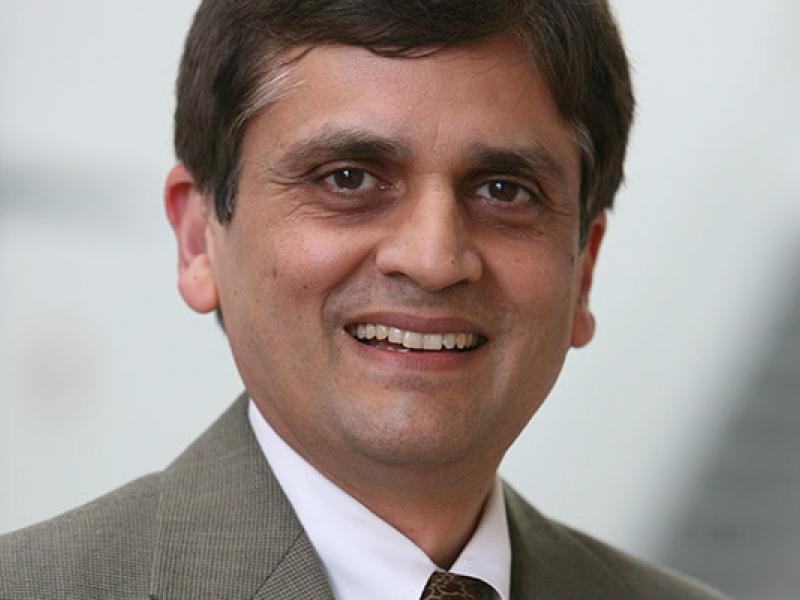 Hajela Joined Rensselaer in 1990 and Served in a Number of Roles, Including Acting Provost Since Jan. 1

Dr. Prabhat Hajela, an experienced academic and administrative leader, has been appointed provost of Rensselaer Polytechnic Institute, effective July 1, 2012, it has been announced by Rensselaer President Shirley Ann Jackson. A professor of aerospace engineering and vice provost at Rensselaer, Hajela has served as acting provost since Jan. 1, 2012.

“Following an international search, Dr. Hajela emerged as the leading candidate among an exceptionally strong pool of candidates for the position,” Jackson said. “He brings to the position a wealth of experience as a leader in teaching, research, administration, and faculty governance gained during his distinguished career in higher education. Since joining Rensselaer in 1990, he has touched the lives of generations of students and given guidance to scores of faculty members through his work as an academic and administrative leader. This experience will serve him well in his new position.”

“This is an exciting and transformational period for higher education,” Hajela said. “New modes of communication have redefined the landscape, offering enhanced connectivity and access to education for millions of individuals on an unprecedented global scale. Building on a storied tradition of innovation in teaching and research, Rensselaer will lead with transformational changes in its research and learning environment.”

As vice provost since 2005, Hajela has been instrumental in helping Rensselaer maintain its leadership position in undergraduate education. Under the auspices of the Undergraduate Plan, he led the expansion of undergraduate research programs, developed several new study abroad and international experience opportunities, and created the framework for living and learning communities. He collaborated closely with the Office of Student Life in the implementation of the Clustered Learning, Advocacy, and Support for Students (CLASS) program.

“We have set ambitious goals as we seek to attract and retain the very best faculty across the range of existing and emerging fields represented at Rensselaer, and to further enhance our research and learning environment as we continue to evolve as a technological research university of global reach and global impact,” she said.

Hajela's administrative mandate has included oversight of all undergraduate programs at the Institute, including engaging the five academic schools in program development and implementation. He has supported activities related to the operation of the academic enterprise, including summer and outreach programs, international programs, academic support of all students, learning outcomes assessment, promoting pedagogical advances, and helping identify infrastructure development priorities as related to instructional needs at the Institute. He has provided management to the Advising and Learning Assistance Center, Office of International Programs, Office of Research and Innovation in Teaching and Learning, Summer and Academic Outreach programs, and the ROTC programs.

An expert in complex system analysis and design in the presence of uncertainty, Hajela has published over 270 papers and articles in the areas of structural and multidisciplinary optimization, and is an author/editor of four books in these areas. He has held editorial assignments and serves on the editorial boards of several international journals. He has conducted research at NASA's Langley and Glenn Research Centers, and at the Eglin Air Force Armament Laboratory. He also worked at the Boeing Company as the Boeing-A.D. Welliver Fellow in 1995.

Hajela has been active in several national and international organizations. He is a past vice president of the International Society of Structural and Multidisciplinary Optimization, and a past chair of the American Society of Mechanical Engineers’ (ASME) Aerospace Division, an organization that serves over 15,000 ASME members with interest in aerospace engineering. In 2003, he served as a Congressional Fellow responsible for Science and Technology Policy in the Office of U.S. Senator Conrad Burns (R-MT). He worked on several legislative issues related to aerospace and telecommunications policy, including the anti-SPAM legislation (CAN-SPAM) that was signed into law in December 2003. He has served on different National Academies panels related to aerospace and aviation research, including the first Decadal Survey of Aeronautics.

Hajela received his undergraduate degree (with distinction) in 1977 from the Indian Institute of Technology, Kanpur. He received master's degrees in aerospace engineering from Iowa State University (1979) and in mechanical engineering from Stanford University (1981). He was awarded his Ph.D. in aeronautics and astronautics from Stanford University in 1982 and did postdoctoral training at the University of California, Los Angeles, before joining the University of Florida as a faculty member in 1983, where he was promoted to the rank of associate professor in 1987.

1990 and was promoted to full professor in 1992. He served as president and chair of the prior Faculty Senate from 1999 to 2002, and was appointed vice provost in 2005. He also served as administrative dean of the School of Humanities, Arts, and Social Sciences during the 2010-11 academic year.