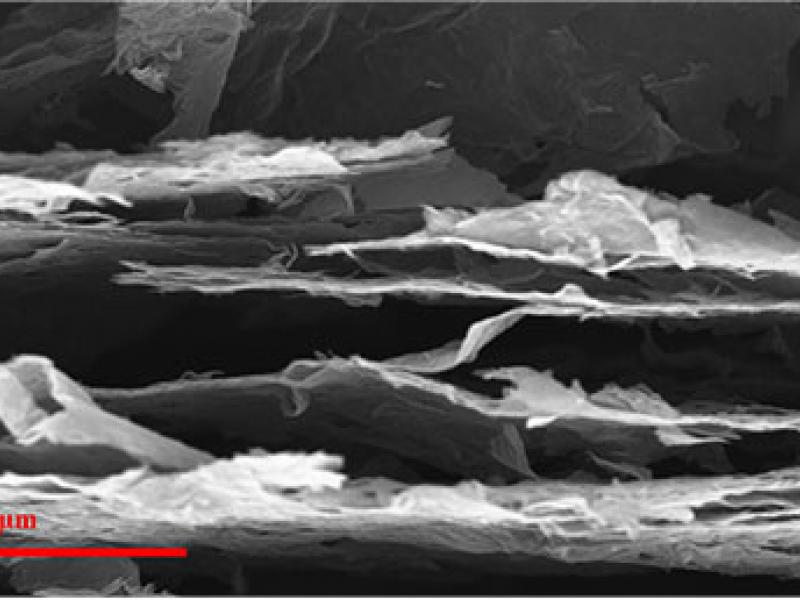 Engineering researchers at Rensselaer Polytechnic Institute made a sheet of paper from the world’s thinnest material, graphene, and then zapped the paper with a laser or camera flash to blemish it with countless cracks, pores, and other imperfections. The result is a graphene anode material that can be charged or discharged 10 times faster than conventional graphite anodes used in today’s lithium (Li)-ion batteries.

Rechargeable Li-ion batteries are the industry standard for mobile phones, laptop and tablet computers, electric cars, and a range of other devices. While Li-ion batteries have a high energy density and can store large amounts of energy, they suffer from a low power density and are unable to quickly accept or discharge energy. This low power density is why it takes about an hour to charge your mobile phone or laptop battery, and why electric automobile engines cannot rely on batteries alone and require a supercapacitor for high-power functions such as acceleration and braking.

The Rensselaer research team, led by nanomaterials expert Nikhil Koratkar, sought to solve this problem and create a new battery that could hold large amounts of energy but also quickly accept and release this energy. Such an innovation could alleviate the need for the complex pairing of Li-ion batteries and supercapacitors in electric cars, and lead to simpler, better-performing automotive engines based solely on high-energy, high-power Li-ion batteries. Koratkar and his team are confident their new battery, created by intentionally engineering defects in graphene, is a critical stepping stone on the path to realizing this grand goal. Such batteries could also significantly shorten the time it takes to charge portable electronic devices from phones and laptops to medical devices used by paramedics and first responders.

“Li-ion battery technology is magnificent, but truly hampered by its limited power density and its inability to quickly accept or discharge large amounts of energy. By using our defect-engineered graphene paper in the battery architecture, I think we can help overcome this limitation,” said Koratkar, the John A. Clark and Edward T. Crossan Professor of Engineering at Rensselaer. “We believe this discovery is ripe for commercialization, and can make a significant impact on the development of new batteries and electrical systems for electric automobiles and portable electronics applications.”

Results of the study were published this week by the journal ACS Nano in the paper “Photo-thermally reduced graphene as high power anodes for lithium ion batteries.” See the paper online at: http://pubs.acs.org/doi/abs/10.1021/nn303145j

Koratkar and his team started investigating graphene as a possible replacement for the graphite used as the anode material in today’s Li-ion batteries. Essentially a single layer of the graphite found commonly in our pencils or the charcoal we burn on our barbeques, graphene is an atom-thick sheet of carbon atoms arranged like a nanoscale chicken-wire fence. In previous studies, Li-ion batteries with graphite anodes exhibited good energy density but low power density, meaning they could not charge or discharge quickly. This slow charging and discharging was because lithium ions could only physically enter or exit the battery’s graphite anode from the edges, and slowly work their way across the length of the individual layers of graphene.

Koratkar’s solution was to use a known technique to create a large sheet of graphene oxide paper. This paper is about the thickness of a piece of everyday printer paper, and can be made nearly any size or shape. The research team then exposed some of the graphene oxide paper to a laser, and other samples of the paper were exposed to a simple flash from a digital camera. In both instances, the heat from the laser or photoflash literally caused mini-explosions throughout the paper, as the oxygen atoms in graphene oxide were violently expelled from the structure. The aftermath of this oxygen exodus was sheets of graphene pockmarked with countless cracks, pores, voids, and other blemishes. The pressure created by the escaping oxygen also prompted the graphene paper to expand five-fold in thickness, creating large voids between the individual graphene sheets.

The researchers quickly learned this damaged graphene paper performed remarkably well as an anode for a Li-ion battery. Whereas before the lithium ions slowly traversed the full length of graphene sheets to charge or discharge, the ions now used the cracks and pores as shortcuts to move quickly into or out of the graphene—greatly increasing the battery’s overall power density. Koratkar’s team demonstrated how their experimental anode material could charge or discharge 10 times faster than conventional anodes in Li-ion batteries without incurring a significant loss in its energy density. Despite the countless microscale pores, cracks, and voids that are ubiquitous throughout the structure, the graphene paper anode is remarkably robust, and continued to perform successfully even after more than 1,000 charge/discharge cycles. The high electrical conductivity of the graphene sheets also enabled efficient electron transport in the anode, which is another necessary property for high-power applications.

Koratkar said the process of making these new graphene paper anodes for Li-ion batteries can easily be scaled up to suit the needs of industry. The graphene paper can be made in essentially any size and shape, and the photo-thermal exposure by laser or camera flashes is an easy and inexpensive process to replicate. The researchers have filed for patent protection for their discovery. The next step for this research project is to pair the graphene anode material with a high-power cathode material to construct a full battery.

Along with Koratkar, co-authors of the paper are Rensselaer graduate students Rahul Mukherjee, Abhay Varghese Thomas, and Ajay Krishnamurthy, all of the Department of Mechanical, Aerospace, and Nuclear Engineering (MANE).

The study was funded by the National Science Foundation, and supported by Koratkar’s John A. Clark and Edward T.Crossan Endowed Chair Professorship at Rensselaer.

Koratkar is a professor in MANE and the Department of Materials Science and Engineering at Rensselaer. He is also a faculty member of the university’s Center for Future Energy Systems and the Rensselaer Nanotechnology Center.

For more information on the Koratkar’s research at Rensselaer, visit: