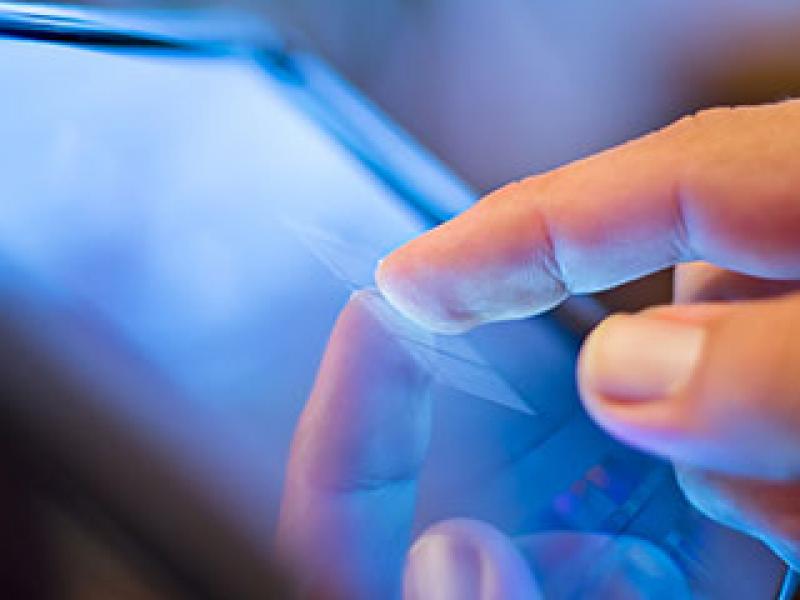 A new study from the Lighting Research Center (LRC) at Rensselaer Polytechnic Institute shows that a two-hour exposure to electronic devices with self-luminous “backlit” displays causes melatonin suppression, which might lead to delayed bedtimes, especially in teens.

“Our study shows that a two-hour exposure to light from self-luminous electronic displays can suppress melatonin by about 22 percent. Stimulating the human circadian system to this level may affect sleep in those using the devices prior to bedtime,” said Figueiro.

The actual melatonin suppression values after 60 minutes were very similar to those estimated using a predictive model of human circadian phototransduction for one-hour light exposures. “Based on these results, display manufacturers can use our model to determine how their products could affect circadian system regulation,” said Figueiro.

The results of this study, together with the LRC predictive model of human circadian phototransduction, could urge manufacturers to design more “circadian-friendly” electronic devices that could either increase or decrease circadian stimulation depending on the time of day—reducing circadian stimulation in the evening for a better night’s sleep, and increasing in the morning to encourage alertness. In the future, manufacturers might be able to use data and predictive models to design tablets for tailored daytime light exposures that minimize symptoms of seasonal affective disorder, and sleep disorders in seniors. Individuals would be able to receive light treatments while playing games or watching movies, making light therapy much more enjoyable than just sitting in front of a light box.

Melatonin is a hormone produced by the pineal gland at night and under conditions of darkness in both diurnal and nocturnal species. It is a “timing messenger,” signaling nighttime information throughout the body. Exposure to light at night, especially short-wavelength light, can slow or even cease nocturnal melatonin production. Suppression of melatonin by light at night resulting in circadian disruption has been implicated in sleep disturbances, increased risk for diabetes and obesity, as well as increased risk for more serious diseases, such as breast cancer, if circadian disruption occurs for many consecutive years, such as in nightshift workers.

“Technology developments have led to bigger and brighter televisions, computer screens, and cell phones,” said Wood, who used the study as the basis for her master’s thesis. “To produce white light, these electronic devices must emit light at short wavelengths, which makes them potential sources for suppressing or delaying the onset of melatonin in the evening, reducing sleep duration and disrupting sleep. This is particularly worrisome in populations such as young adults and adolescents, who already tend to be night owls.”

In the study, the participants were divided into three groups. The first group viewed their tablets through a pair of clear goggles fitted with 470-nm (blue) light from light emitting diodes (LEDs). This was a “true positive” condition because the blue light is known to be a strong stimulus for suppressing melatonin. The second group viewed their tablets through orange-tinted glasses, capable of filtering out the short-wavelength radiation that can suppress melatonin; this was the “dark control” condition. The third group did not wear glasses or goggles. Each tablet was set to full brightness.

In order to accurately record personal light exposures during the experiment, each subject wore a Dimesimeter close to the eye. The Dimesimeter is a small calibrated light meter device developed by the LRC that continuously records circadian light and activity levels. Last year, international magazine The Scientist named the LRC’s Dimesimeter as one of the “Top 10 Innovations of 2011.”

The research team established that duration of exposure and the distance between the eye and the display, which determines the amount of light reaching the back of the eye, affects melatonin levels. Melatonin suppression after a one-hour exposure to the tablet was not significantly affected. However, after a two-hour exposure there was significant suppression.

The type of task being performed on the tablets also determines how much light is delivered to the cornea and, therefore, the impact on evening melatonin levels. As shown by the team’s Dimesimeter measurements, the range of photopic illuminance levels at the cornea from the tablets alone varied from 5 lux, which is not likely to affect melatonin, to over 50 lux, which would result in measurable melatonin suppression after a two-hour exposure. Therefore, before any generalizations can be made, it is important to measure how much light one is receiving from these self-luminous devices.

Until manufacturers develop more “circadian-friendly” electronic devices that increase or decrease light exposure based on time of day, Figueiro has several recommendations to reduce their effects on sleep. “We recommended dimming these devices at night as much as possible in order to minimize melatonin suppression, and limiting the amount of time spent using these devices prior to bedtime.”

The study was funded by Sharp Laboratories of America.